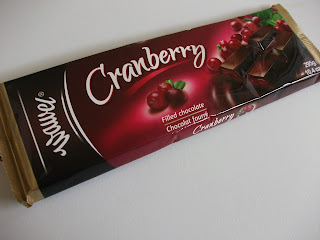 Tk Maxx is an unusual store. Despite it's odd jumble-sale like way of storing clothes, it can be a treasure trove for imported and European snacks. When I spotted this Wawel Cranberry filled chocolate bar there recently, the maroon red packaging was tempting me to buy it, even though I've found some of Wawel's chocolates to be poor quality in the past.

The bar is described as "Chocolate with cranberry-cocoa filling" and comes in a large 295g block. It cost £1.99. Opening up the wrapper it looked very damaged and was broken into several pieces: 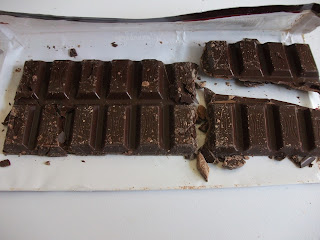 Not a good start, although I guess it's understandable since it was imported from Poland.

Unfortunately it didn't taste very good at all. The chocolate was cheap and poor quality, with a slightly waxy texture. The cocoa filling was quite plain and tasteless, a characteristic of fillings that rely too much on vegetable fat. The Cranberry jam layer was the only real saving grace - it was nice and tangy, and oddly it went well with the cheap dark chocolate. It was the best thing about the bar and I tried to scrape it away from the cocoa filling to eat it by itself, which proved a bit difficult. 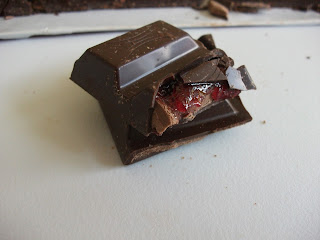 Other flavours in this range include Orange, Strawberry, Tiramisu and Lemon. I'm actually quite interested in the lemon flavour despite my poor experience with this bar, so if anyone spots one in the UK please let me know in the comments!