- July 22, 2013
I've had a lot of snacks reviews building up for a while now - things that get left by the wayside as newer, more interesting snacks get released. In light of Grocery Gem's fantastic Random Reviews posts I thought I'd do something similar, so here's introducing Kev's Pick & Mix: an assortment of mini snacks and drinks reviews! 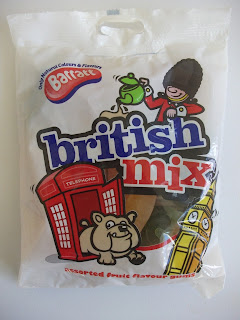 I don't think these are available in shops anymore, I found them several months ago in Discount UK and they were a month out of date at the time. They tasted slightly stale but came in some interesting "British themed" shapes, such as teapots, red telephone boxes, Queen's guards, Bulldogs and Big Bens: 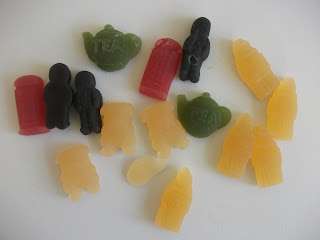 They appear to have been a limited edition release to co-incide with the olympics and Royal Wedding last year. 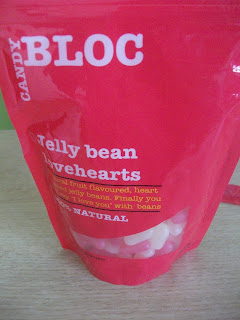 "Bloc" branded sweets are available from Asda stores, but I've also seen a lot of their range in discount stores such as B&M Bargains and Poundland. I picked these up for 89p at B&M and thought they sounded interesting - they come in heart shapes rather than a regular bean shape, which is quite novel. Unfortunately they didn't taste too great - they were far, far too sweet and had no real distinctive flavour. On the plus side they were made with 100% natural ingredients, are gluten free and vegetarian, which is something I guess! 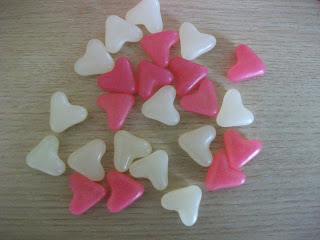 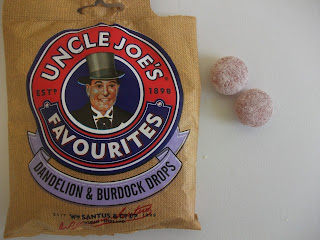 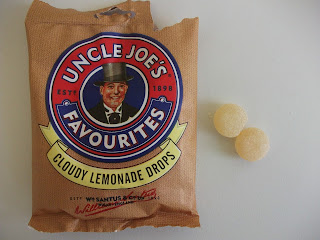 As well as the above Uncle Joe's D&B Drops I also saw this cloudy lemonade variety. I didn't like them as much as the dandelion and burdock - they were a little too mild tasting. 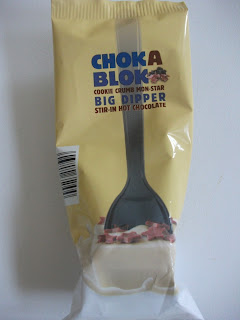 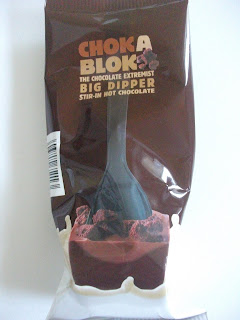 A few months ago I won a Twitter competition for Tesco's "Chokablok Big Dippers", which are blocks of chocolate you stir into hot milk to make luxurious hot chocolate. I enjoyed both flavours - the "Chocolate Extremist" was very chocolatey and rich, and came complete with little brownie pieces. The white chocolate "Cookie Crumb Mon-star" was very creamy, milky and had a subtle vanilla taste. Both flavours made for tasty hot chocolates. 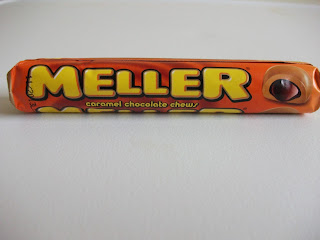 I discovered these Meller toffees in a newsagent and thought they were a new product at first. But they appear to just be a Perfetti Van Melle (makers of Fruittella) version of Cadbury Chocolate Eclairs. And they were much, much inferior - the caramel was far too hard, whilst the chocolate tasted unremarkable. 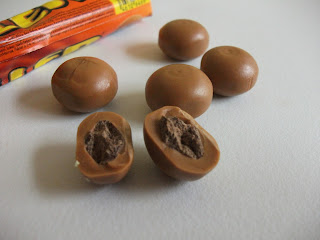 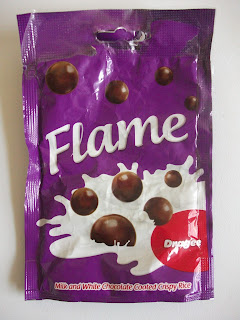 Thankyou to Bring Back Banjo Choc for alerting me to "Flame" branded products which are available in Poundland and other discount stores. They do a wafer bar which is similar to the sorely missed Banjo chocolate bar (please sign the petition here to bring it back!), and also these milk & white chocolate coated crispy rice dragees. I found them in Family Bargains for 99p, and although they weren't anything amazing, they were still a moreish snack. They're a bit like a smaller version of Maltesers; very crunchy, and it's easy to munch through loads at once. 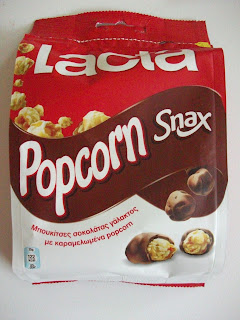 I also found these in Family Bargains and they instantly reminded me of Cadbury Choc full of Popcorn that we get in the UK, as well as Milka Pocorn Snax from Germany. And they were indeed exactly the same thing. They're made by Mondelez/Kraft in Greece and tasted much, much nicer than the UK's Choc full of Popcorn. The chocolate was creamier and the popcorn had a fresh crunchy taste, with a nice lick of salt and buttery caramel. They were 99p at Family Bargains - highly recommended! They also do Lacta Crispy Snax which are the same thing as Cadbury choc full of Clusters. 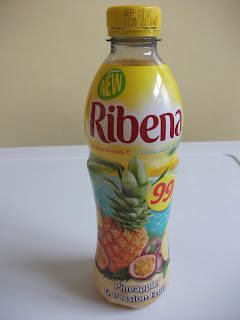 I was a big fan of Ribena as a kid, especially the various different spin-off flavours they did such as Strawberry, Blueberry, etc. When I saw this Pineapple & Passionfruit version it brought out the kid in me again and I just had to try it. It was very nice, although I hoped for a stronger flavour. For a proper review of this check out The Review Addict's post here. 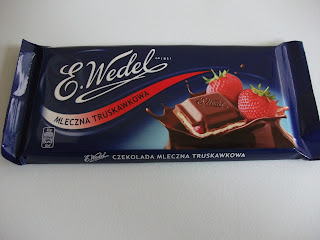 I found this Wedel bar in my local Import store, and it was reduced in price so I had to give it a try. It contains a cream filling with a layer of strawberry jam on top. It tasted pleasant enough but was nothing amazing. As well as import stores it's available from Tesco, who also sell a Cherry version. 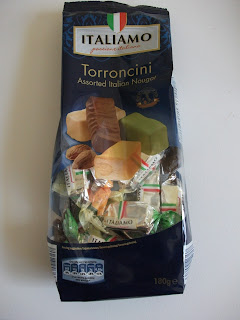 I found these Italian-style nougat chews in Lidl. They contain almonds and come with 4 different flavoured coatings: lemon, pistachio, milk chocolate and white chocolate. They were very chewy and moreish and I enjoyed the different coatings, the lemon in particular. I would highly recommend them as a good snack for watching TV with. There wasn't enough in the bag for my liking, or maybe I just ate them all too quickly! 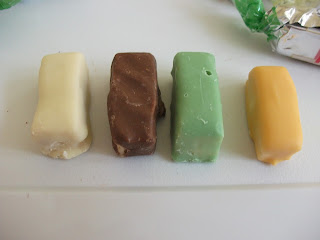 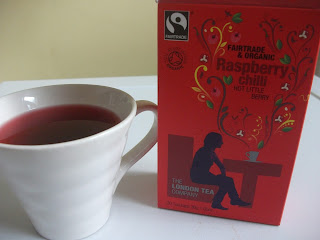 I don't usually feature teas on this blog but I thought this one from "The London Tea Company" was interesting. It has a subtle hint of chilli which compliments the fruity raspberry flavour nicely - it's refreshing and gives a warming chilli kick. The London Tea Co's teas are all fairtrade and organic. 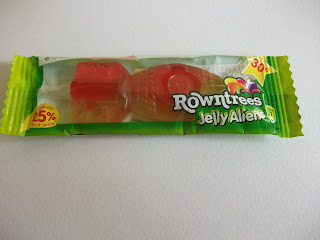 I bought this from a discount store on offer of 5 for £1. Rowntree's "Jelly Aliens" come in different shapes, and although this jelly rocket is technically not an alien, I guess it's alien themed so I won't knock Rowntree's too much for it. Taste-wise, it was fruity and very chewy. 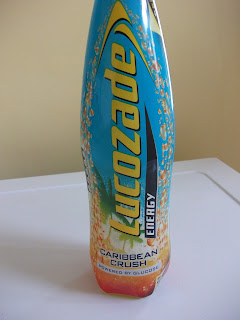 When I was a kid, Lucozade was considered a treat and only really came in the original and orange flavours. Nowadays there's a wide variety of Lucozade flavours such as blackcurrant, apple, cherry and now this tropical "caribbean crush" version. I thought this was a nice one-off Lucozade flavour but I much prefer the original. 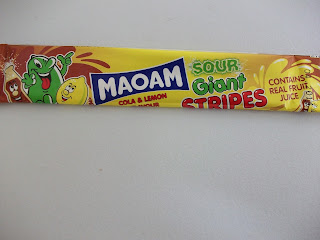 I found these Maoam Sour Giant Stripes in B&M for 10p. They tasted very nice - lovely and chewy with a zingy lemon and cola flavour. They contain real fruit juice, which is always a plus!