Showing posts from November, 2015
Show All

Ben & Jerry's have brought out a few new ice creams this year, exciting ones like Cinnamon Buns & Pumpkin Cheesecake, but sadly I can't eat those as they contain gluten. Boo! Luckily this new "Save our swirled" variety doesn't, so I had to give it a try when I spotted it recently! It contains "Raspberry ice cream with marshmallow & raspberry-blackberry swirls & Chocolatey cone pieces". I wasn't too sure how this would turn out really, I haven't had raspberry ice cream in ages, so had pretty much forgotten what it tasted like. Well, I was very pleasantly surprised, this ice cream was delicious! My first thought was "it tastes like jammy dodger ice cream". I dont know why, since it doesn't contain biscuit and I don't eat jammy dodgers anymore (gluten!), but the strong sweet raspberry flavour is very reminiscent of the jam in Jammie Dodgers. I absolutely loved this ice cream. The raspberry blackberry
1 comment
Read more 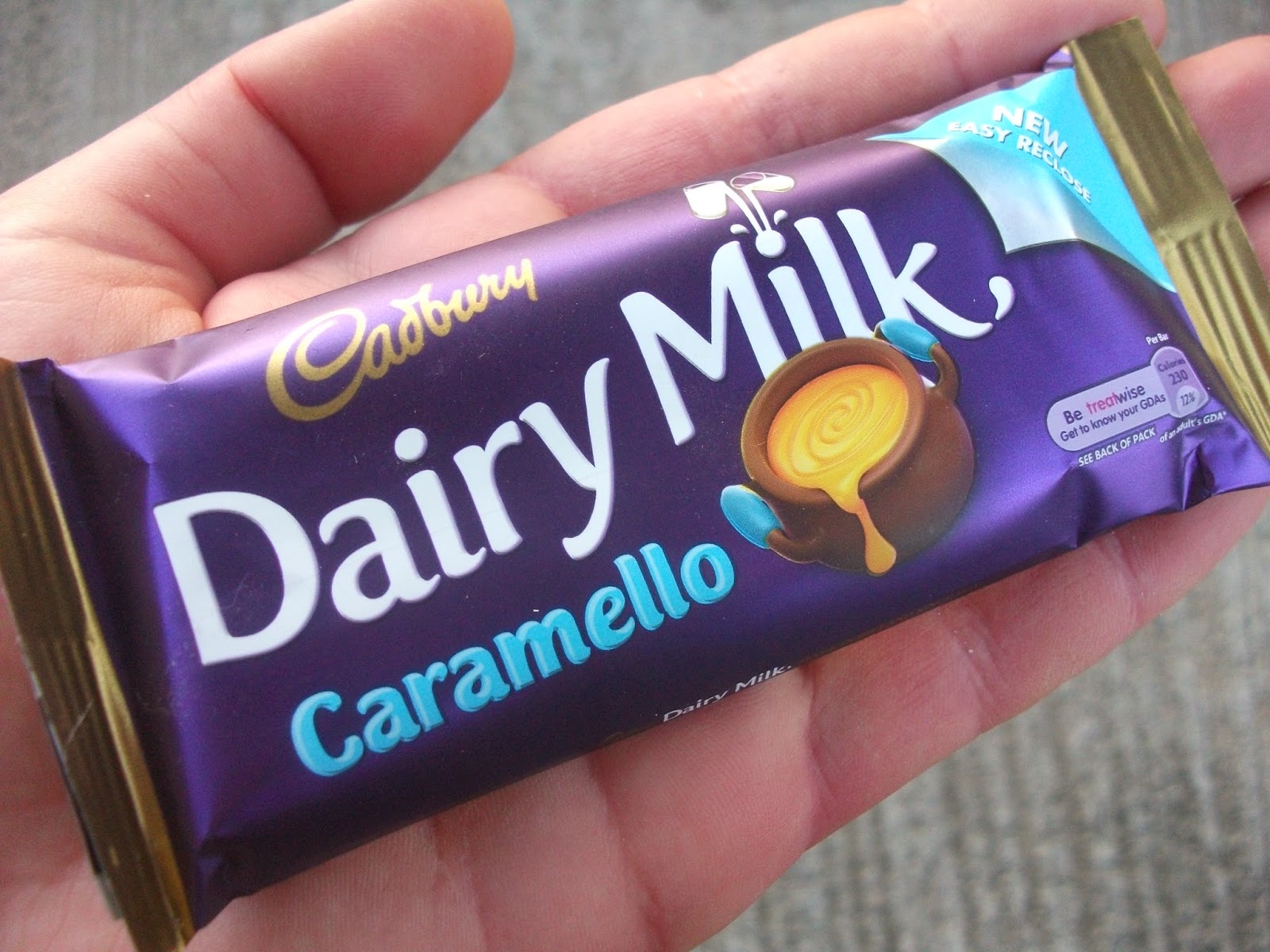 Some time ago a blog reader requested that I review the Irish Dairy Milk Caramello, and since it apparently tastes nicer than our UK Dairy Milk Caramel I just had to give it a go. I managed to find a bar from Morrisons for around 95p - not cheap for a small bar, but if the chocolate tastes good who cares? It comes in 8 small blocks that are somewhat square shaped, but not quite. It certainly looked better than the silly "curve shaped" blocks that Cadbury/Mondelez have introduced to UK Dairy Milk bars! It also smelled somewhat different to UK Dairy Milk...somewhat richer and more chocolatey and creamy - like the Dairy Milk we all used to love before Mondelez tampered with the recipe! (They claim they haven't changed it, but it seems different to me...perhaps they're using a different milk supplier now?) Breaking off a piece, the caramel oozed out and had a lovely aroma. And it tasted gorgeous...a little more sticky than the UK version, but a lot more flavoursome
2 comments
Read more

Whilst in Sainsbury's recently I noticed they had a few new interesting bars in their own brand range, amongst them this White Chocolate Strawberry Creme bar. As a long time fan of white chocolate I just couldn't say no! The bar cost £1.29 which is very reasonable for a large 180g slab of chocolate. It's also fair trade which means it's good for the old conscience too...double win! The white chocolate contains a sticky strawberry fondant center with 0.7% strawberry...not a lot, but enough to give it an authentic strawberry flavour. The blocks were rather chunky and thick, each one giving a satisfying mouthful of creamy chocolate. I really enjoyed this bar, the white chocolate is comforting and creamy but of course, very very sweet! It's not the best quality white chocolate around but it's pretty decent for the price. The strawberry fondant just adds to the sweetness of course but brings it a refreshing fruity edge, making the bar very sweet over
1 comment
Read more

It's no secret that I've been trying to quit the sugar recently, and to that end I've been trying a lot of different dark chocolates that contain none. They can sometimes be too bitter, so when I heard that Chocologic were launching in Tesco with their stevia sweetened chocolate I was overjoyed! In fact I nipped over as soon as I knew these were available! Glancing at the ingredients I noticed the chocolate contains "alimentary fibres" which consist of dextrin, inulin and oligofructose. Presumably these are a bulking agent, since the chocolate contains only 55% cocoa. 4 segments of the bar contain 2.5g of carbs and 0.4g of sugars. That's a very low amount of sugar for chocolate, although 4 segments is a very tiny amount of the bar so don't be fooled. Opening the wrapper, there was a faint whiff of cocoa but it wasn't too strong. As a fan of rich dark chocolate I was surprised by this. Snapping off the top layer of 4 squares, I took a bite.
6 comments
Read more 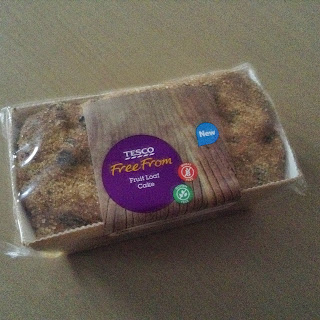 Before going on my recent sugar free diet, I tried a few different snacks which I haven't yet got round to reviewing...this new Tesco Free From Fruit Loaf Cake being one of them. I've always been partial to fruit cake so I wondered how it might taste without out the gluten. Unfortunately it turned out to be a rather dry, bland cake filled with cheap sultanas and coated with hard crunchy sugar crystals. It just wasn't very appetising at all by itself, so I ended up slathering custard all over it to make it edible. This made it easier to eat, but it was still rather bland. Come on Tesco, you can do better than this! Gluten free folk need cakes that taste just as good as the real thing! Other companies have achieved it so there's really no excuses. This is a miss for me. RATING: 4 out if 10. Are you gluten free? Have you tried this new Free From Fruit Loaf? If so let me know your thoughts in the comments!
1 comment
Read more

I originally reviewed Kingdom Chocolates a few years ago now, they brought out a range of bars proudly made in Britain (made by the same company as Montezumas) with flavours such as peanut butter and rhubarb, although I've not seen them in shops much since. I suspect the range may not have been a success and I can kind of see why...as nice as they are, they don't quite live upto what they promise. I was surprised to find this banana variety in a local independent discount store recently. I never knew such a flavour existed and it's quite a bold flavour to combine with chocolate. It's basically a milk chocolate bar with a banana flavoured softer milk chocolate center. The milk chocolate was very creamy, rich and good quality although nothing particularly distinctive. The banana flavour was pleasant, although it didn't really blend well with the milk chocolate and the whole thing became a bit sickly after a few bites. I wasn't too impressed really. I think it
1 comment
Read more

Whilst in 99p Stores recently I spotted this unique sounding chocolate bar from Lindt...with it being Papaya I just had to give it a try, it's not every day you see such a flavour combined with chocolate! It was an imported bar so had a sticker on it with the English ingredients on. Unlike most Lindt chocolate bars it didn't contain any barley malt, which means it was safe for me to eat with my gluten sensitivity. It contained a milk cream filling with a layer of papaya "jam" on top, all coated in milk chocolate. I'm not sure what I was expecting, but it wasn't quite as exciting as my imagination told me. It tasted okay, the milk filling was nice and creamy, but the papaya layer was a bit overly sweet. Papaya isn't really a great flavour to pair with chocolate really, it lacks tartness to balance out the sweetness. Overall, I'm glad I tried something a bit different from Lindt but I can see why these are in 99p stores and not sold in most super
2 comments
Read more

A few years back now, when Cadbury introduced a "Coffee Escape" chocolate to Roses I did a scathing review of them...I was shocked at how much the quality had deteriorated since I last ate Cadbury Roses. So it may come as a surprise to readers that I'm reviewing them yet again...to be honest, I only bothered buying them as they were on special offer and I needed a fix of cheap chocolate! I was also curious to see what the new addition of "Almond Caramel Bite" tasted like. I presumed it would be a bit rubbish...but actually it turned out to not be as bad as expected! The boxes have been redesigned again, with a slightly different shape and logo. I like them, they're eye catching, in fact the new shape means they look somewhat taller than boxes of Celebrations and Quality Street. They've also started using sealed packaging for the chocolates, before it was plastic twist wraps but they're now completely sealed. I have to say I think it's a g
10 comments
Read more

As a little birthday treat recently, I decided to spoil myself and give these new desserts from Thorntons a try. Thorntons are the masters of toffee and fudge, so combine that with "real Devon clotted cream" and surely they're onto a winner?! The desserts cost £1.50 at Tesco and are described as "fudge mousse with a layer of toffee fudge dessert". Each pot contains 65g which is small, but they're so tasty and rich this is a good amount. Naturally though, I ate both in one sitting...call me piggy, but I can't imagine many people would eat just one pot! It was a little difficult to distinguish between the layers as both are the same color, but the fudge layer had a nice sticky texture and was full of rich butterscotch flavour, whilst the mousse was smoother and lighter but equally as tasty. These are very indulgent desserts indeed, and far nicer than the similar Pots of Joy from Cadbury. Overall, these are a win from Thorntons, I just wish I
Post a Comment
Read more

Since it was my birthday recently, naturally I've been on the sugar again after an extended detox (don't ask!), so I finally decided to give this Dairy Free Coconut Cream dessert a try that's been winking at me from the frozen aisle of Marks & Spencer for quite some time. Coconut is the "in thing" right now, you'll find coconut oil flying off the shelves (almost literally) in Holland & Barrett, coconut milk drinks in most supermarkets, and even coconut water in your local Tesco Express. So coconut ice cream was only the next logical step really! This cost me a very reasonable £3 at M&S, and contains 30% coconut cream as well as coconut oil, sugar and maltodextrin. Like many of my snacks I ate it on the go, this time at the local park. Whilst I did get some jealous looks from the ducks and pigeons, they certainly weren't getting any! The ice cream, or rather "dessert" as M&S are calling it was frozen solid, more so than
6 comments
Read more
More posts