Showing posts from February, 2020
Show All

It seems we have a contender for the crown of Cadbury Orange Twirls aka the Most Elusive Chocolates...Mint Maltesers Buttons! These have proven very hard to find, I luckily managed to find them in WH Smith for a whopping 98p a bag and snapped up a couple, but they have since completely disappeared off shelves. They're supposed to be in Co Op stores too - but I haven't seen any in mine yet. They're similar to the regular Maltesers Buttons, with crunchy Malteser bits embedded in milk chocolate, but with a minty flavour. The mint is subtle and gentle, it blends nicely with the sweet milk chocolate and malt bits, but to be honest they didn't wow me. I think releasing actual Mint Maltesers in the UK would have been a better choice than these...but baby steps I suppose? Overall, not a bad new variety from Maltesers but I do wish they'd give us something a bit more exciting. Like White Maltesers! Who's with me? 8 out of 10.
5 comments
Read more 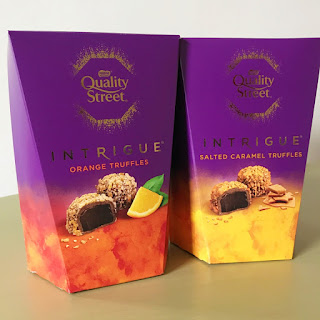 Quality Street have recently expanded their range by branching out into Lindor territory...with truffles! But they've given their own unique spin on them and these have crunchy coatings to fit with some of their classic Quality Street Chocolates. There's Orange which is a bit like the Crunchy Orange chocolate, Salted Caramel which is apparently based on the toffees, and Praline which is of course based on the Green Triangle. Sounds a bit gimmicky but they actually do fit with the Quality Street chocolates rather well. Consisting of a smooth, almost gooey truffle centre, coated in chocolate and with various crunchy coatings. The Orange was a favourite - a smooth orange flavour centre with some crunchy orange bits on top. It tastes like the orange chocolate from quality street but the truffle adds an extra dimension to it, replacing boring crunchy inner chocolate with a smooth ganache. I think I liked this better to be honest. The crunchy bits still give you the crun
2 comments
Read more 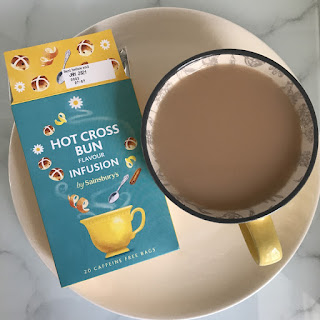 Sainsbury's sure do like to create some interesting seasonal teas don't they? Who can forget the Pigs in Blankets and Brussels Sprouts Christmas teas from a few years back? Now they have opted for something that sounds a bit more pleasing to the palate, combining the flavours of Rooibos tea, orange, lemon and spice to give that Hot Cross Bun flavour. These cost £1 a box. I'm glad they used Rooibos tea for this as it's a milder, less harsh tea that works well with fruit and spices. I was actually very surprised by this - beyond the novelty aspect it's very nice! There's a strong flavour of citrus, which is the most dominant taste and there's the gentle flavour of spices in there too. It's as close to hot cross bun in tea form as you're going to get, I suspect. Not bad at all! I've tried it both with and without milk and although it's better with milk, it's lovely without it too. Overall, a nice refreshing tea that will be very wel
7 comments
Read more 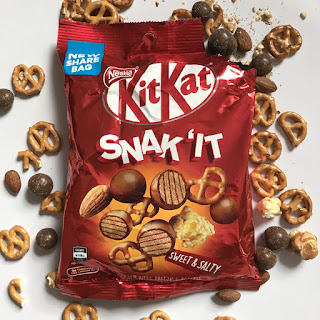 I thought it'd be fun to compile some of the latest snacks I've been reviewing over on Instagram into one post here...enjoy!  KitKat Snack 'It: An Australian concoction, these are a mixture of KitKat Bites, pretzels, popcorn and almonds. A nice mix of sweet and savoury that works rather well! Great for the cinema. I got them from Gb Gifts website (code Kevs10 gets a 10% discount). Nestle Nuts White Chocolate: A white chocolate limited edition is always worth trying, and this Russian variety of Nestle Nuts is interesting for sure...not the best quality white chocolate which is a shame but it's nice to try a milkier version of the classic nougat, hazelnut and caramel bar. Also from Gb Gifts . Cadbury Clinkers: Another treat from Gb Gifts I got were these Cadbury Clinkers, which are crunchy honeycomb like candy sweets coated in Cadbury chocolate. They're an Australian classic and quite tasty and fun, despite sounding sickly! Fruittella Gelatine Fr
5 comments
Read more 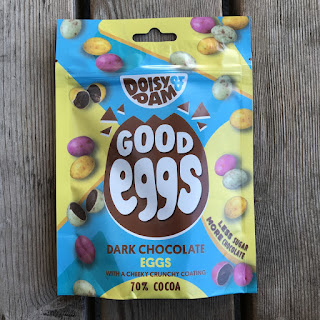 Following on from my review of the new Doisy and Dam D&D's and Ballers chocolates, I thought I'd review their new take on Mini Eggs - a vegan friendly, lower sugar dark chocolate version! You can find these in Holland and Barrett stores for £1.79 or so for 80g. They're clearly positioning themselves as a vegan alternative to Cadbury Mini Eggs, and contain 70% cocoa dark chocolate which has 30% less sugar than the leading market product (Cadbury's). It all sounds good, and thankfully even though I was very disappointed in their D&D's and Ballers range, these surprised me! They have classic Mini Egg style crunchy pastel shells, and the dark chocolate within is quite rich in taste. They're much better than the D&D's which I was surprised by, perhaps the higher ratio of chocolate to shell works in their favour. These are highly nommable, easy to eat one after the other but they do leave you feeling satisfied faster than something more sugary.
6 comments
Read more
More posts