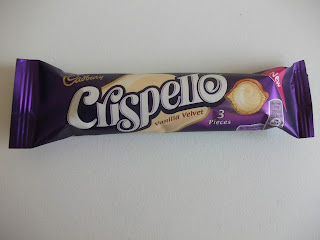 Not being a huge fan of the original Crispello launched last year, I was a tad skeptical when I heard about the launch of this new Vanilla Velvet variety. However, it really surprised me! 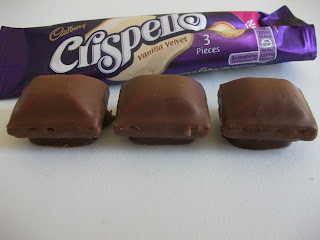 Like the original Crispello it comes with three pieces of filled chocolate-coated wafers. They're described as "Thin crispy shells with a creamy vanilla filling, covered in Cadbury milk chocolate".

Opening the wrapper the chocolates had that unmistakable Cadbury chocolate aroma. Cutting into one revealed the creamy vanilla centre, which was very plentiful. It reminded me somewhat of a Kinder Bueno. 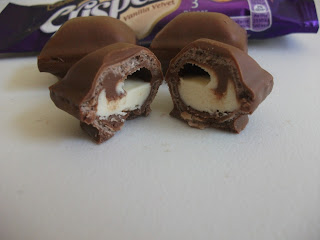 Taste-wise, the filling was very creamy and went perfectly with the light wafer and milk chocolate. The flavours were a lot more subtle and creamy than a regular Double Choc Crispello, and I much preferred this combination. I think vanilla is the perfect pairing for a "lighter" chocolate such as this - it allows the other constituents such as the wafer to shine through much better.

Overall, I thought this was a great addition to the Crispello range and would buy it again. It may be aimed at the ladies, but I'm sure many men would be happy to have a sneaky few of these with a mid-morning cuppa too!