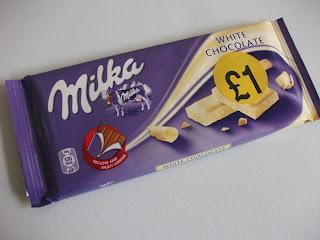 Whilst at WH Smith recently I noticed this "Milka White Chocolate" near the self-service tills. I haven't had Milka's white chocolate in years (since I last visited Germany, infact) so I was very happy to see it.

I'm not sure if this bar is exclusive to WH Smith but I haven't seen it in any supermarkets. I should point out that it's made in Germany, and not to be confused with the Polish white chocolate Milka found in import stores. Apparently German and Polish versions of Milka products taste different, with the Polish one being inferior.

Opening up the wrapper the bar smelled very milky and sweet, a little similar to Milkybar infact. 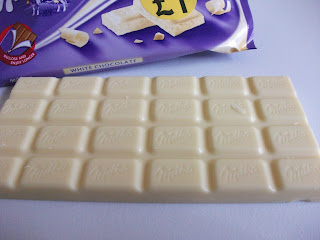 Taste-wise it surprised me. I was expecting it to taste overly sweet but it was actually quite creamy and had a distinctive flavour all of its own. It was still very sweet, of course, as most white chocolates are, but there was a certain "something" that made it enjoyable to my tastebuds. There was a definite vanilla undertone. It reminded me a little of Milkybar, but perhaps not quite so sweet. 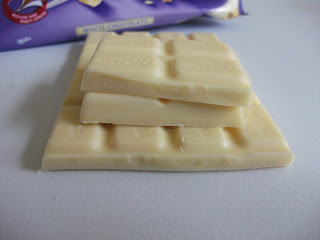 Overall, if you're a fan of white chocolate and can tolerate the sweeter mass-produced stuff like Milkybar, I would recommend giving this Milka white chocolate a try. It makes a nice change and is a decent bar of white chocolate for a mass market brand. It costs around the same as Milkybar too, which is usually £1 in most shops.