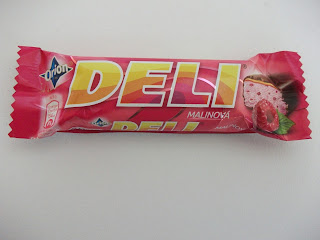 Here we have the Orion Deli Raspberry. Deli is a sub-brand which is owned by the Czech arm of Nestlé, and the bars comprise of nougat fillings - somewhat similar to what you get in a Mars or Snickers - with a thin layer of caramel plus a chocolate coating.

This variety comprises of raspberry flavoured nougat and caramel. Opening the wrapper, the bar smelled overwhelmingly like cheap kiddies raspberry drinks - rather artificial and overpowering. I cut the bar in half and the centre looked very pink: 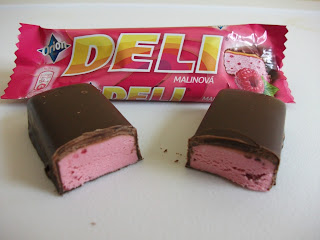 The taste was rather as I expected - very artificial. It's the sort of thing you would expect from such a cheap chocolate bar, but I actually kind of enjoyed it! It was chewy and had a nice tang to it. The caramel didn't really add much to the bar, it was rather tasteless although it did provide a bit of extra chewiness. The chocolate coating was unremarkable - it just tasted like standard Nestlé milk chocolate really. There were some bits of dried raspberry in the nougat, which added a bit of crunch. 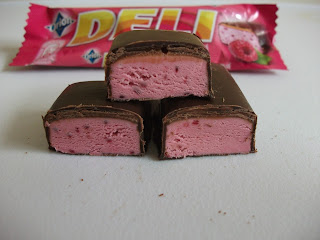 Overall, although I didn't love this bar I kind of enjoyed it for what it was. Deli bars have a certain charm to them - the ingredients may be cheap but the combination of flavoured nougat, chewy caramel and chocolate just works somehow. If they were made with better quality ingredients they'd be fantastic!

Price: About 50p in Import store.
Made by: Nestle.cz
Nestlé Orion