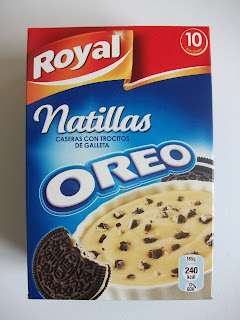 B&M Bargains sell some unusual stuff. I've found Meerkats Jellies, Jellyatrics, Nestle Holiday biscuits and Orange and Mint flavour After Eights there, amongst other things. They're always turning up something new and interesting - usually imported - so I wasn't really surprised when I spotted this "Royal Natillas Oreo" custard dessert mix there recently. It's basically just a packet of custard with a packet of chopped up Oreos to mix in...but at 39p a box I could hardly say no!

I'm not familiar with the "Royal" brand but it appears they are owned by Kraft Foods. The writing on the box was all in Spanish but the instructions to make the dessert were on a sticker with an English translation. 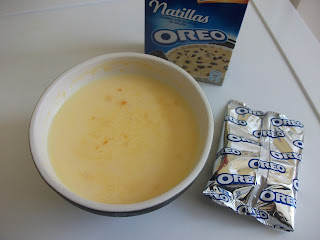 I did my best to make the custard according to the instructions, but it proved difficult as they'd been badly translated. I ended up with a watery, lumpy custard. Luckily the crushed Oreos saved it somewhat, but it still tasted far from amazing. 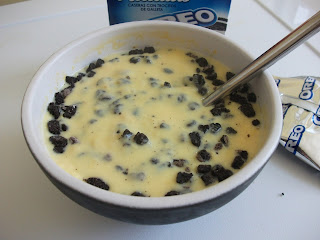 Overall, this Oreo Dessert is a bit of a gimmick really - anyone can crush Oreos and add them to custard, so the two needn't be sold together. If you're a fan of Oreos you might want to check these out, but otherwise I wouldn't recommend them.

Have you tried these Oreo Custard Desserts? If so what did you think?
Kraft Oreo