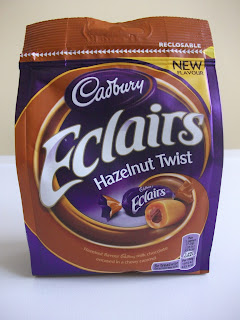 I mentioned in my review of Milka Toffees on Monday that I was looking forward to trying these but didn't expect to find them quite so soon! I spotted them nestled unassumingly amongst the regular Cadbury Eclairs on a shopping trip to Morrisons, so quickly snapped up a pack. They're currently on offer there for £1.

The Eclairs come in the new resealable packs that most of Cadbury's bagged chocolate range now comes in, and are described as "Hazelnut flavour Cadbury milk chocolate encased in a chewy caramel". 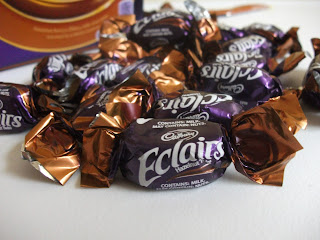 Aesthetically, they look pretty much identical to regular Cadbury Eclairs: 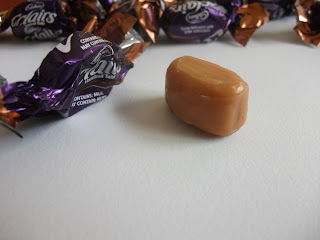 Cutting one open revealed the chocolate and hazelnut flavoured centre, which was slightly crumbly: 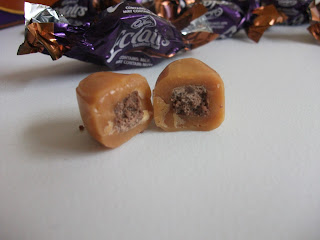 Taste-wise, the caramel was very sweet and chewy, whilst the centre had a strong chocolatey hazelnut flavour. I would like to say that it tasted similar to Nutella, but it was a lot milder. Probably due to the fact that these Eclairs don't actually contain any hazelnut - the ingredients only lists "flavourings".

Overall I thought these were a decent new product from Cadbury (or Mondelez UK, as they're now called) - it's about time Eclairs got a new flavour variation, and I hope to see more in the future. Perhaps mint, or even coconut?

There's also an Orange Twist version of Eclairs, please check out my review of them here.