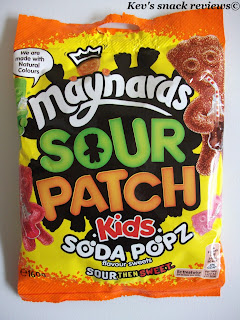 Whilst shopping in Morrisons recently I found these Sour Patch Kids Soda Popz on an Introductory Offer for £1.50. Being a fan of the original Maynards Sour Patch Kids (and a lifelong fan of Maynards sweets in general), I had to give them a try.

The concept of these is simple but exciting - they're different "pop" flavoured gums which start off sour and turn sweet. The sourness presumably comes from the malic acid sugar coating. 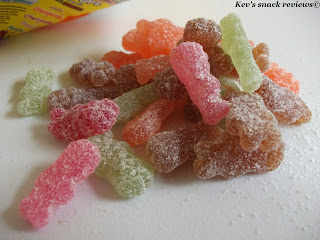 The flavours are Cola, Orangeade, Cherryade, Tropical and Apple Fizz and they're all made with natural colours. Taste-wise they were all very nice, starting off sour as promised and then gradually revealing a fruitier, sweeter side.

The Cola flavour tasted just like fizzy cola bottles - those famous sweets we all remember from childhood. Infact there seemed to be a surplus of Cola as well as Orangeade flavours in the bag. I'm not complaining, but it would've been nice to have more of the other flavours!

The Orangeade flavour was very good and tasted sour and orangey, recreating the flavour of orangeade successfully.

The Apple Fizz flavour was also very good - it tasted refreshing and wasn't too sour like most apple flavoured sweets often are.

The Tropical flavour was interesting - it's coloured pink and tastes of pineapple and grapefruit. It reminded me of Lilt, which I'm guessing is the "soda pop" it's supposed to recreate.

On the whole though, I think these flavours were very successful and they all fitted with the "Soda Pop" theme nicely. I'm surprised they didn't have a Lemonade flavour though as it's one of the most common "pop" flavours around!

Overall, these are some tasty gummy sweets and a good addition to the UK Sour Patch brand. If you're a fan of Cola Bottles or fizzy sweets like Haribo Tangfastics I would recommend them.