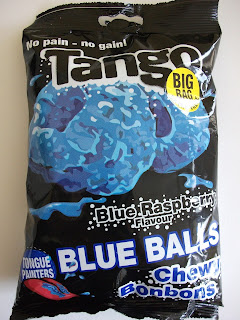 When I spotted bags of these Tango Blue Balls sweets in Discount UK, I was intrigued. I'm sure most people have heard of the term "blue balls" before so I needn't explain anything! The picture on the wrapper is supposed to be of two blue raspberries, but considering the name of this product I think they're meant to resemble something else..?

The sweets are described as "Blue raspberry flavour chewy bonbons", and are basically hard chewy sugar bonbons with flavourings and colours.

The wrapper says "No pain - no gain!" which had me thinking they would be extremely sour. It also describes them as "Tongue painters" as they turn your tongue bright blue, and I can confirm they did indeed have this effect. However they weren't very sour at all so I'm not sure where the "pain" aspect comes in. 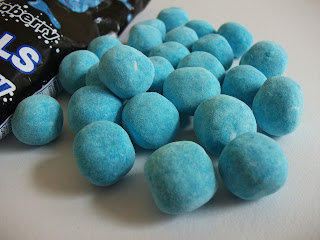 They tasted slightly of raspberries, but the overriding flavour was of chemicals and sugar. They weren't very pleasant. They were also far, far too hard and chewy. Presumably the main selling point is supposed to be the blue tongue effect, which they are certainly very effective at, but why anyone would buy sweets to make their tongue blue is beyond me! 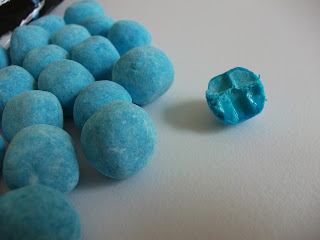 Overall I wasn't really a fan of these. They tasted a bit cheap and artificial, and leave your tongue looking like you've snogged a smurf. The makers have used some dodgy marketing to sell them and once the novelty wears off, all you're left with is a cheap product!

Have you tried Tango Blue Balls? If so what did you think of them?
Tango