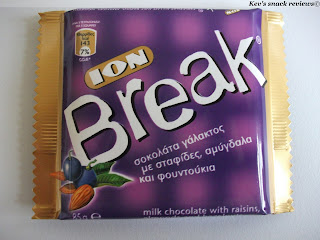 A hat-tip to Marcus who does the fantastic Choc It Out! video series on Youtube for alerting me to this bar. He found one in Sainsbury's and ever since he mentioned it on Twitter I've been on the lookout for one. Alas, my local Sainsbury's didn't seem to stock them but luckily I found some in the world food's section of Tesco instead.

Ion is a Greek chocolate brand with a range of different bars, but the ones available at Tesco were this Milk Chocolate with raisins, almonds and hazelnuts, as well as a plain Milk Chocolate bar.

This bar comes in a square block similar to Ritter Sport bars, and each chunk has the word "Ion" printed on it. The chocolate smelled very nice when I opened the wrapper - sweet and milky. 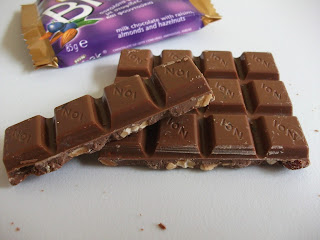 Taste-wise it was nice but nothing groundbreaking. The chocolate was milky and rich but also quite sweet. The raisins were tangy, and the almonds and hazelnuts added a nice crunch. But to be honest I didn't think the chocolate was all that special; it tasted a bit like supermarket own-label chocolate. Which is no bad thing, but it lacks that "je ne sais quai" to make it stand out over other chocolate bars. 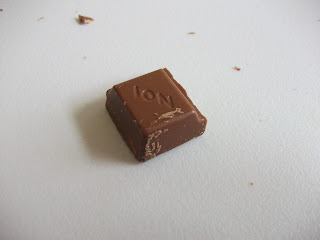 Overall, a nice chocolate bar but unless they bring out other flavours in the UK I'm not sure I would buy one again. It was worth trying the once though and it's certainly not a bad chocolate; it just lacks any truly distinguishing features.