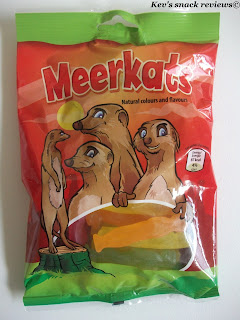 "Oh no, they've turned them into sweets now!" was my first thought when I saw these Meerkats Jellies in B&M bargains.

If you're from the UK I'm sure you'll know what I mean. Meerkats have become a "thing" here thanks to those annoying "Compare the meerkat" adverts (there's even a wikipedia page for them: http://en.wikipedia.org/wiki/Compare_the_Meerkat). As if the adverts weren't enough, they've branched out into soft toys, t-shirts, posters, books and other such rubbish. And now sweets!

Despite hating the adverts I grudgingly bought these just to see if they tasted any good. I wish I hadn't bothered because they turned out to be as bad as the adverts!

Opening the pack I knew something was wrong because they smelled very chemically. Which is odd, because on the front of the pack it says they contain natural colours and flavours. Yet the ingredients lists several different E-numbers. I never realized E-numbers could be considered natural! 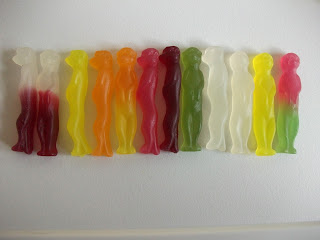 They tasted very chemically and had an unpleasant after-taste. They were also annoyingly chewy which didn't help matters. I tried tasting each flavour individually and some were ok; the green and red one had a nice apple flavoured sour tang and the yellow one tasted of citrus. But the chemical aftertaste quickly ruined the flavour.

Overall, these are one to avoid. They're simply a cheap product cashing in on the meerkat "thing" and there are far better sweets for a similar price sold in most discount stores, including B&M. Simples!