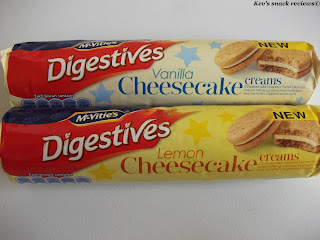 When I heard this new variety of McVitie's Digestives were available at Tesco (hat-tip to Bring Back Banjo chocolate bar) I just had to track them down. They reminded me of a comment I made in my review of McVitie's Double Chocolate Digestives earlier in the year, which was: "I wish they would do something like a lemon cheesecake digestive, now that would be truly something".

Now either I'm psychic and sensed they were planning to introduce this new variety, or McVitie's read my comment and pinched my idea! I think I should start copyrighting them! ;)

These Digestives come in both vanilla and lemon cheesecake flavours, and are basically small digestive biscuits with a sweet cream cheese layer sandwiched in between. They're described as "wheatmeal biscuits with vanilla/lemon and cream cheese flavour filling".

Vanilla:
On opening the pack these smelled lovely; very wheaty and with a familiar comforting digestive biscuit smell. There was also a slight aroma of cream cheese, making them even more tempting.

They tasted as nice as they smelled. The cream was similar to what you get in a custard cream, but not as sweet and with a much creamier taste from the cream cheese. It was slightly tangy and did somewhat resemble cheesecake, at least as much as a biscuit containing 4.5% cream cheese can. They tasted great dunked in coffee!

Lemon:
This lemon variety was even tastier than the vanilla. The cream cheese filling was complemented with a lovely zingy lemon flavour, which gave it a light, fresh taste. I enjoyed them a lot more than the vanilla variety and soon munched through most of the pack!

Overall, I think McVities's are onto a winner with these cheesecake-inspired Digestives (thanks to pinching my idea! haha ;)). Both flavours are really tasty and offer something unique as far as biscuits go. My only complaint is that they were too small!