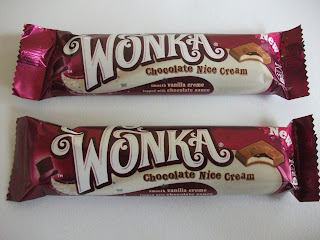 At last...the new Nestlé Wonka bars have been released into the wild! I spotted this Chocolate Nice Cream variety in B&M Bargains for 69p, which is considerably less than the extortionate 90p I paid for the Millionaires Shortbread version I found in a newsagents last week. 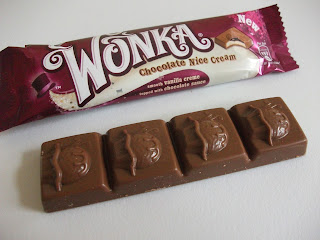 I bought two bars...just for reviewing purposes, you understand! I didn't open them soon as I'd bought them, though; instead I let them languish in the cupboard for a while. I suppose I wasn't too excited about trying them since I found the Millionaire's Shortbread variety so disappointing. 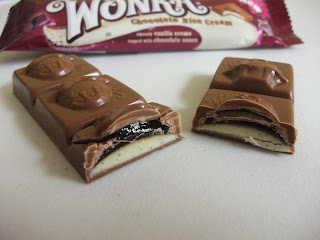 When I had the munchies for something sweet I finally broke into one. The bars are described as "Smooth vanilla creme topped with chocolate sauce", with 30% of the bar being creme and 15% being sauce. Biting into a piece, I was first met with the vanilla creme. It tasted pleasant enough, with a decent vanilla taste, but was intensely sweet. It contained real vanilla seeds which gave it a speckled look, although I'm not sure they enhanced the flavour all that much. The chocolate "sauce" portion tasted ok, infact I rather liked the sticky gloopyness as it added something different to the mass of sweet vanilla creme. It made me wonder though why the Millionaire's Shortbread bar didn't have a sticky filling like this too. 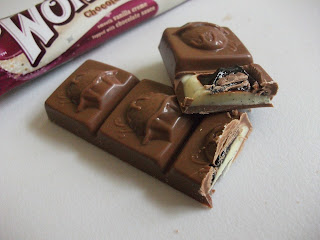 One thing I liked about this bar is that the blocks look a bit more interesting than those of the Millionaire's Shortbread - each one has what appears to be a dish of ice cream with chocolate sauce poured over it, although at first I thought it was meant to be the Wonka top-hat symbol. It's a small touch, but goes a long way to making the bar more interesting.

Overall, this is an ok bar of chocolate but it was too sweet for me and I certainly didn't think it was exciting enough to befit the Willy Wonka name. I'm still curious about the Crème Brûlée bar - which is due for release next month in large-format only - but can only imagine what sugary horrors await...