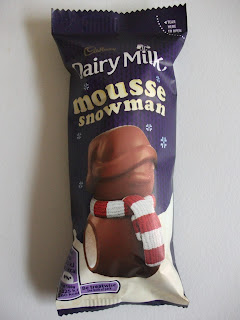 Christmas products in September - what kind of insanity is this?! It all started with the new Cadbury Wishes Little Wishes I reviewed the other week, and the early xmas onslaught continues with this new vanilla mousse-filled chocolate snowman from Cadbury.

I say snowman, but it's a pretty poor excuse for a snowman if you ask me. The shape is rubbish. It's not cute, it's not realistic...it doesn't even have a face! It's almost as though they found a cheap baking mould in a discount store and thought: "this'll do for our chocolate snowman this year". 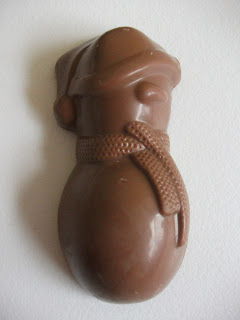 Sorry to be such a scrooge but...it looks so boring! I wouldn't have minded if the chocolate itself didn't taste quite so boring too. 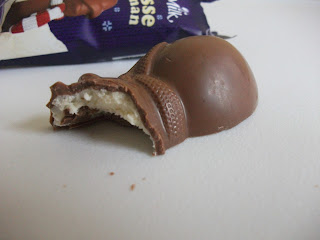 Opening the wrapper the chocolate smelled very sweet and typical of Dairy Milk, although I could have sworn it wasn't quite its usual distinctive chocolatey self. I hope Cadbury's aren't skimping on chocolate-quality as well as mould-quality! 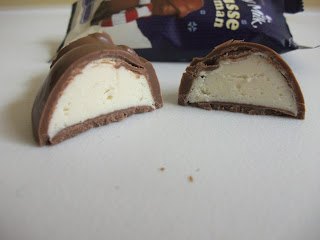 Biting the head off (chocovore that I am!), I expected an explosion of vanilla creaminess, but was met with an overload of sugary milkiness instead.The flavour of the mousse was very sweet and overbearing, without any subtlety or gentle vanilla flavours. I had hoped it would be like the vanilla mousse from Cadbury Egg 'N' Spoons, but alas, the flavour seemed to be much sweeter and nowhere near as good.

Overall, I was unimpressed with this Dairy Milk Mousse Snowman. It could have been so much nicer if only they'd used a creamier filling with less sugar in it.

I'm interested to see how the "Merryteaser" christmas offering from Mars will compare to this. It's supposedly like the Malteaster Bunny but in a reindeer shape - now surely that can't go wrong!