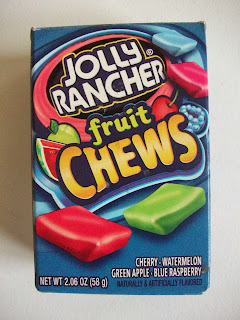 When I saw these Jolly Rancher fruit chews reduced to 50p in a local department store I couldn't resist buying a pack. They usually cost a lot more in import stores so this was a real bargain indeed! They were only just past their best before date, but this didn't bother me since sugary sweets usually keep for ages. 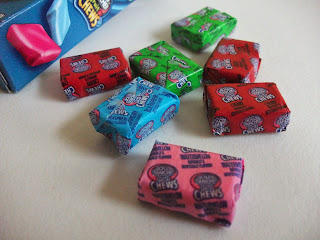 There were 4 different flavours in the box: Green Apple, Cherry, Watermelon and Blue Raspberry. They contain both natural and artificial flavourings. Here are my thoughts on each flavour -

All in all, these Jolly Rancher sweets were a mixed bag. Some of the flavours were nice whilst others were spoilt by the artificial flavourings. The blue raspberry one is just awful and I don't get why they had to include such a flavour - raspberries aren't meant to be blue!

All that said, on the plus side I will say that these are much more strongly flavoured than most UK chewy sweets. This is probably due to the artificial flavourings, but sometimes that's what you want from sweets like this!

Price: 50p (reduced)
Suitable for vegetarians?: No - contains gelatin.
Nutrition (per package): 200 Calories, 20g Fat, 46g Carbohydrate.
Made by: Jolly Rancher are made by The Hershey Company.

RATING: 6 out of 10.
Hershey's Jolly Rancher