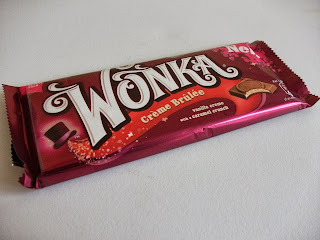 At last, all the new Wonka bars are out in shops! This Crème Brûlée variety is unfortunately only available in large 100g blocks, but I found one in Tesco recently for £1.40.

After my disappointment with the Millionaires Shortbread and Chocolate Nice Cream varieties I was hoping this bar would be the one gem of the three. And although it was much better than the other two, it's still not exciting enough to do the Willy Wonka name proud.

It's described as simply "Vanilla creme with a caramel crunch" and has an eye-rolling rhyme on the pack: "This isn't the only Wonka bar, you'll find the others near and far; Millionaires Shortbread and Chocolate Nice Cream, they came to Wonka in a dream".
The packaging has a rather cool resealing mechanism, with a Wonka tophat "peel here" sticker on the end: 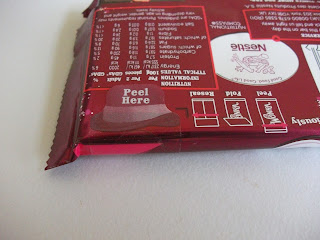 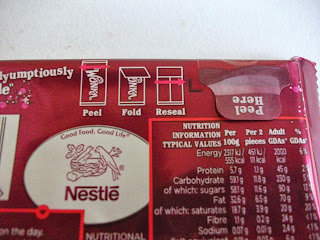 It can be peeled off, then the wrapper can the be folded over and resealed. This is handy for keeping the chocolate fresh should you wish to save some for later, which you'll probably want to considering the calorie content - the bar contains 555 Calories and 32.6g Fat per bar! (I can kind of understand the fuss The Daily Mail made about these now!)

The blocks look quite interesting; they have a rounded shape with the Wonka "W" symbol on every other piece: 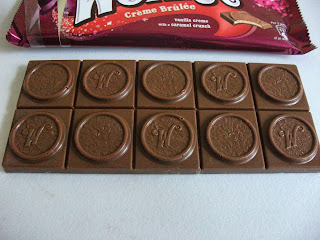 Cutting the bar in half revealed the vanilla creme and crunchy caramel: 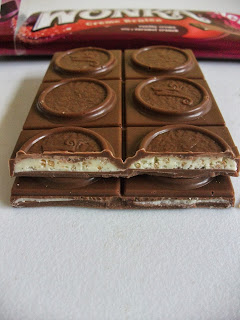 The chocolate tasted like standard Nestlé stuff - sweet and milky, whilst the vanilla creme was very smooth and had a fairly realistic vanilla flavour. This is due to containing real vanilla seeds in the ingredients. The caramel pieces added a nice burnt caramel crunch, similar to what you get in real Crème Brûlée. All of these flavours combined together for a chocolatey, creamy, crunchy and sweet treat, which was simple but tasty. It reminded me somewhat of Lindt's Swiss Classic Double Milk chocolate, but with crunchy caramel. 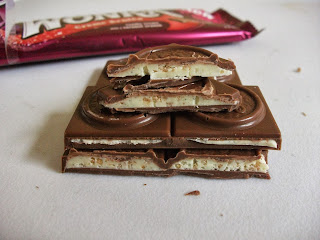 As tasty as it was, the chocolate became too sweet after just a few pieces. Whilst many people will enjoy this and its perfect for sharing, personally I prefer something a bit richer and less sweet! 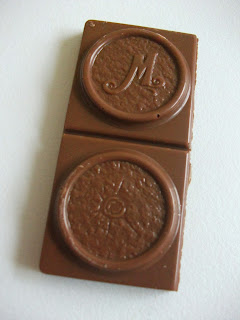 Overall, this is a tasty bar for sure and definitely the best of the three new Wonka bars, but I think it may be a bit too sweet for some.

I do think Nestlé UK missed a chance to bring out some truly interesting and innovative new chocolate varieties with this Wonka range. Cadbury have already been very successful with their Marvellous Creations bars so it's surprising Nestlé haven't taken the opportunity to do the same. I think it'll be interesting to see how these bars sell - I've heard many comments from people expressing disappointment with them, which surely isn't a good sign for longterm success.