Galaxy Gift For You White Chocolate with a Bubbly Centre Review 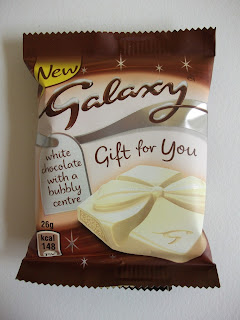 It was with a twinge of sadness that I witnessed the Christmas displays being erected in Tesco and Morrisons this week. It just feels so...wrong, like they're spoiling the spirit of Christmas. I know it's all about getting those sales in while they can, but does anyone really want to buy a tin of Quality Street in September?

Anyway, it still didn't stop me perusing all the new Christmas chocolates with great interest. Amongst the usual stuff I found this new white chocolate version of Galaxy Gift For You. It's different from the regular Galaxy "Gift For You Truffle", and instead of truffle contains a bubbly white chocolate centre. 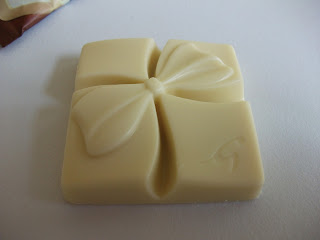 Opening the wrapper revealed a parcel-shaped piece of white chocolate, which I thought looked really nice. It contains 4 portions which can be broken off, so you can nibble on it throughout the day or save some for later...but I doubt anyone is going to do that! I cut a corner off to get a proper look at the bubbly centre: 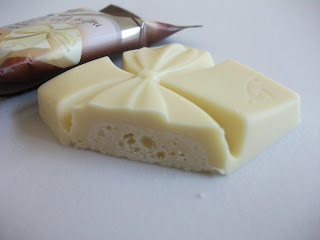 The chocolate smelled very creamy, moreso than a lot of white chocolates I've tried. Biting into a piece, I was met with a very full-on cream led flavour, and the chocolate melted in my mouth very easily thanks to the bubbles. It tasted super smooth, which is quite fitting for a Galaxy branded chocolate. 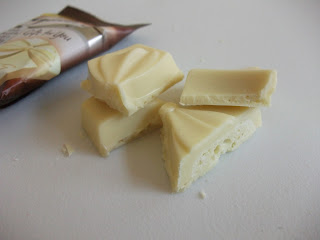 I wouldn't want to eat more than one of these at once since they're quite sweet, but as a small christmas snack they're very tasty. I imagine most people will buy them on the inevitable 2 for £1 offers alongside the original version anyway.

Overall, I think these are a nice addition to the Gift For You range and compliment the original Gift For You Truffle perfectly. As far as I'm aware this is the first time Galaxy have brought out a white chocolate product in the UK, so perhaps if it's successful we might see a white chocolate Galaxy bar in the future...?