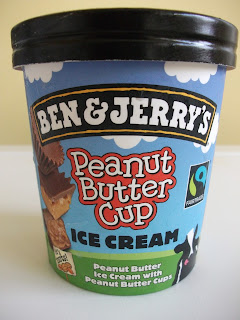 Way back in February, I reviewed Ben and Jerry's Core Peanut Butter Me Up. Although I enjoyed it, I remarked: "Personally I would like a tub of peanut butter cups and ice cream without the jam". It seems I wasn't alone in my thoughts - several of the commenters in that post seemed to agree with me. Infact, it seems that Ben and Jerry's UK have had a lot of people asking for a Peanut Butter ice cream. From the pack: "This wonderful flavour has made its way across the pond from our US creation station...and it's thanks to you! You've been asking us to bring peanut butter over here, so here you have it". Yay for people power! 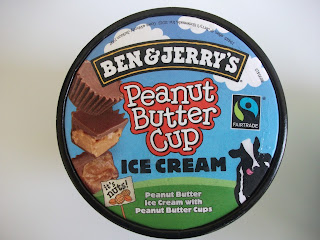 The description reads: "Peanut Butter Ice Cream with Chocolatey Peanut Butter Cups (20%)". That may seem like a low percentage of peanut butter cups, but they're actually very chunky in size, and there's a lot of them compared to the Peanut Butter Me Up. 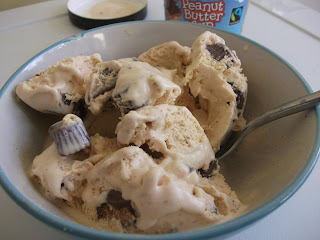 Scooping some into a bowl revealed a beige-coloured, speckled ice cream packed full of chopped-up peanut butter cups. The pieces were quite large, with the peanut butter centres clearly visible: 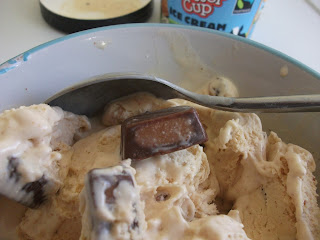 The ice cream tasted rich and peanutty, and of course very creamy. It had quite a savoury flavour with hints of salt as well as peanut. It took me a while to get used to as I've never eaten such a savoury tasting ice cream before! The peanut butter cups were very chocolatey, and gave regular bursts of sweet peanut butter goodness. They tasted amazing! 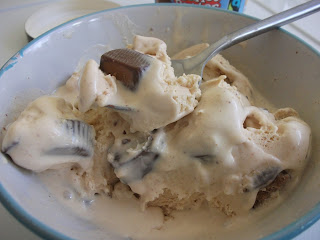 Overall, this is a delicious ice cream and it's great to see Ben and Jerry's listening to their customers and bringing us a flavour we really want. It's far better than Peanut Butter Me Up and gives a full-on peanut butter experience rather than distracting from it with jam. If you're a fan of peanut butter, you'll definitely want to check this out!

Price: £3 at Sainsbury's (will be available from other stores later in the year).
Suitable for vegetarians?: Doesn't state on packaging.
Allergy Information: Contains milk, nuts and soya. May contain gluten.
Nutrition Information (per 100g): 320 Calories, 25g Carbohydrates, 22g Fat.

If you've tried this ice cream yourself please let me know your thoughts in the comments!
Ben and Jerry's