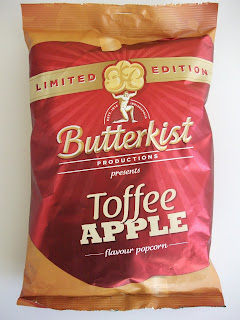 Well, this is a first - a new product on shelves that isn't Christmas-themed! Yes, Butterkist have bucked the trend and released a limited edition flavour more suited to the Autumn months instead - Toffee Apple!

I found this popcorn in B&M Bargains of all places, for 99p. It's described as "Popcorn coated with Apple flavour Toffee (65%)". There's a blurb on the pack that says "A taste that transports you to a land of ferris wheels, helter skelters and horse carousels". I don't know about anyone else, but I don't think of any of those when I think of toffee apples - I think of Bonfire Night and Halloween! 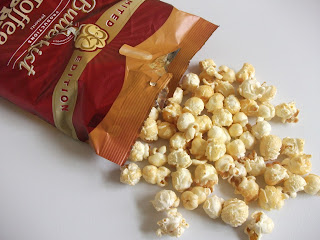 I was expecting the popcorn to have a buttery toffee taste, but instead was met with a strong, sweet apple flavour. Infact I couldn't really taste much toffee at all - the coating was just sweet and crunchy. The apple was most dominant, and in that respect I guess this popcorn replicates the flavour of toffee apple quite well, since real toffee apples contain a greater ratio of apple to toffee. 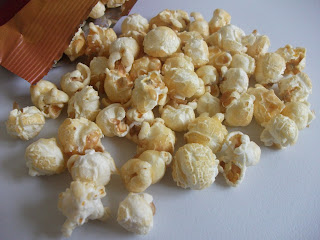 Overall, I thought this popcorn was okay but I would've preferred a stronger toffee flavour. It's nice to see a limited edition specifically for autumn though, so kudos to Butterkist for this attempt!

For an interesting read on the history of Toffee Apples (or Candy Apples as they're called in North America), check out the wikipedia page here.