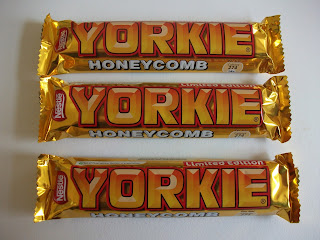 When I saw these Limited Edition Honeycomb Yorkie bars at 3 for a pound in a discount store recently I knew I couldn't say no. Even after reading The Snack Review's post saying how rubbish they were last year, the fact I might never get to try one again practically forced me to buy them. I can't let a limited edition chocolate bar come and go without me trying it! 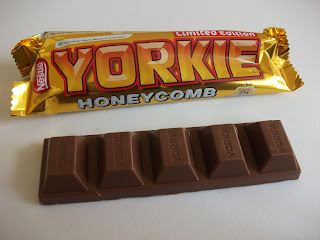 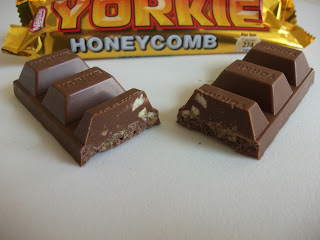 This bar was indeed as rubbish as Dave said in his review. Yorkie's aren't known for the quality of their chocolate these days anyway, but rather their chunky shaped blocks which are "not for girls" (or at least that's what the adverts used to say. I think Nestlé still have some making up to do for the generation of ladies they offended back then!). So it was up to the honeycomb to make this bar a worthwhile purchase, and it... didn't. The honeycomb pieces just tasted like crunchy bits of sugar, being very sweet but with no discernible honeycomb or butterscotch flavour whatsoever. The chocolate was very sweet and milky and pretty poor quality.

In contrast, the Galaxy Honeycomb Crisp I bought on the same day tasted smooth, creamy, luxurious and the honeycomb in it had a lovely butterscotch-led flavour. These two bars are on completely opposite ends of the chocolate spectrum for sure! 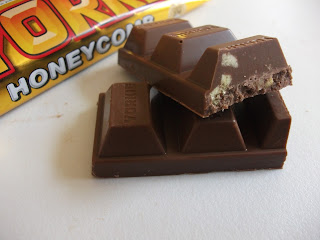 Overall, a very disappointing limited edition. Yorkie's used to be decent chocolate bars when I was a kid and had a distinctive taste all of their own, but now they've lost that and just taste boring. Their only selling point these days is the chunky-shaped blocks and even those are thinner than they used to be. It makes me wonder who still buys Yorkie's when there are so many better chocolate bars on the market.


Speaking of limited edition Yorkie's, Nestlé once did a mint Yorkie called "Blue Ice". It contained blue-coloured crunchy mint chips and was actually pretty tasty! Unfortunately back then Nestlé still used sexist advertising and the slogan was "Too cool for girls". Here's a pic from chocolatereview.co.uk: 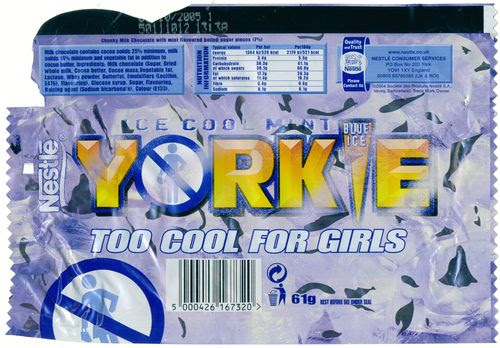 Were you a fan of the Yorkie Honeycomb Limited Edition? Do you remember Yorkie Blue Ice?  Do you even still buy Yorkie bars? Please let me know in the comments! :)
Nestlé Yorkie