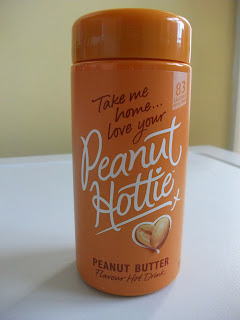 Many thanks to the makers of Peanut Hottie for sending me this jar of their new peanut butter-flavour hot drink to review!

Peanut Hottie is aiming to "make a storm in the nation's tea cups" with this drink, which is available exclusively from Sainsbury's. Apparently it's the first peanut butter hot drink on the market, which is surprising to me as I would've thought someone would have tried making one before now! Even more surprising is that it's made in the UK by a British company (not many of those left these days!) using American peanuts.

Peanut Hottie is also caffeine-free, suitable for vegetarians, contains no artificial additives or colours, and is under 100 calories per cup. Impressive stuff! 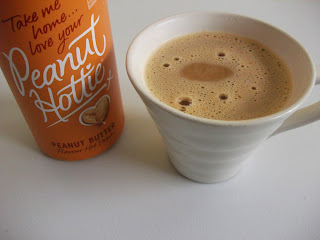 I made a cup as directed but added a little milk to make it creamier. This produced a brown, nutty-coloured drink with a slight froth on top as you can see in the pic above.

It tasted slightly salty and intensely nutty, but also surprisingly "light" and creamy. It's quite hard to describe the flavour, actually, because it was a differing mixture of savoury, salty, nutty, sweet and creamy. All the flavours worked really well together, in the same kind of way that Reese's Peanut Butter Cups do. It certainly captures the taste of peanut butter in hot drink form very well, although I was hoping it would be just a bit more intense. Perhaps adding a dollop of real peanut butter might add an extra kick...I shall have to experiment! (in the name of science, of course!)

Overall, this is a tasty and unique hot drink which I really enjoyed. It's the first of its kind that I'm aware of and I really hope it takes off! I'll certainly be buying this from now on as an alternative to regular hot chocolate.

*I was kindly sent this product for an honest review and all opinions expressed are my own.
Peanut Hottie Sainsbury's