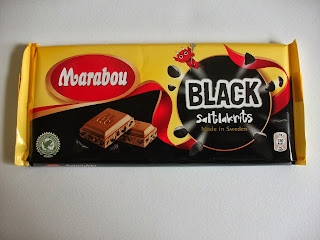 Call me crazy, but when I saw this bar of Licorice chocolate on ebay recently I just had to give it a try. It sounded so odd, crazy and weird but also....potentially nice? That's what I was hoping anyway!

Marabou is a famous Swedish chocolate brand that was founded by a Norwegian chocolatier in 1968, and is now owned by Kraft Foods. The bars were available from Ikea up until 2011 in the UK, which is an unfortunate loss because they're very tasty chocolates. 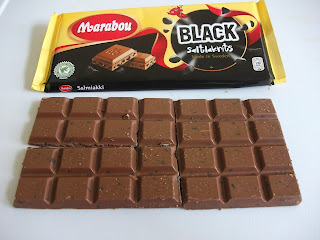 This particular bar contains milk chocolate (30% cocoa solids) with chips of salty licorice, or "saltlakrits" embedded within. I'm a fan of regular sweet licorice so naievely thought this might taste similar, however I didn't realize just how different salty licorice would be! 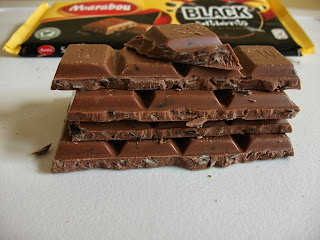 The licorice chips were very salty and pungent, so much so that I initially felt like spitting the chocolate in the bin! After a while though I got used to the taste and started to find it rather moreish, despite the pungency. The milk chocolate was very good quality, with a smooth melt and good cocoa flavour. It tasted far better than a lot of mainstream chocolates we get here in the UK. 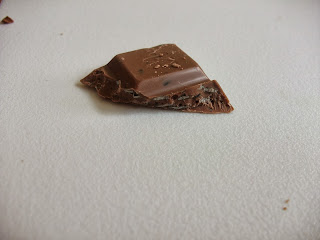 Overall, I think I made a mistake in choosing this Saltlakrits bar as my first introduction to Marabou. The chocolate is clearly good quality for a mainstream brand and combined with different ingredients is really tasty. As it stands though, this is a "marmite" bar - if you like salty licorice you'll probably love it, but if not...I would avoid!

Since sampling this bar I've found more Marabou chocolates in discount stores which include a fruit and nut and hazelnut variety. I'll be reviewing them shortly - they're delicious and well worth looking out for!

Price: Varies - I bought this bar on ebay.