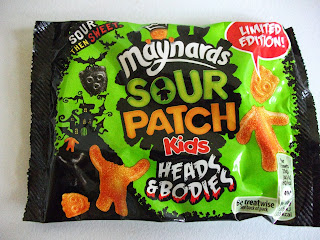 I found these rather ghoulish new limited edition Sour Patch sweets in a local department store recently. They're new territory for the Maynards brand, which have long been associated with Wine Gums and Midget Gems in the UK. They're a variation on regular Sour Patch Kids (which I'm quite a fan of - see my review of Sour Patch Kids Soda Popz here) and contain only orange and blackcurrant flavour gums in head and body shapes. There was a bit of a mismatch between the numbers of each, though, and I ended up with more heads than bodies! 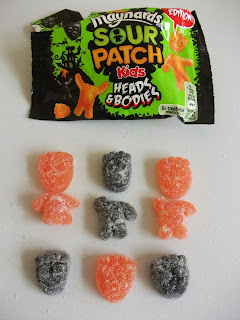 Taste-wise they were very nice - intensely sour but gradually becoming sweeter. I initially thought the combination of orange and blackcurrant was a rather odd choice as they don't strike me as flavours that go together, but in practice they complimented each other surprisingly well. The blacckurrant flavour reminded me of Maynards blackcurrant Wine Gums, which was a nice nostalgia trip as I haven't eaten Wine Gums in years.

Overall, these are tasty sweets which are a nice bit of fun for Halloween, although I do think the concept of severed head sweets is a bit disturbing for young kids!