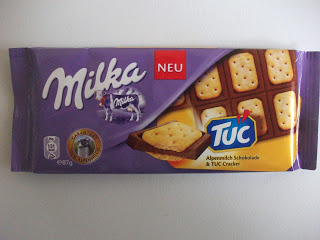 A big thankyou to Monster Sweets who sent me these Milka bars to review recently after reading of my disappointment with the Milka Lila Pause. Apparently it's common for a lot of imported Milka bars to be poor quality, and it's best to stick with German stock. Luckily, Monster Sweets sell a lot of German Milka bars for a good price and cheap postage. They also sell Ritter Sport's range, including the new seasonal flavours, as well as many American imports like strawberry and grape Fanta. I highly recommend their site: http://www.monstersweets.co.uk/ 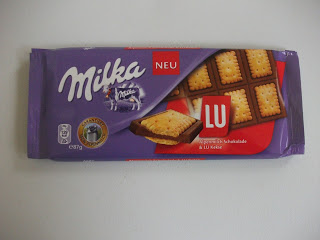 I've been curious about these Milka bars for a while now, they sounded a bit weird but potentially amazing.

Milka with TUC crackers:
This had to be perhaps the weirdest bar of the two, as it contains salty TUC crackers. The crackers are stuck to the chocolate on both sides of the bar, but many of them had fallen off, which looks like it might be a common problem. Luckily some had stayed on so I managed to munch them with the chocolate. And what a delicious combination it was! The crackers were crunchy and salty and somehow just worked when combined with the creamy Milka chocolate. It was a nice contrast and very, very moreish.

Milka with LU kekse (biscuits):
I have never heard of LU before so I wasn't sure what to expect, but apparently they're a French biscuit brand and the biscuits used in this bar are like sweet butter biscuits. Unlike the Milka with TUC they were firmly stuck to the chocolate, and seemed to have some sort of sugar syrup binding them to it. Taste-wise they were as delicious as the TUC, but sweet and with a hint of vanilla flavour. Combined with the creamy Milka chocolate they make for a delicious bar which is very addictive.

Overall
I can't recommend these Milka bars enough; I think they're a brilliant idea and both are delicious, addictive combinations. I would say I enjoyed the TUC version more because the combination of savoury crackers with creamy chocolate is very moreish, although the LU version is pretty tasty too. I hope Kraft/Monadalez bring them to the UK, but suspect they wouldn't trust our British palates to handle them...

Have you tried these Milka bars before? If so what did you think of them?
Milka Monster Sweets