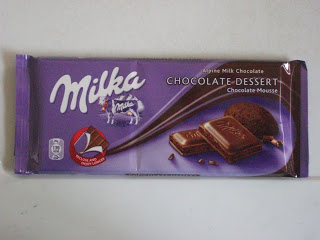 If I were to sum up this Milka Chocolate Dessert in one word, it would be AWFUL. But that's too easy, and maybe a little unfair. I'm sure it's not normally so horrible, but the one I tried was. It was a little past it's best before date (by less than a month), but I still don't think that's an excuse for how bad it tasted.

When I bought this for 40p (from a discount store, naturally) the lady at the till informed me I could get three for a pound, which I politely declined. I knew why she was trying to get rid of them... because they were obviously rubbish! Still, being the snacks hunter I am I had to give one a try for reviewing purposes. The things I put myself through...

This was described as "Milk chocolate with alpine milk and whipped cocoa filling". I was expecting it to be a simple cheap truffle type filling, but it was much worse than that. The vegetable fat must have gone rancid or something, because the taste was just awful. I can't really describe it properly... it was kind of dry, musty and just tasted "off". The milk chocolate coating didn't really help matters, since there was more filling than chocolate. 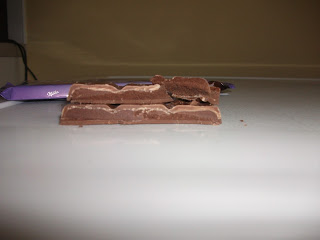 I imagine this would be a lot nicer if it were in date, but I can't say for sure so if you've tried this bar yourself please leave a comment and let me know your thoughts, otherwise I shall have to assume it's one to avoid in future!
Milka