Vanilla Coca Cola is back! (UK) 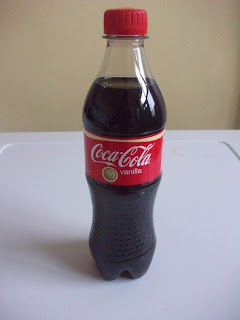 I was a big fan of vanilla coke when it was launched in the early '00s, and when it was axed I thought it was gone for good. It's not the sort of flavour you would really expect to be popular - citrus or cherry seem to be more commonly paired with cola - so I wasn't expecting a return any time soon.

Thankfully I was wrong, because it's now back on shelves after a 6 year absence! According to Coca Cola UK there's been a big demand from consumers to bring it back, and they have listened.

I've been searching for this ever since I read about it, and actually passed it by a couple of times in Tesco because it looked almost identical to the regular bottles of Coca Cola there. There isn't really much to distinguish it apart from a beige streak and swirly symbol on the label, and I had to look closely to notice the word vanilla.

Taste-wise it wasn't quite as good as I remember. It tasted sweet with just the faintest hint of vanilla giving it a smoother, more rounded taste than regular Coca Cola, but it didn't taste all that different to be honest.

Overall, it's great to see Vanilla Coke make a return, but I think it should have a more pronounced vanilla flavour. Maybe I'm just looking at the past with rose-tinted glasses, but I remember it being much nicer. I'm pretty sure there also used to be a diet version, which may be the one I'm remembering. If anyone else remembers it please do leave a comment!

Were you a fan of Vanilla Coke when it was launched, or are you completely new to it? Are you glad it's back? Please let me know your thoughts in the comments!
Coca Cola