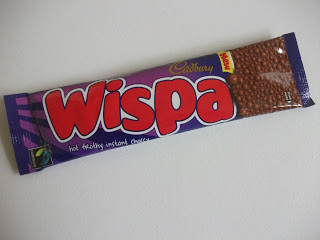 After hearing about the new Wispa hot chocolate via Twitter I knew it was something I had to seek out; I'm a sucker for products like this! Rumour had it that Tesco was the first to stock it so I made it my mission to go there and track some down.

Thankfully this Wispa hot chocolate did; it had that unmistakable signature Cadbury chocolate taste and was very creamy and frothy. I stirred it well to "release the bubbles", as instructed on the pack, and the froth did actually resemble the centre of a Wispa bar, as you can hopefully see in this pic (and yes, that is a chicken you can see on the side of the cup!) : 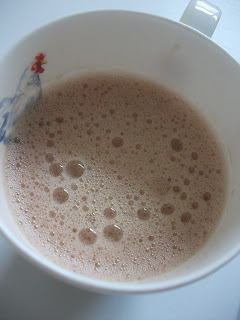 Next time I think I will buy the larger jar version (reviewed here by Grocery Gems), and use a few extra teaspoons of powder because the small sachet wasn't quite enough for my large cup.

Overall, a tasty, bubbly instant hot chocolate from Cadbury. I hope they bring out a Wispa Gold version too! (Or Mint..)

Writing this has reminded me of a product Cadbury brought out years ago...it consisted of a sachet of hot chocolate with a portion of Crunchie nuggets, which you dropped into the hot chocolate. They were very tasty. I haven't seen them on shelves for a while now, can anyone remember what they were called?

Price: 36p per sachet or £2.79 for a jar at Tesco.
Nutritional facts: Contains milk and soya.
Cadbury