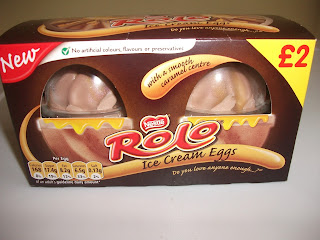 Whilst in Waitrose recently I came across these Rolo Ice Cream Eggs, alongside some Smarties Ice Cream Eggs. I'd read about them a while ago in this press release, and thought they might be a genuine product first, since ice cream Easter eggs have never really been done before.

Unfortunately though, they're not - they're just pots of ice cream with lids on. So much for "ice cream easter eggs" then!

To me, the pots look like some kind of weird space pod rather than an egg. What do you think?

I chose the Rolo "Eggs" because they sounded a bit more luxurious than the Smarties variety. The blurb on the pack reads: "Rolo ice cream eggs contain chocolate ice cream, with a smooth caramel yolk, decorated with caramel sauce and milk chocolate pieces".
In contrast the Smarties versions contain vanilla ice cream, a fondant "yolk" and mini Smarties on top.

I had to laugh at them describing the centres as "yolks". Combined with the weird space-capsule-egg container, it's quite funny how much they want you to suspend disbelief over what these really are (ie. pots of ice cream with lids on!)

Whilst they may look appetizing in the pics, disappointingly they didn't taste as good as they looked. The caramel was nice enough, but the chocolate ice cream didn't taste very chocolatey at all and the chocolate pieces tasted rather cheap.
They cost £2 for 2 eggs, so I guess they were never meant to be a luxury offering. I think buying them from Waitrose must have given me the subconscious expectation they would be great quality!

Overall, these were nothing special and there are much better ice cream options out there, so I wouldn't recommend them. However, if you like novelty products you might get some enjoyment from them. I think kids would also like them.

I might give the Smarties version a try next, although I'm not expecting much!

Price: £2 at Waitrose
Nutritional facts: Contains milk and is suitable for vegetarians.

Have you tried these Ice Cream Eggs? If so, what did you think?
Nestlé Rolo