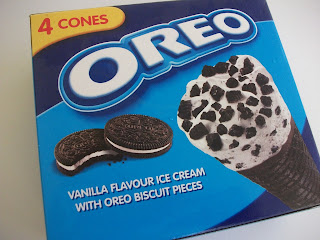 Whilst in Sainsbury's looking for the Ben and Jerry's Clever Cookies recently, I also spotted this box of Oreo Ice Cream Cones. Described as "Crisp chocolate flavour wafer cone with vanilla flavour ice cream with crushed chocolate flavour biscuits", you get 4 cones for £2.49.

Apparently Oreo cones are available in the US, but it appears they're simply plain unfilled chocolate flavour cones. I can't find much info online, so if anyone knows otherwise please do leave a comment! 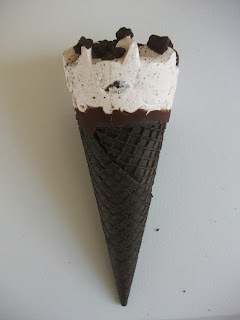 These were filled with plenty of vanilla ice cream and Oreo pieces. The ice cream had a lovely creamy vanilla flavour, and was quite light and not as dense as some ice creams. The Oreo pieces added a tasty chocolate crunch, although were missing the cream element you get in traditional Oreos. I guess the ice cream is meant to take its place. The wafer cone was very crunchy and chocolatey, and combined with the ice cream it made for a great taste experience. It was a nice contrast of creamy and chocolatey, soft and crunchy, and very, very moreish! I don't think I've ever seen chocolate-flavoured cones like these before, so they may well be a first, at least here in the UK anyway. 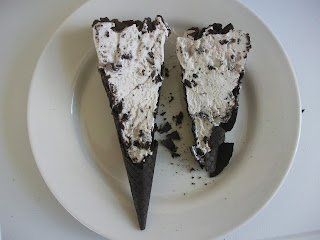 Something that wasn't mentioned on the box was the fact that there's a small portion of chocolate compound (ie. fake chocolate) at the bottom of the cones, which you can hopefully see in this pic: 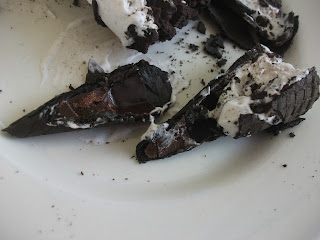 I don't usually like compound chocolate, but in this case it was a nice extra hit of chocolate flavour and a good way to finish off the cone.

Overall, I think these Oreo Ice Cream Cones are a great idea and very tasty. They combine cocoa flavours, crunchy wafer and creamy vanilla ice cream very well. If you like Oreos I would recommend them!