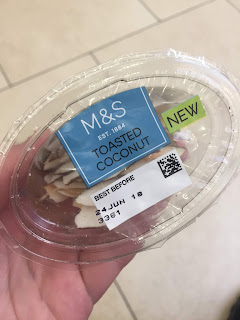 Today's review is somewhat more healthy than usual, since I've been on a bit of a health kick again recently. I'm a fan of toasted coconut chips to help  stay away from chocolate bars, however my major gripe is usually the price - they almost always cost a lot for a small amount! That was no exception with this new variety from M&S, which costs £1.20 for a little pot. Still I thought I'd give it a try to see how it compares to the likes of Ape Coconut Curls and Urban Fruit Coconut Chips. 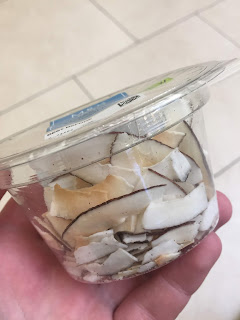 Unlike most toasted coconut chips these ones still have some of the shell on them, which may be a good thing or not depending on you. I suppose if you're looking for extra fibre it's a plus, but it certainly doesn't make them tastier. 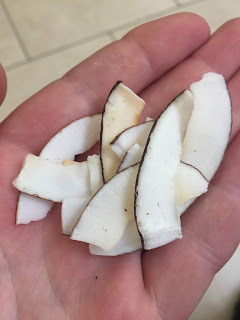 They were a bit tasteless to be honest. They were very fresh, I'll give them that, but there was no real toasty flavour. It's almost like they were too scared to toast them too much so they ended up somewhere in between regular bland coconut chips and slightly toasted.

Overall, these are handy if you need a quick, sugar free low carb snack but otherwise, I wouldn't bother with them. Look out for better options such as Holland and Barrett Crisp Coconut, Ape Coconut Curls, or Urban Fruit Coconut Chips if you're eating sugar.