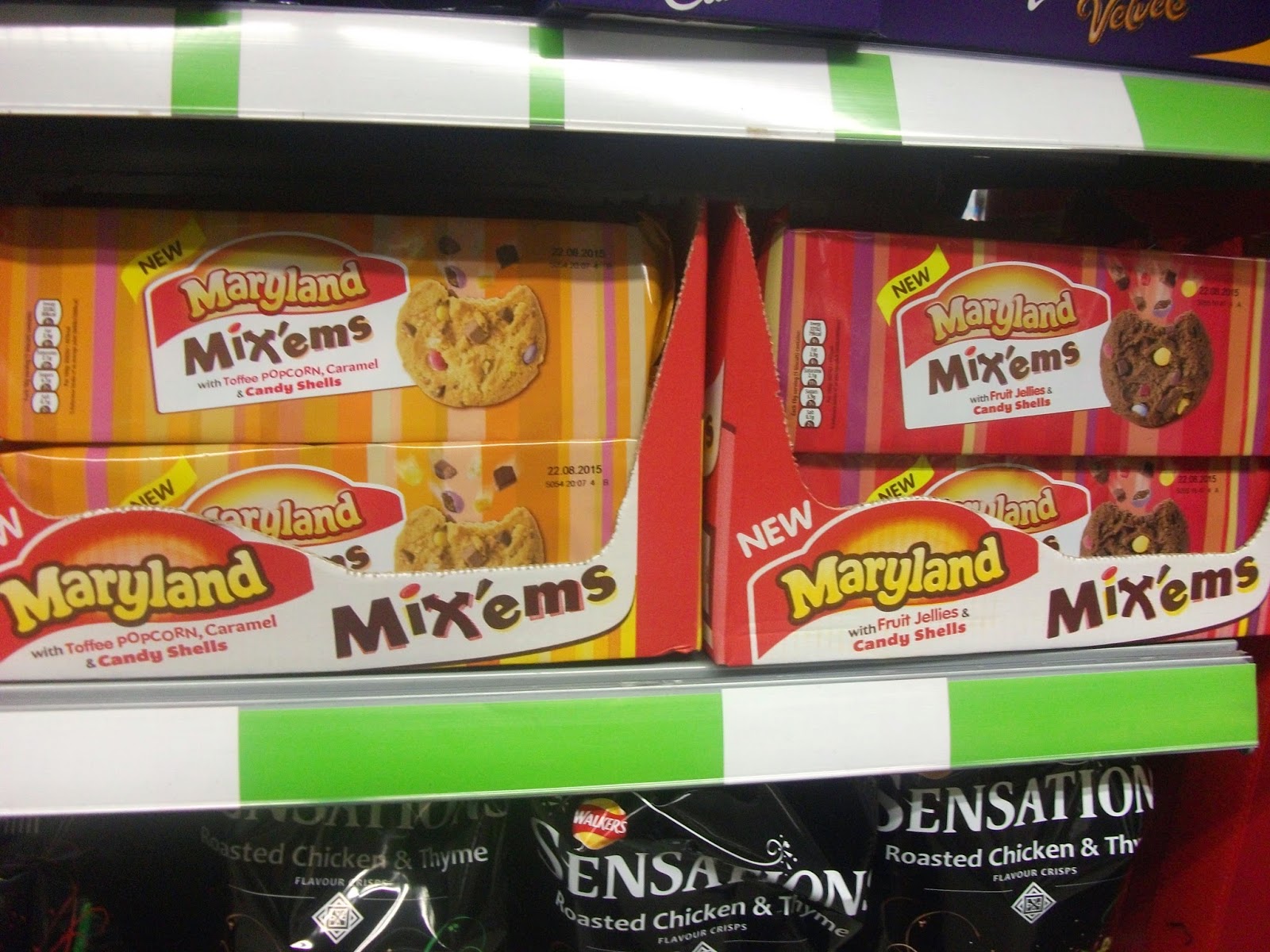 Maryland Mix'Ems: An obvious and almost direct copy of the UK Chips Ahoy! cookies, these come in two varieties, one which includes popcorn and candy shells, and one which contains fruit jellies and candy shells. Considering Chips Ahoy! don't seem to have taken off in the UK (they're currently found in all good discount stores for £1!) this might be a canny move from Maryland. Spotted in The CO-OP. 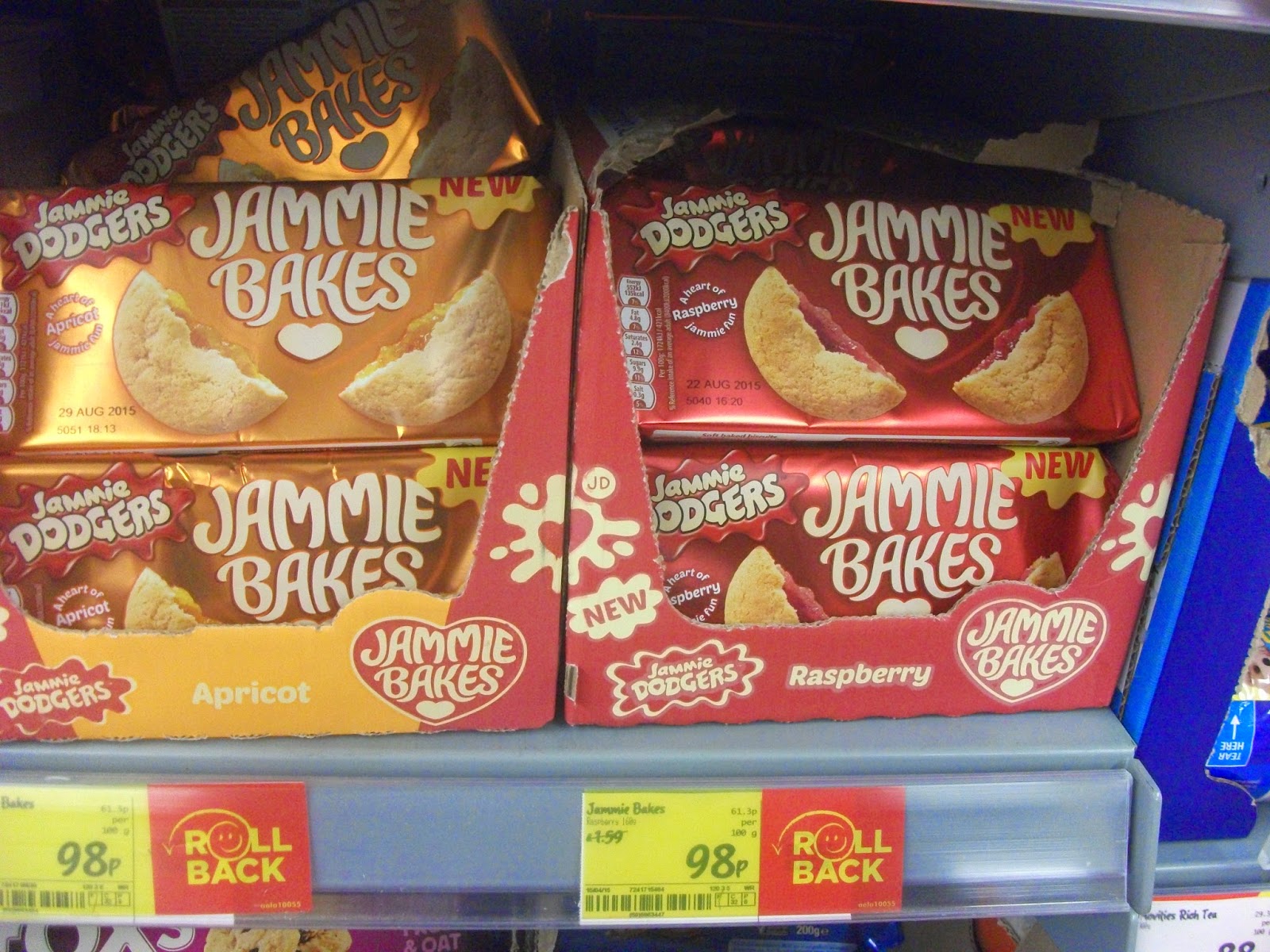 Jammie Dodgers Jammie Bakes:
Burton's have also brought out this new range of Jammie Dodgers "Jammie Bakes", which contain fruit fillings inside a biscuit coating. The idea is similar to Maryland Gooeys, but these are apparently aimed at a more mature audience. Spotted in Asda. 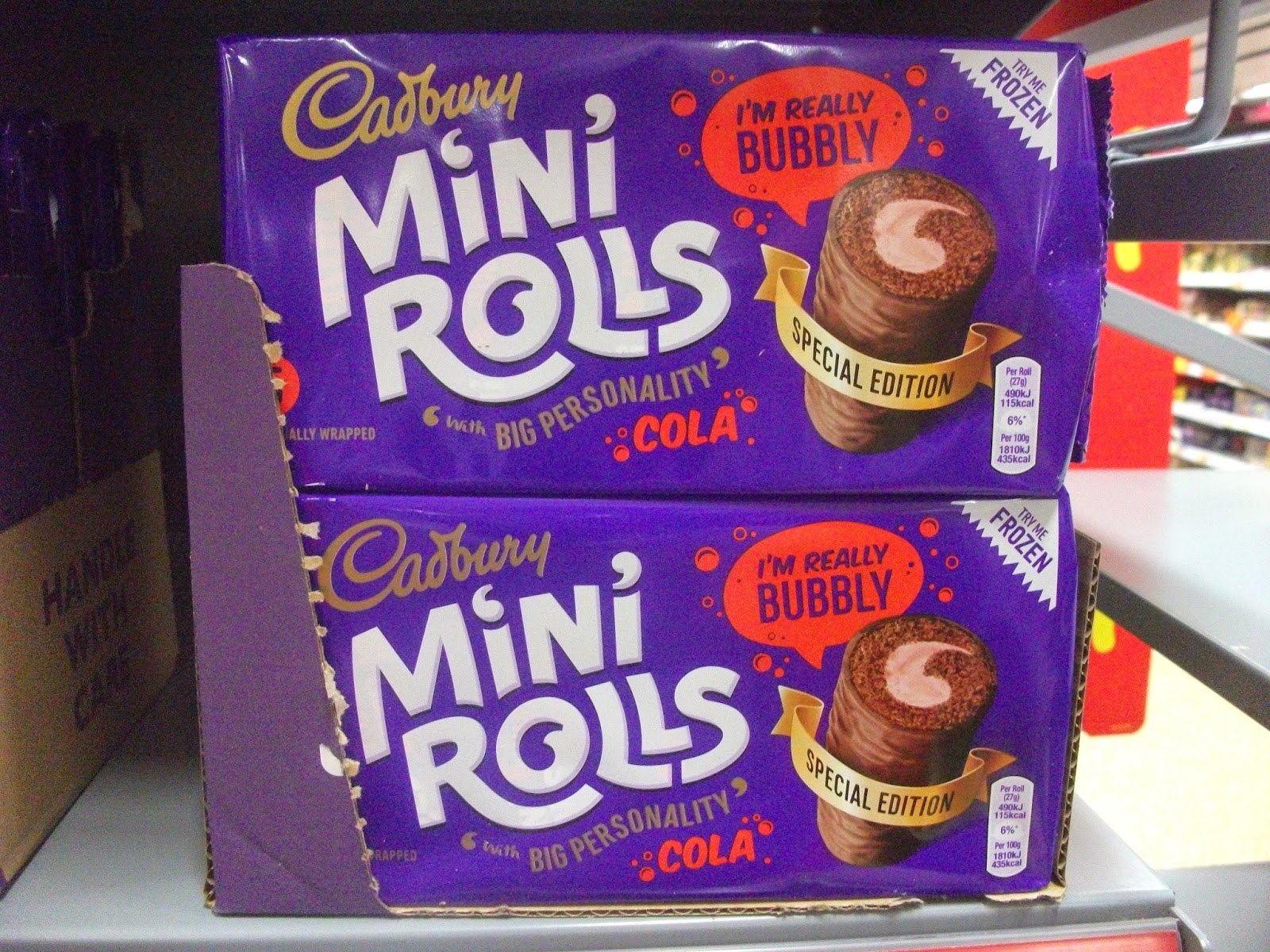 Cadbury Mini Rolls Cola Special Edition:
Cadbury have been tinkering with weird flavours again and have brought out these cola flavoured MIni Rolls as a limited edition. If you've tried these let me know in the comments! I don't fancy them much myself...Spotted in Asda. 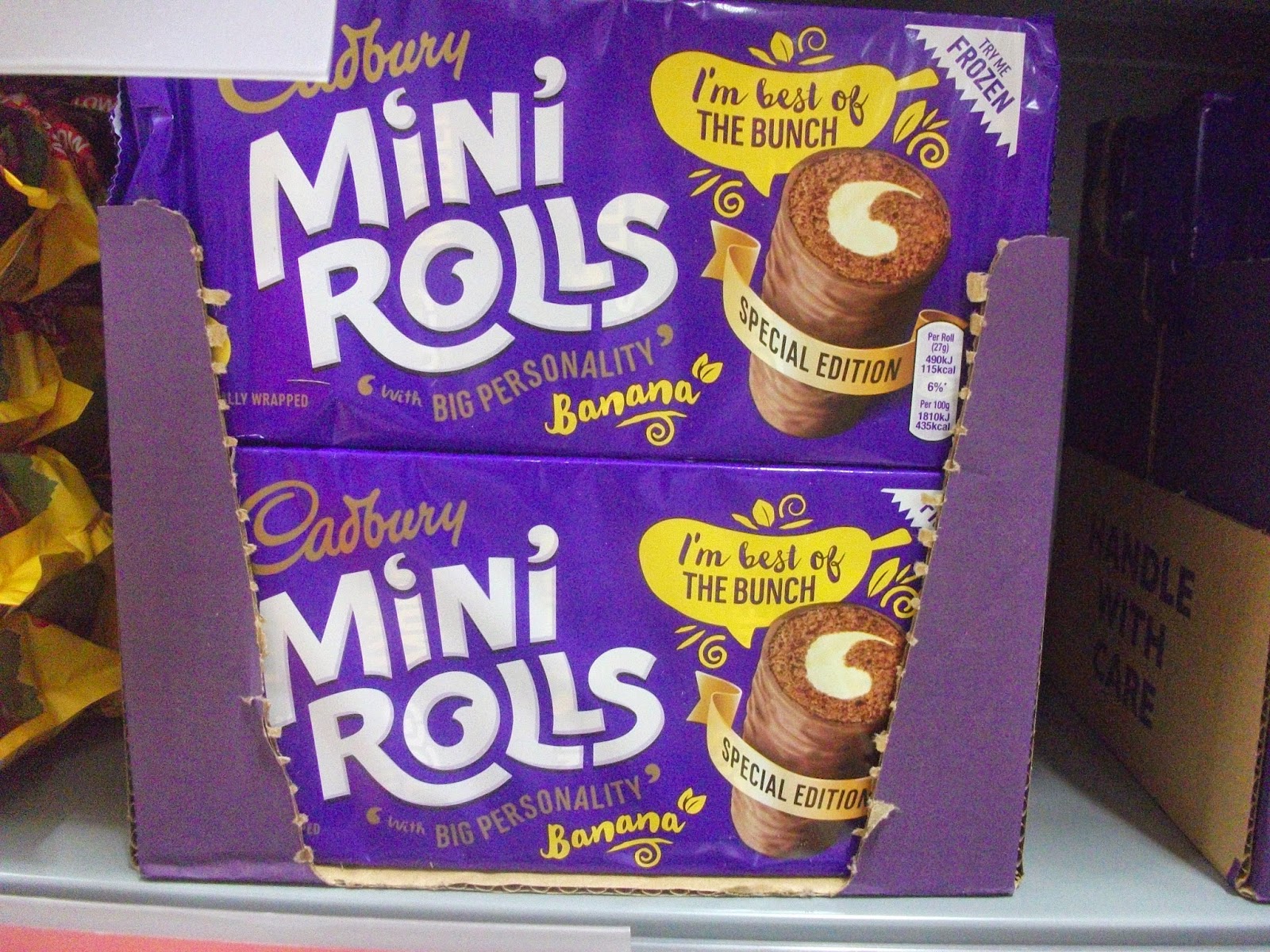 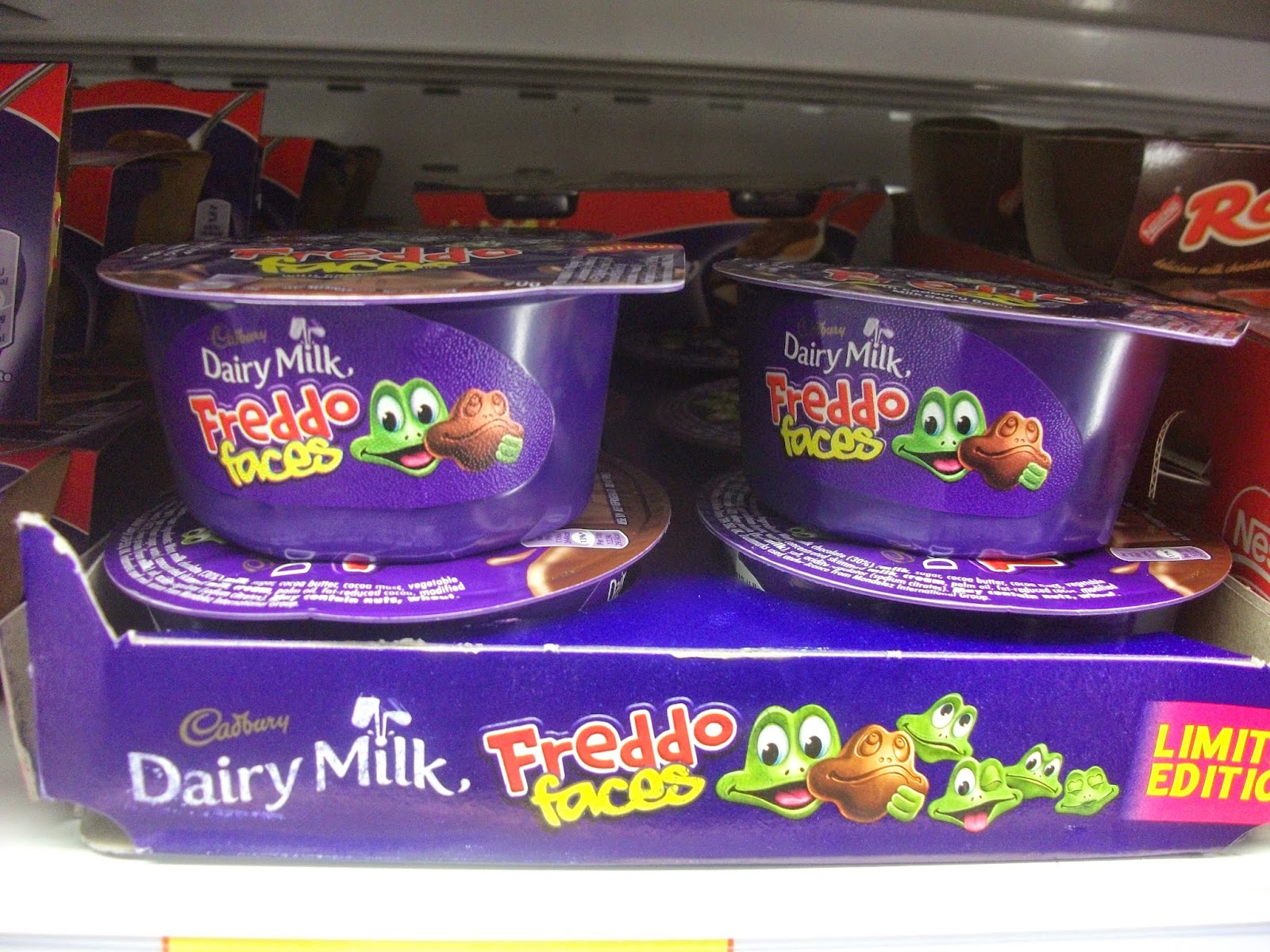 Limited Edition Cadbury Dairy Milk Freddo Faces Desserts:
Mondelez have recently introduced two new desserts to their range; Freddo Faces and Cadbury Animals. I think they're a lazy idea to be honest - it can't be that hard to mix existing chocolates with plain chocolate dessert! Spotted in Tesco Express. 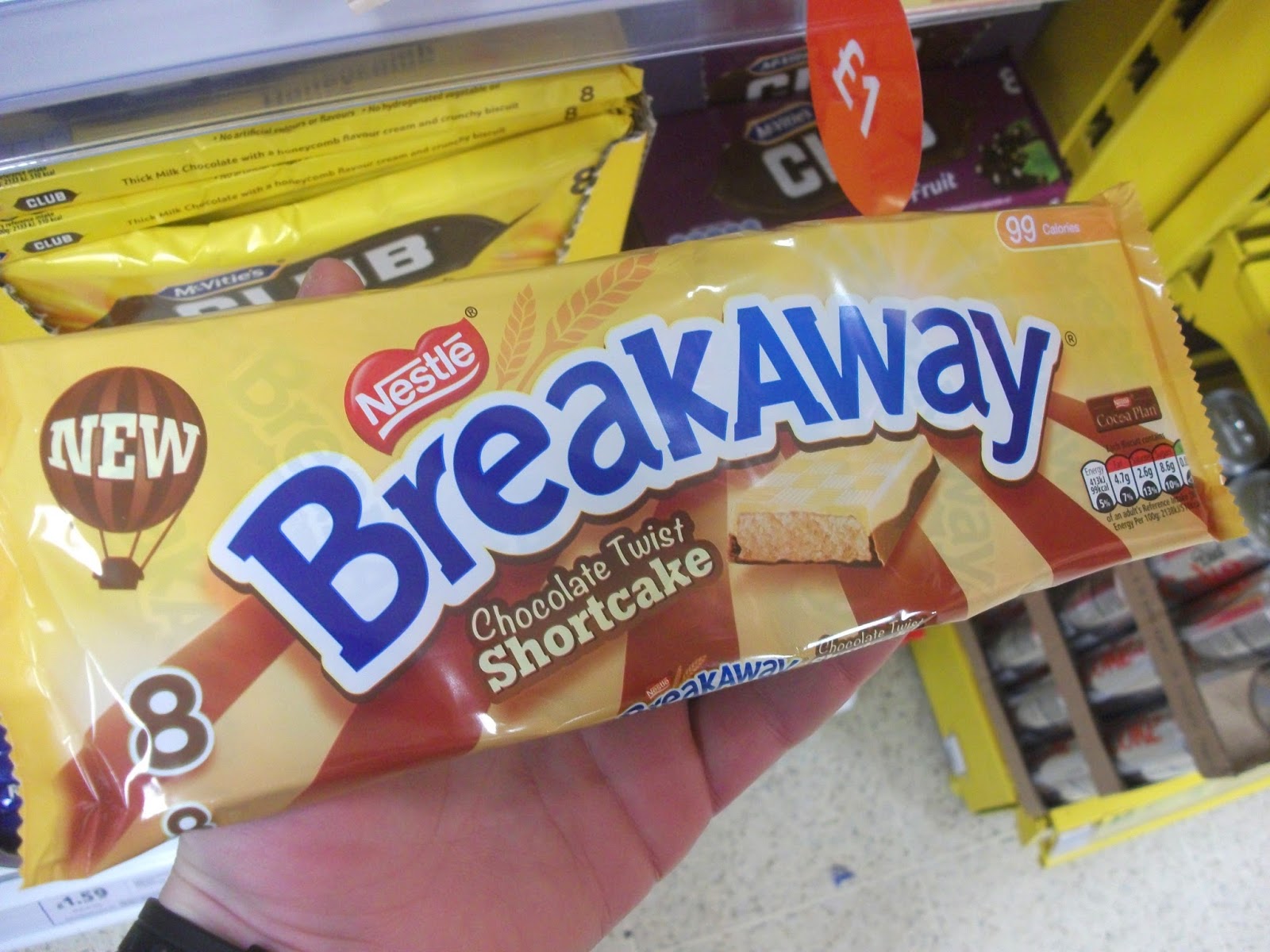 Nestlé Breakaway Chocolate Twist Shortcake:
Nestlé have added a few new flavours to their Breakaway range in recent years, including orange and double chocolate, and the latest to join them is this "chocolate twist shortcake", which is basically a shortcake half-coated in milk chocolate and half-coated in white chocolate. Spotted in Tesco. 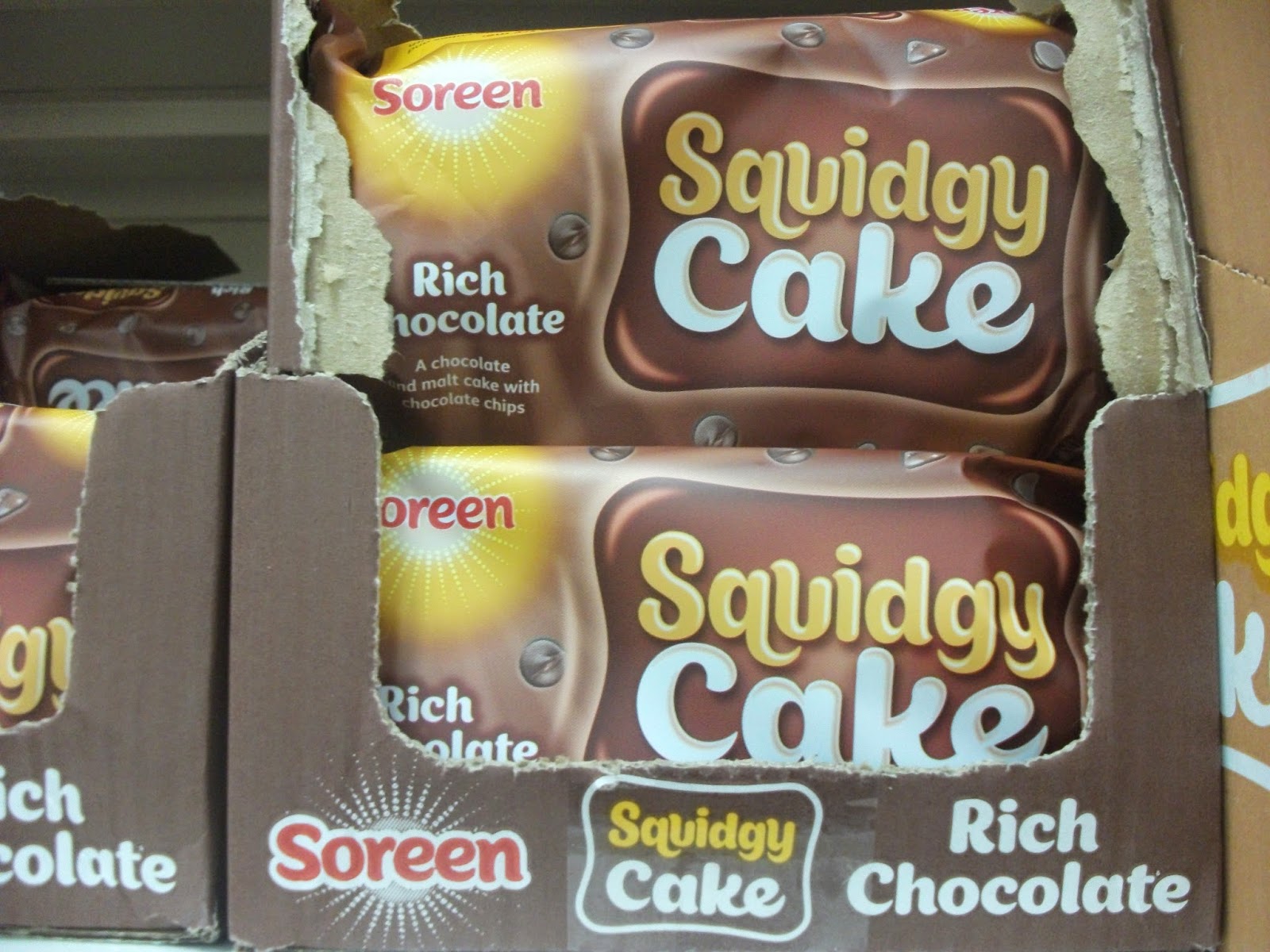 Soreen Squidgy Cake Rich Chocolate:
I'm not sure if this new chocolate flavour Soreen "squidgy cake" is the same as the chocolate Soreen they've done before, or of it's a totally new product. If anyone has tried these let me know in the comments! Spotted in Tesco. 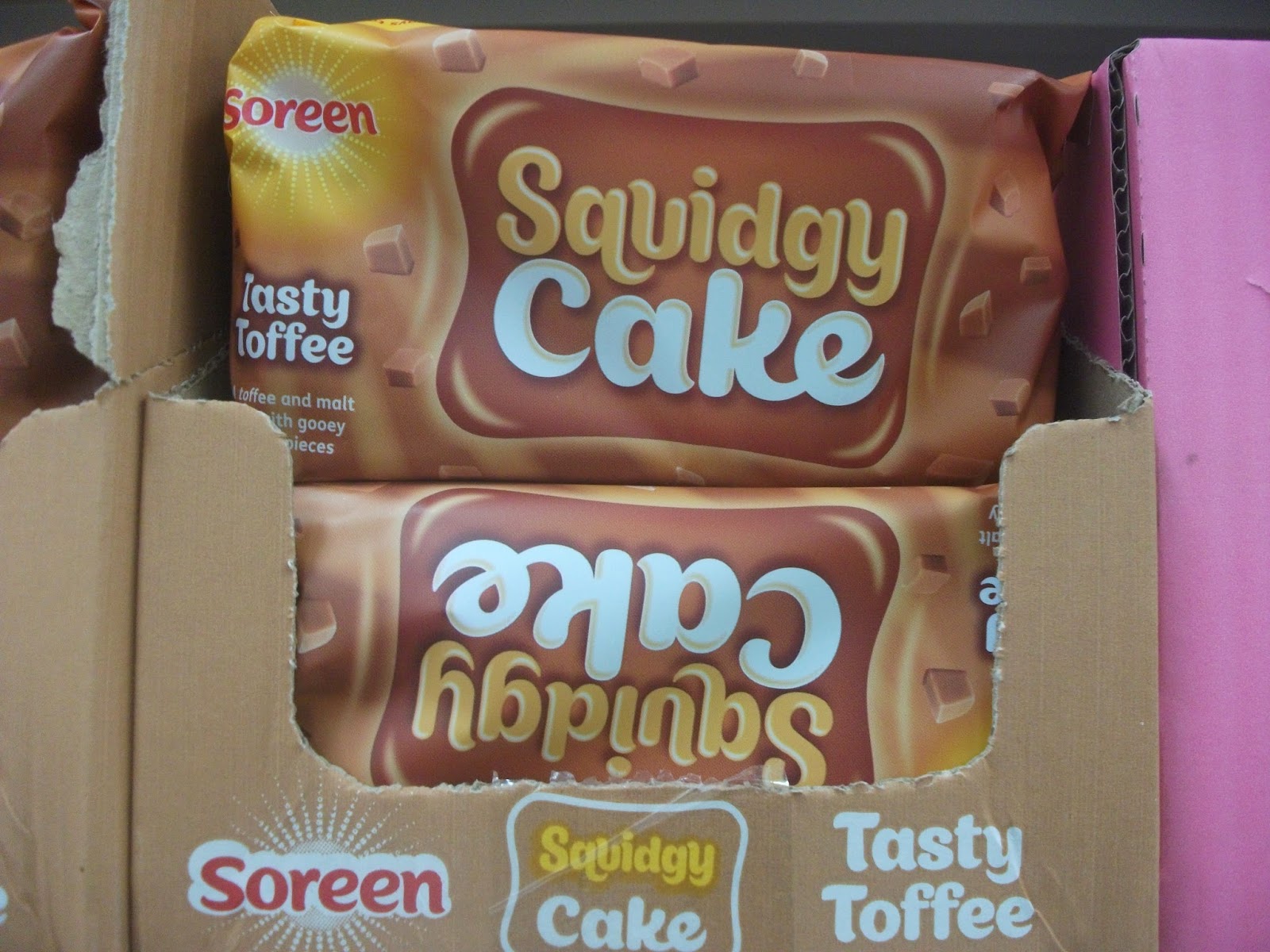 Soreen Squidgy Cake Tasty Toffee:
I'm not sure of Soreen have done a toffee variety before? 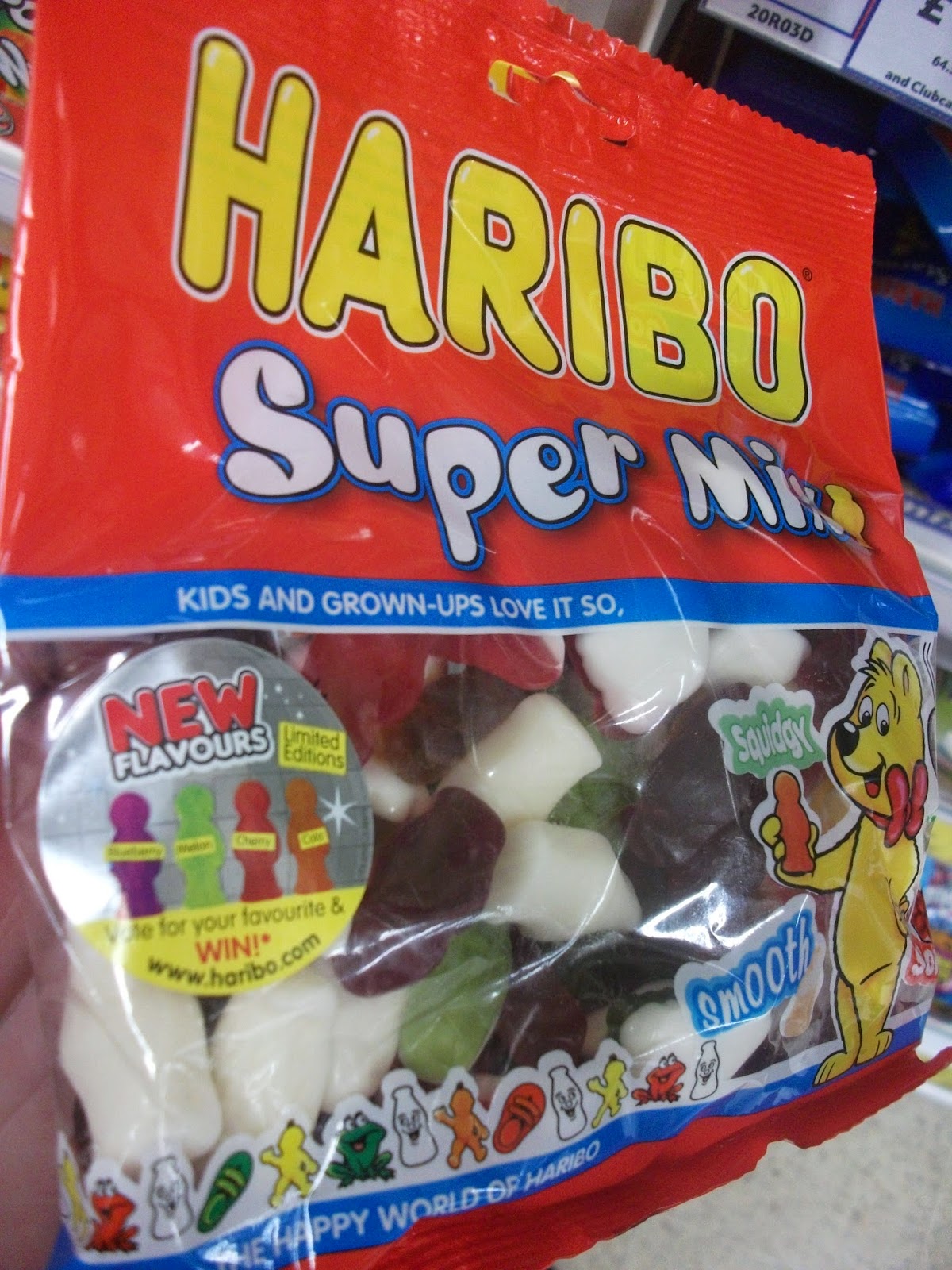 Haribo Super Mix - New flavours!:
Haribo have added 4 new flavours to their Super Mix sweets, and I think you have to vote for the one you like most. Spotted in Sainsbury's. M&M's "Vote for me!" promotion:
M&M's are also doing a promotion to vote for your favourite M&M colour. I think they include red, blue and brown although I'm not entirely sure. To be honest I just wish Mars would bring flavoured M&M's to the UK! 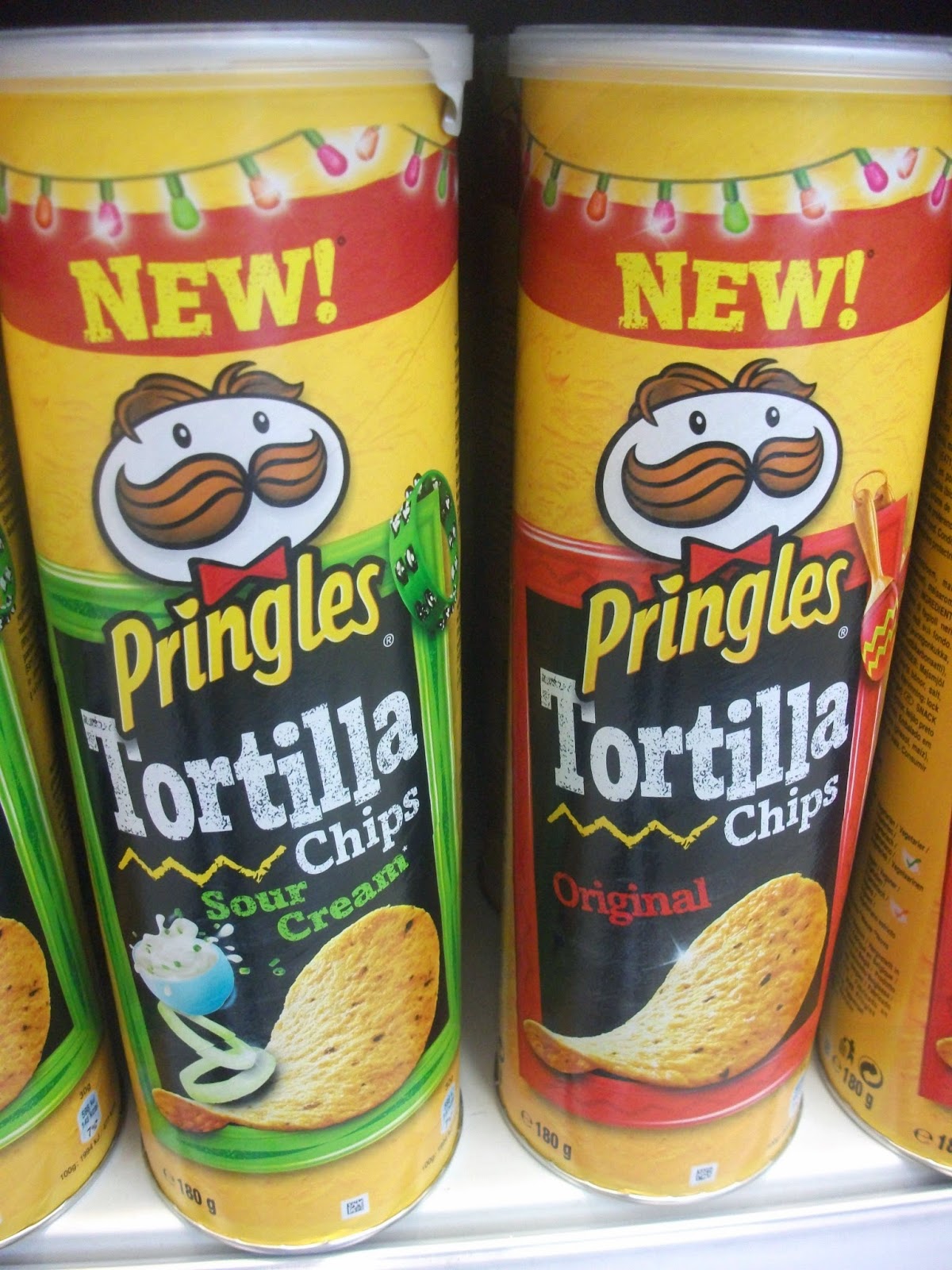 New Pringles Tortilla Chips:
For a review of these see Grocery Gems. I can't quite imagine eating tortillas from a tube to be honest! Spotted in Tesco Express. 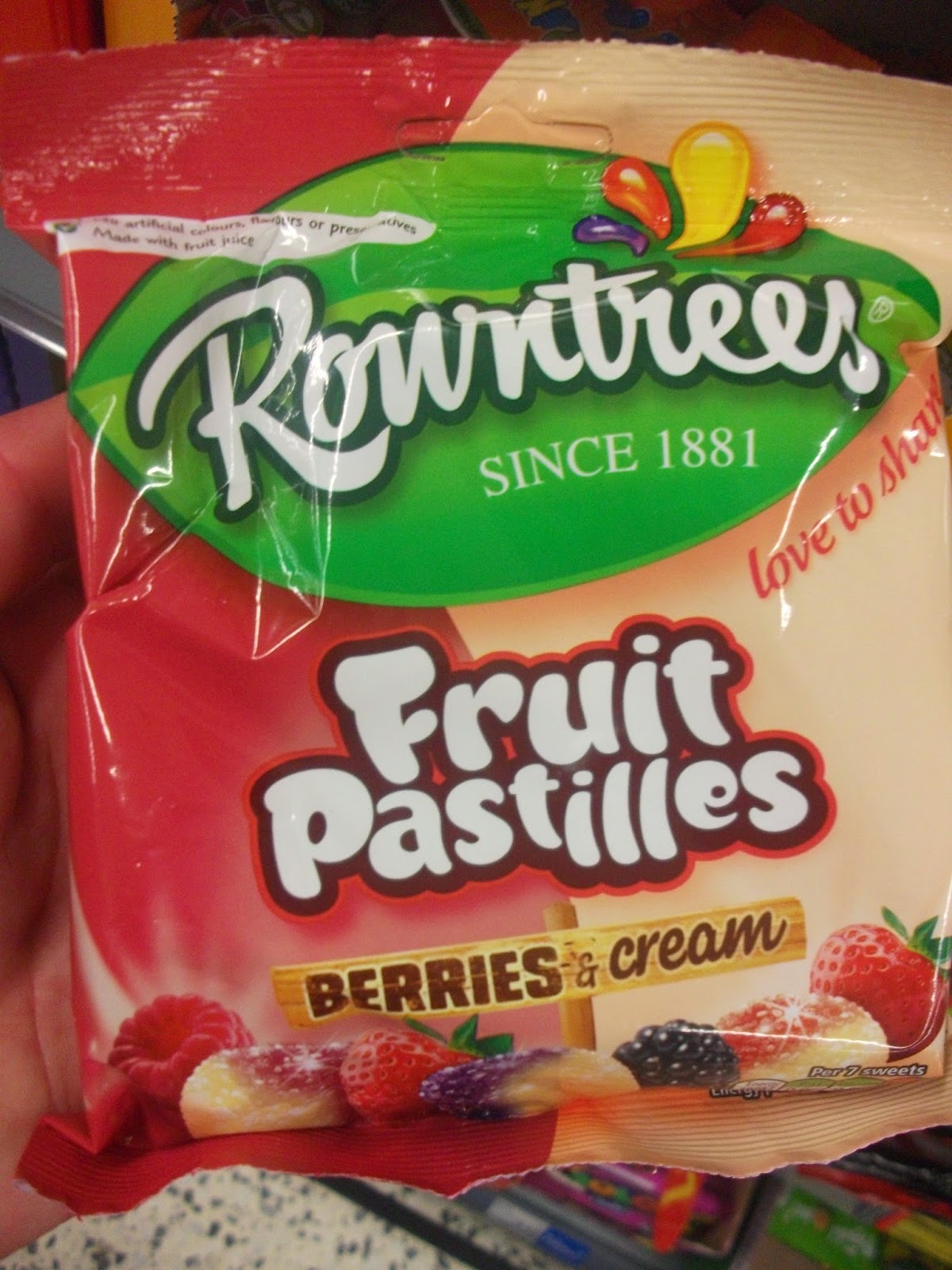 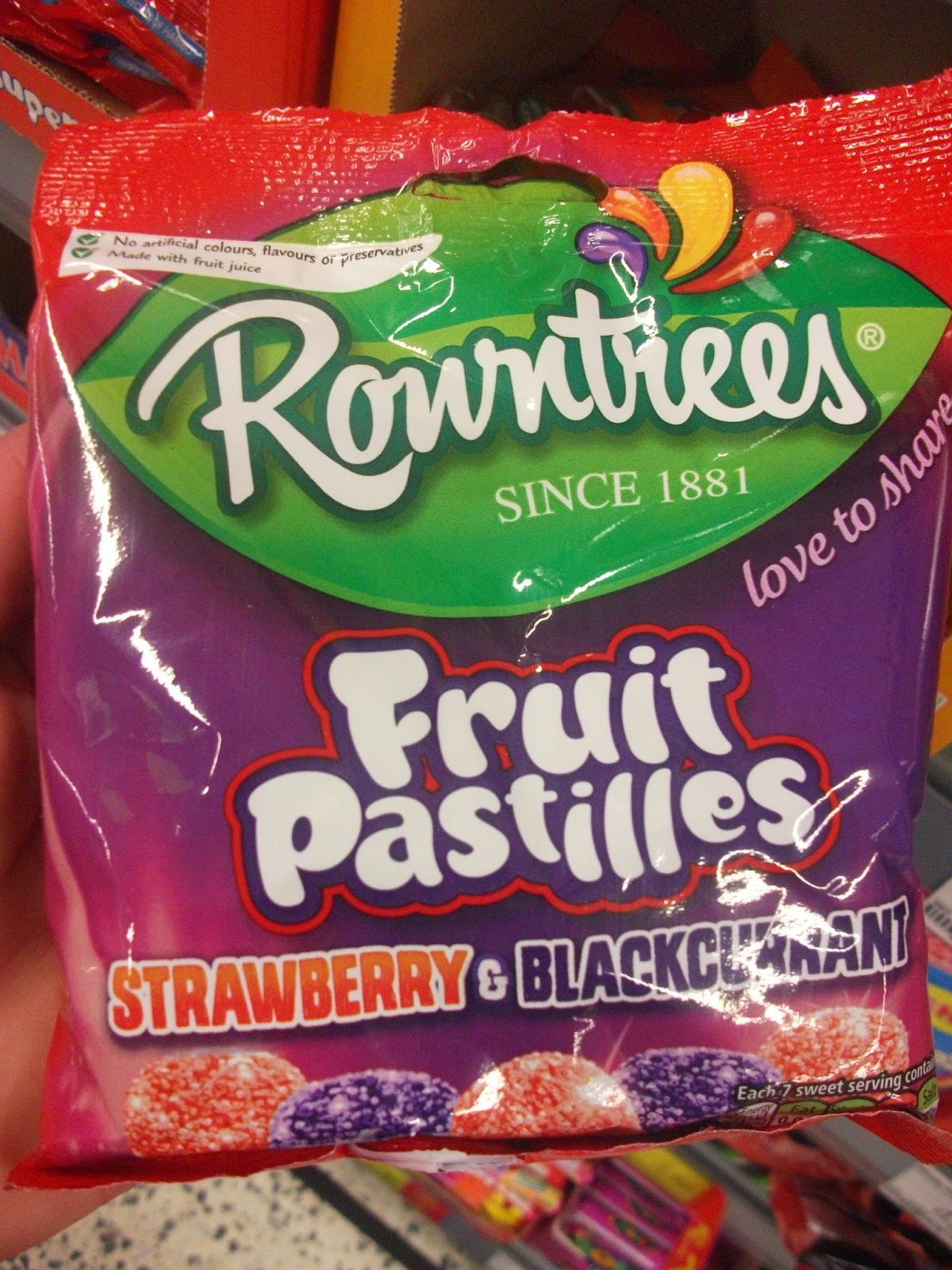 Fruit Pastilles Strawberry & Blackcurrant:
Although they have just put strawberry pastilles and blackcurrant pastilles in this bag. Very lazy! Spotted in Asda. 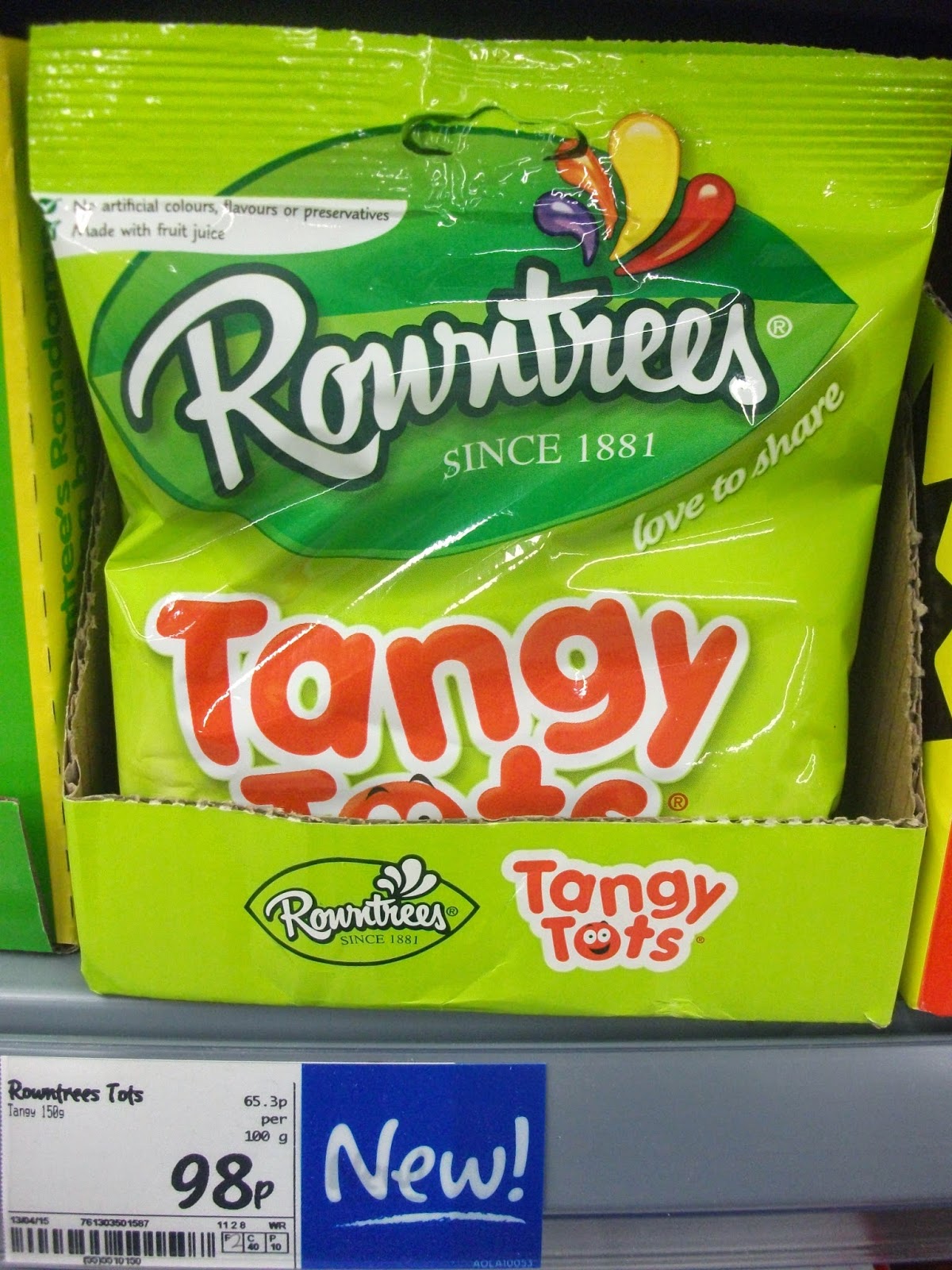 Rowntree's Tangy Tots:
Nestlé introduced Tangy Tots a while ago, but they've now added a larger sharing bag to the range. Spotted in Asda. 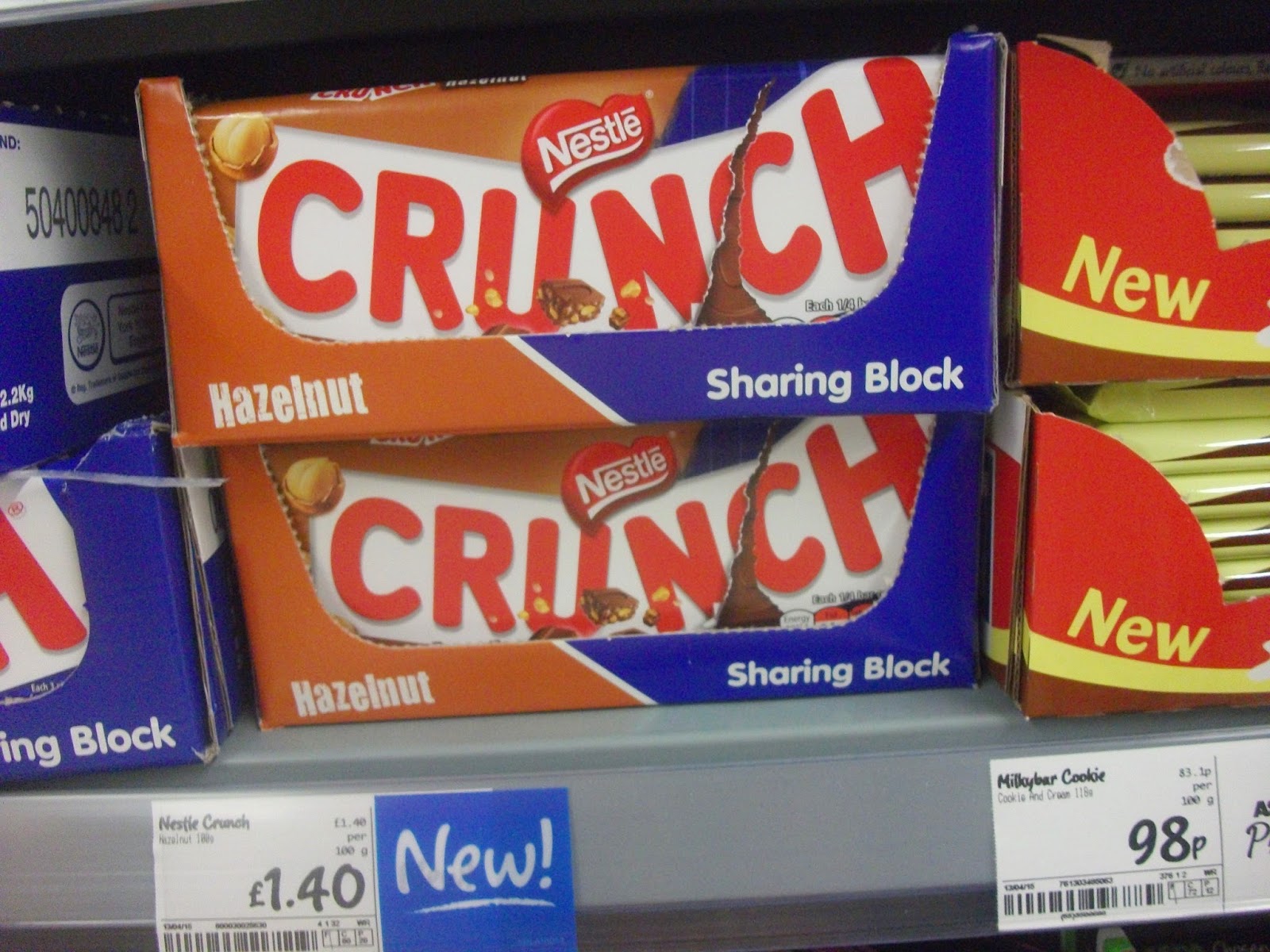 Nestlé Hazelnut Crunch Sharing Block:
Nestlé just can't stop adding new products to their range! "Crunch" has been a staple in all supermarkets for years now, and to be honest I'm surprised it still sells. This hazelnut variety has been around for a while in Europe, I believe. Spotted in Asda. 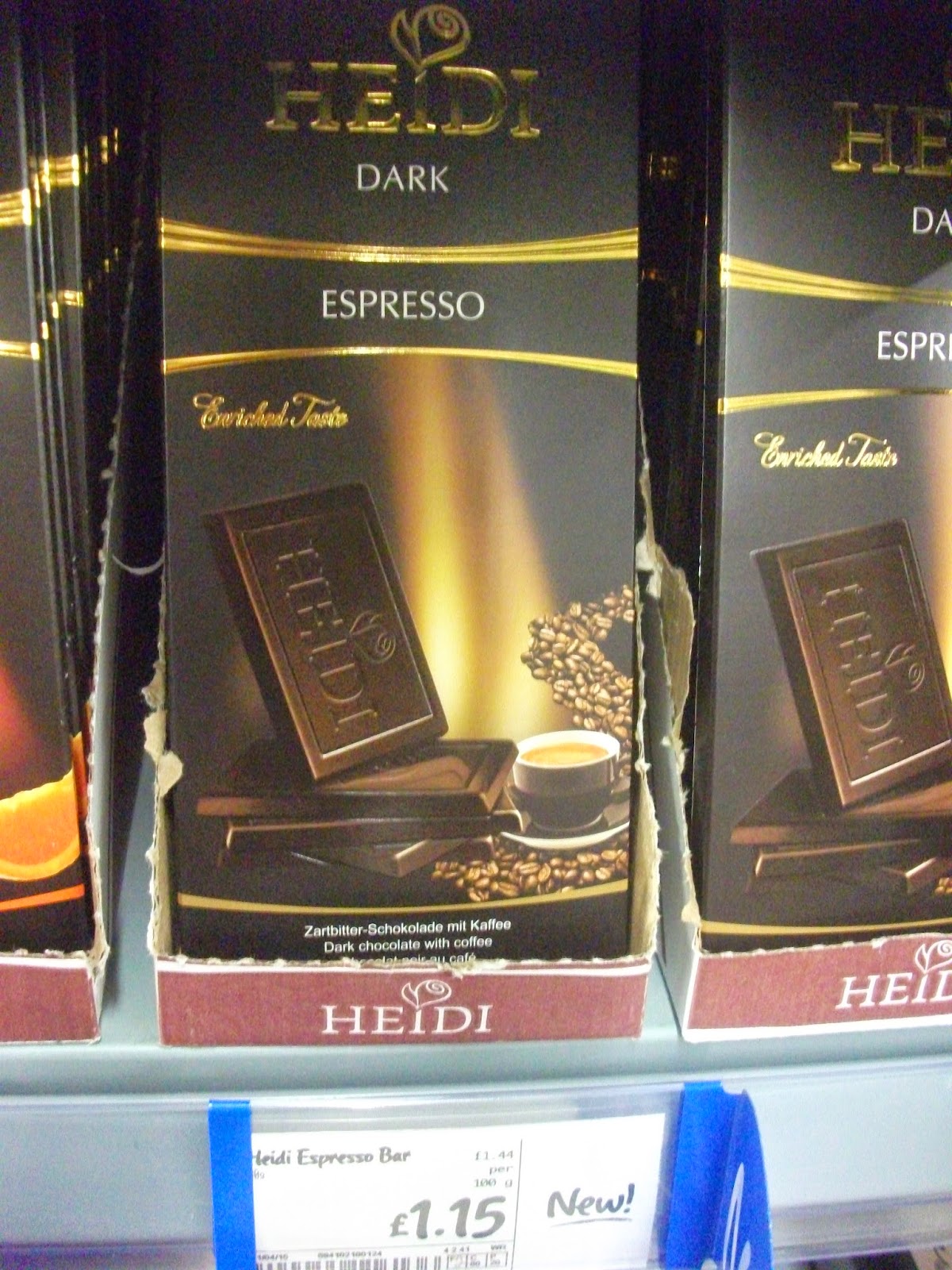 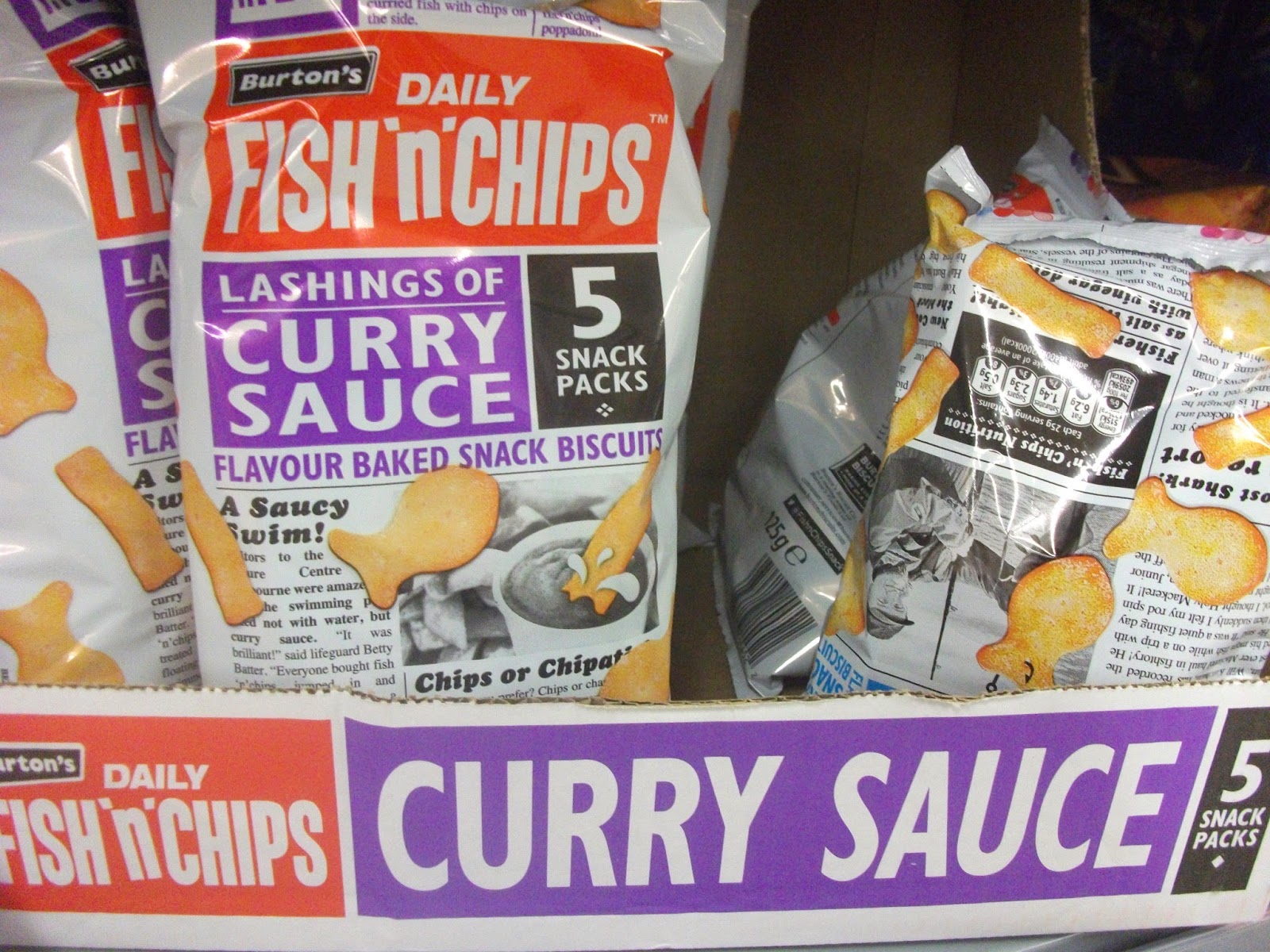 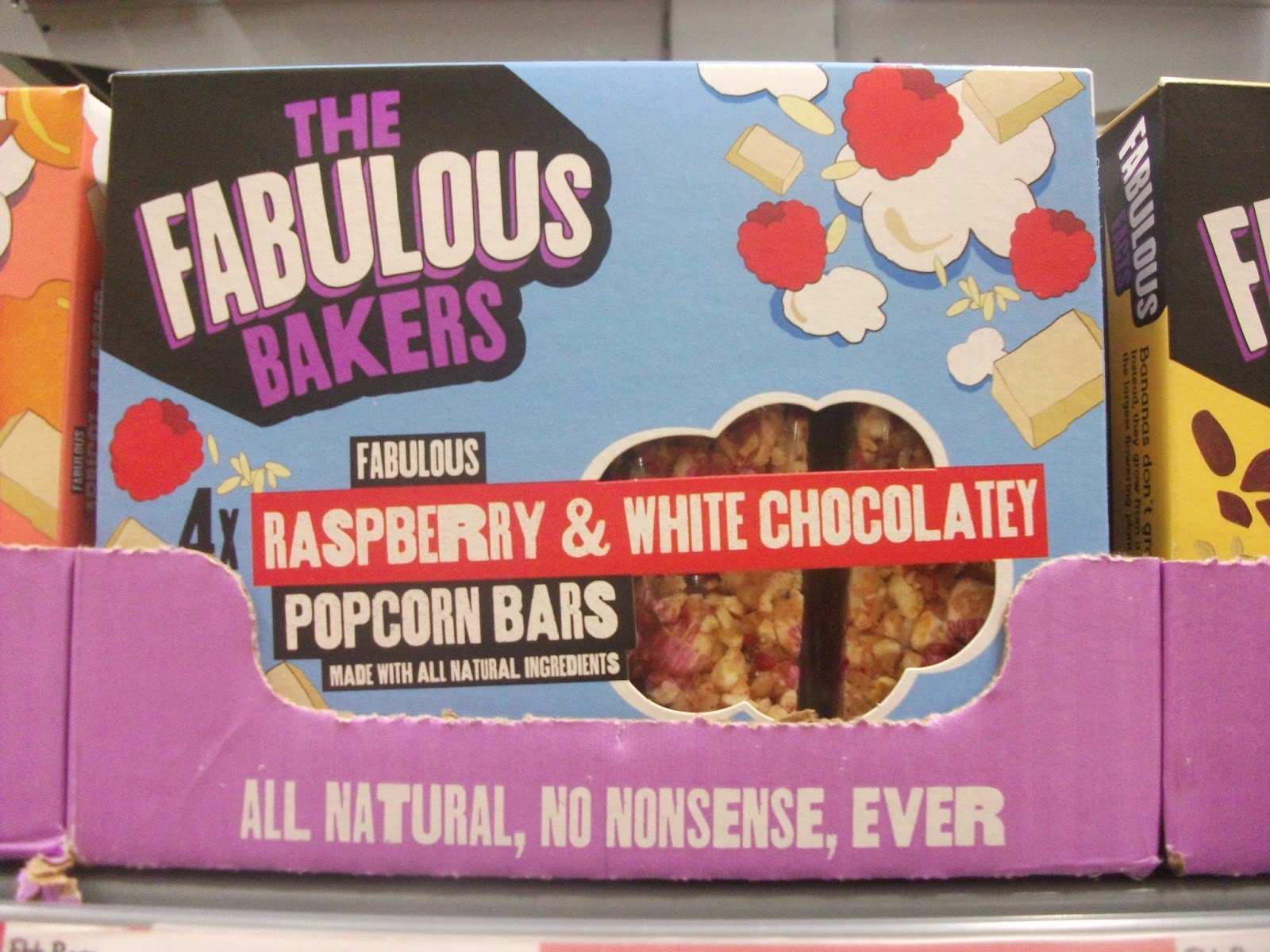 The Fabulous Bakers Raspberry & White Chocolate Popcorn Bars:
"Fabulous Bakin' Boys" have recently rebranded as The Fabulous Bakers, and have launched a new range of snack bars with all natural ingredients. This flavour sounds like an interesting combination! Spotted in Asda. 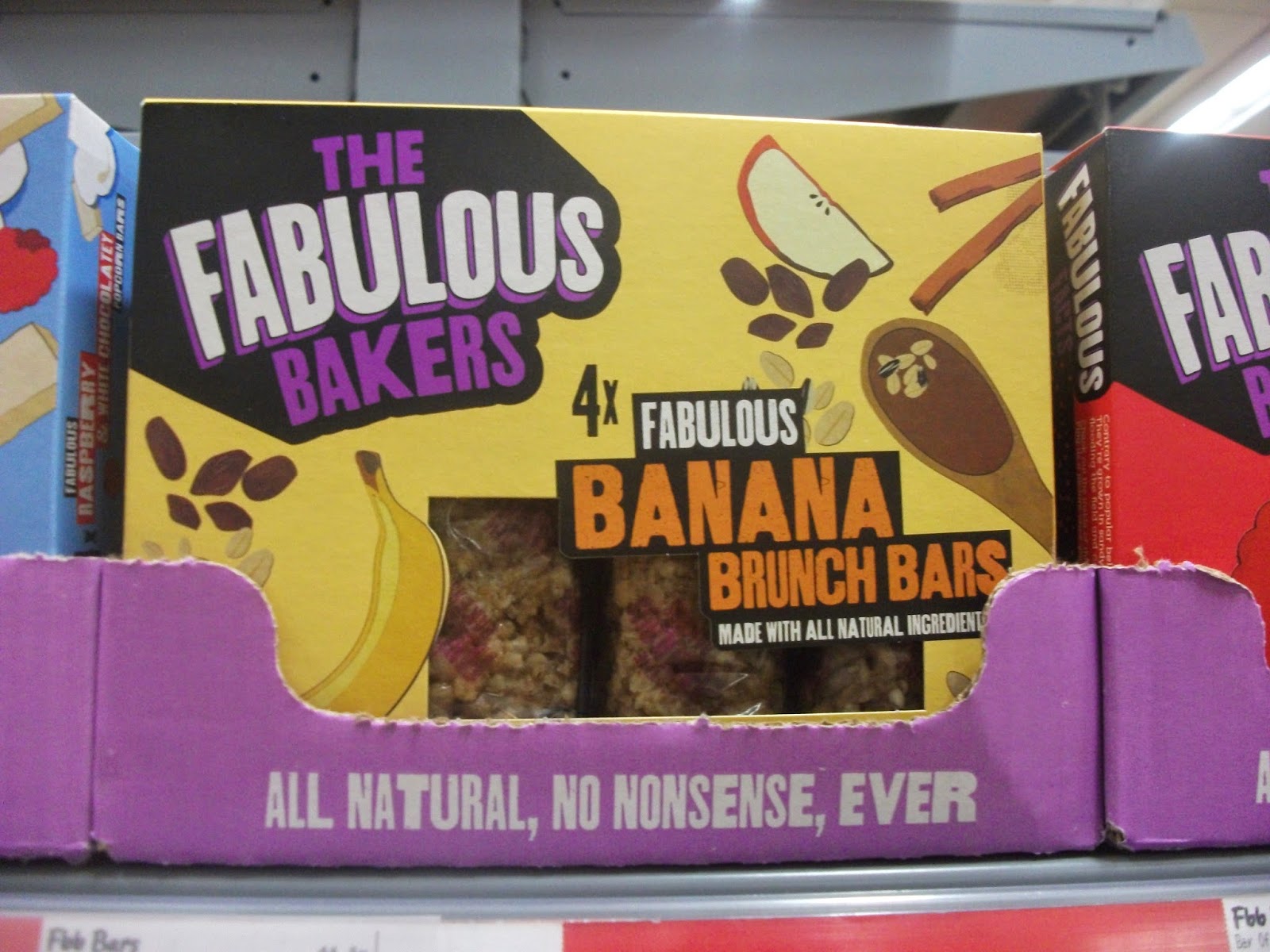 Also available in Banana Brunch...bananas must be a popular flavour this year! 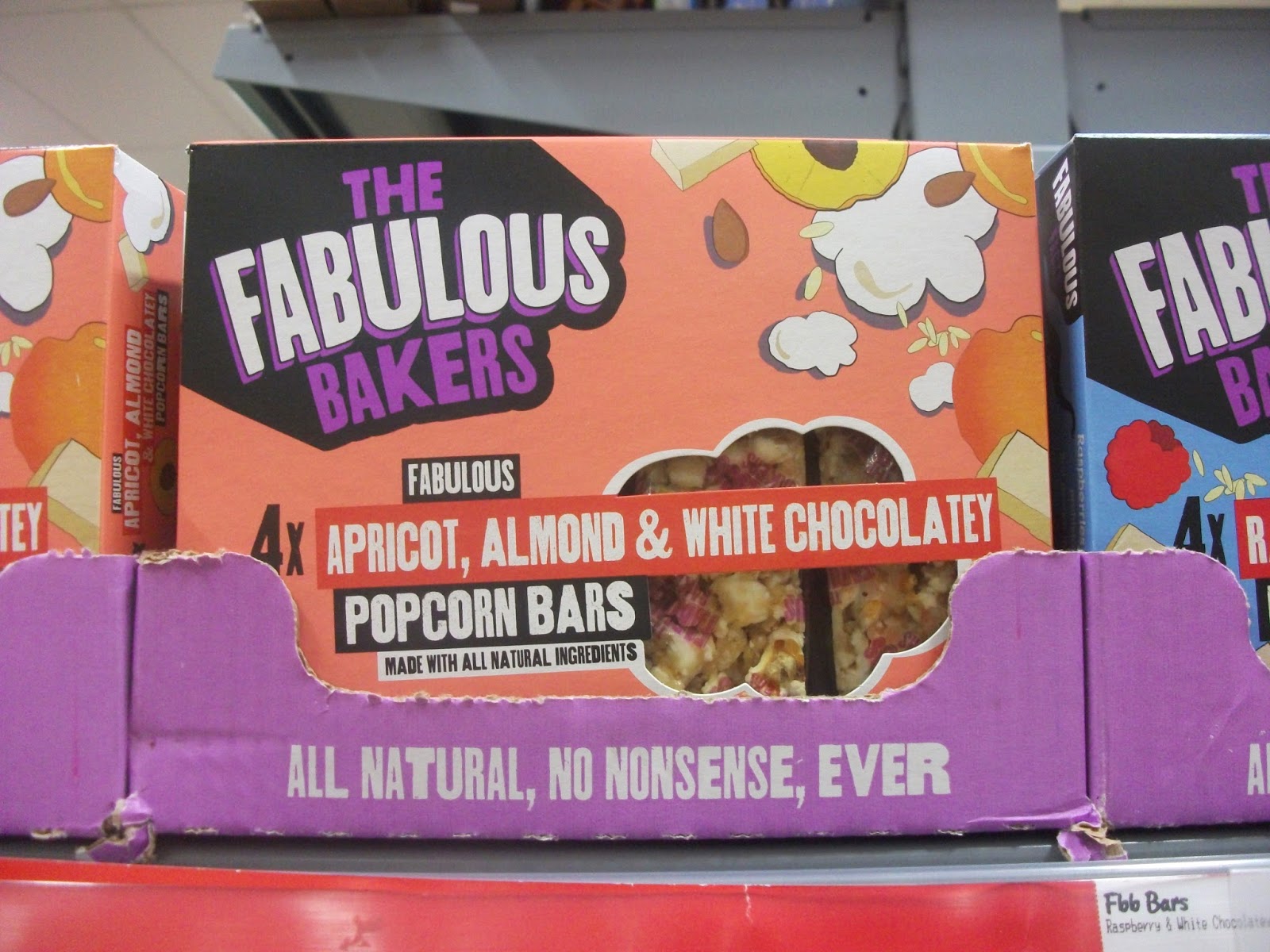 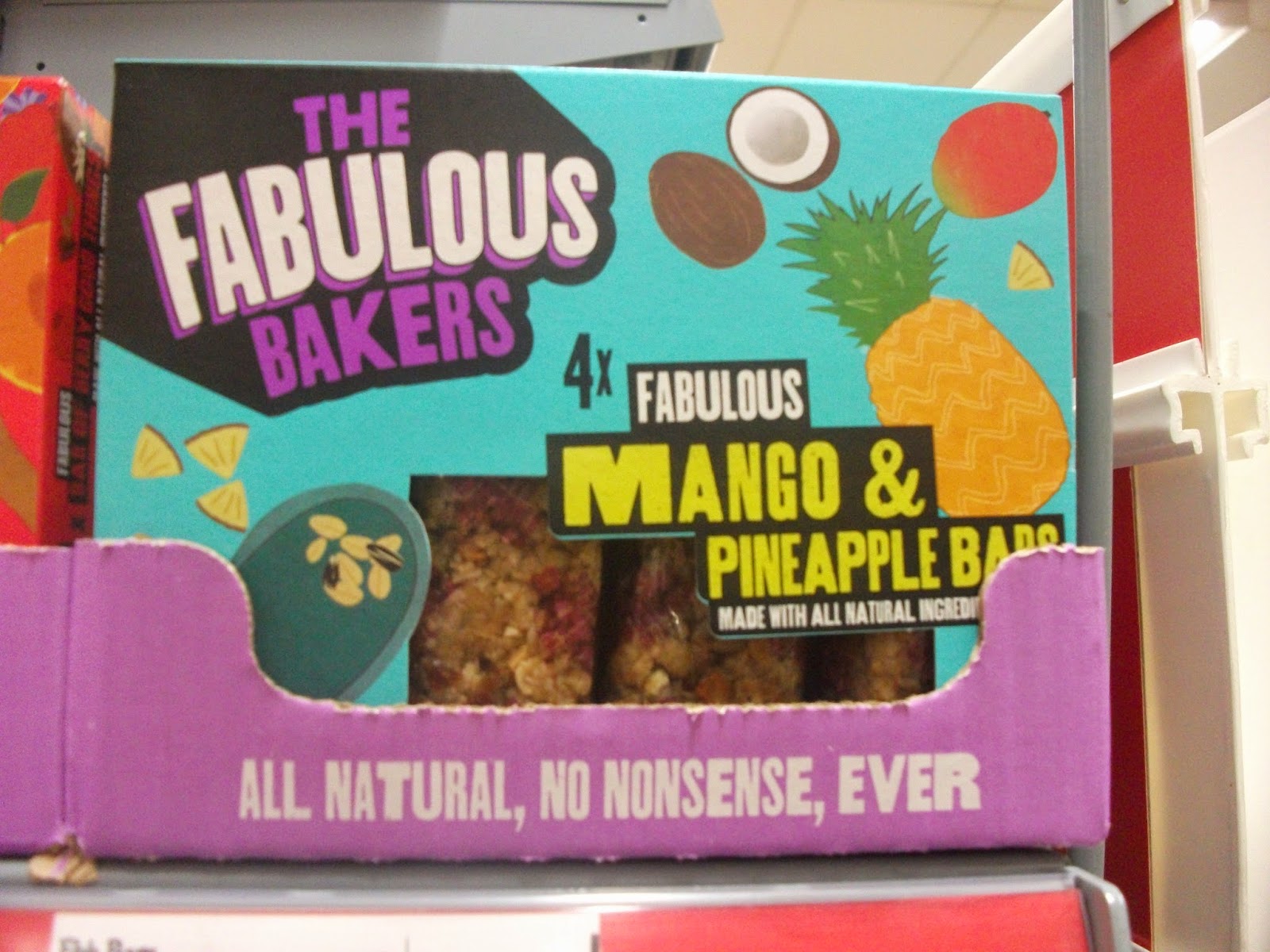 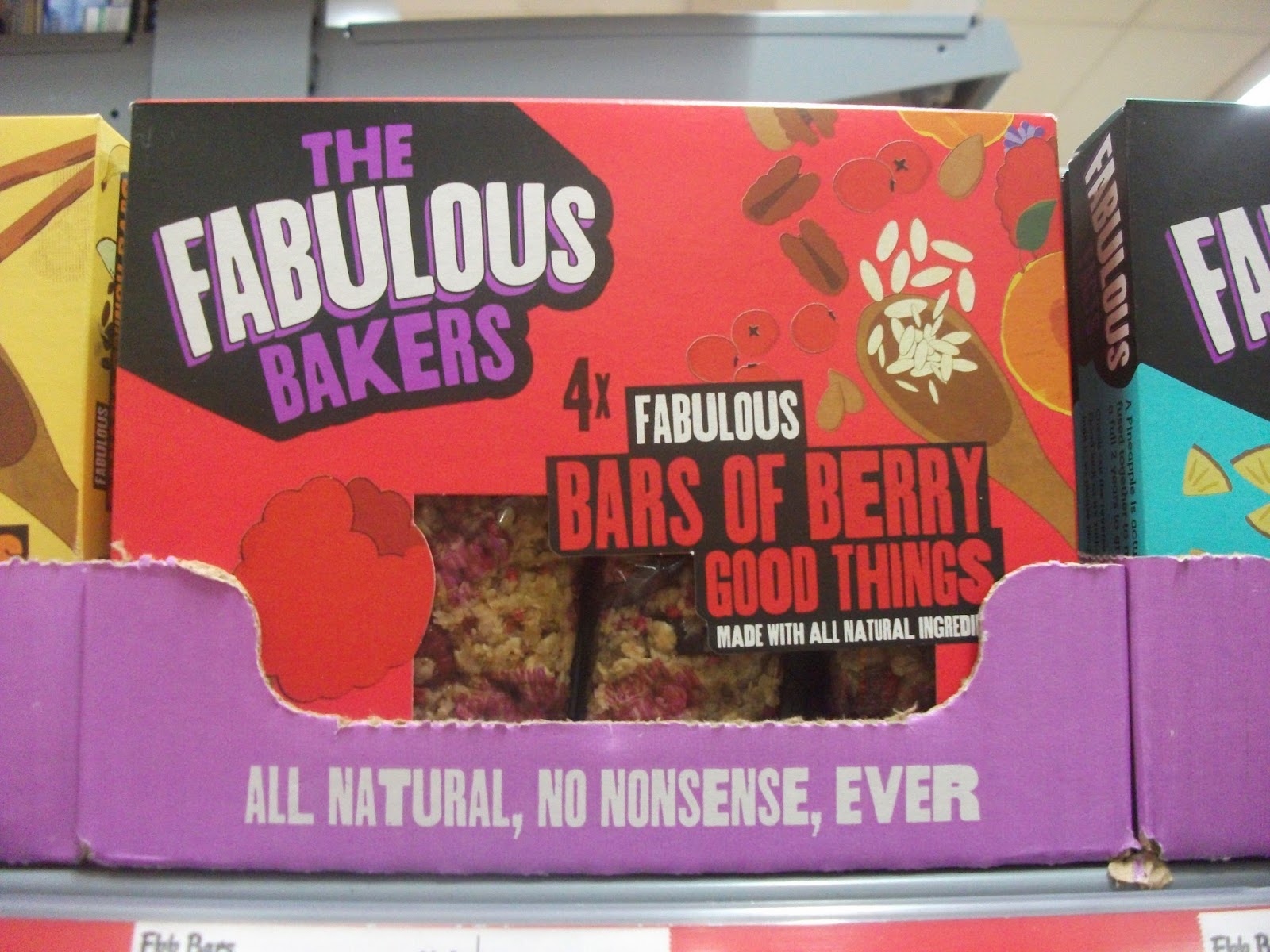