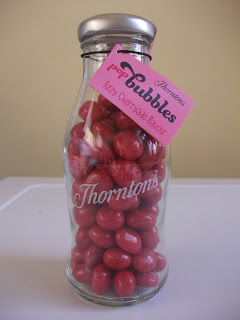 Whilst browsing my local Thorntons recently, I noticed they've changed their store layout and product range quite a bit - apparently they're doing this across all their stores at the moment. There's a lot of new novelty and gifting products, most of which didn't appeal to me (I could have sworn I saw a chocolate handbag!) until I saw this. I thought it was a bottle of jelly beans at first, but these are actually "cherry flavour white chocolates with popping candy". They cost £3.99 per bottle or you can get 3 for £10, and there's also a lemonade flavour.

The bottle is kind of weird, it looks almost like a tomato ketchup bottle but I think it's meant to resemble an old-fashioned pop bottle (incidentally, does anyone else remember when lucozade used to come in glass bottles?) 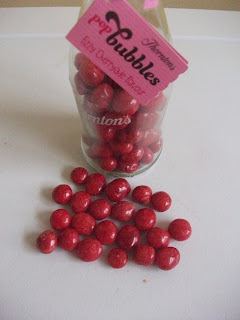 Unscrewing the cap I could smell a nice tangy cherry aroma coming from the Bubbles; they smelled just like sweets. They're irregularly sized, kind of knobbly and nugget-shaped. Cutting into them revealed the white chocolate interior: 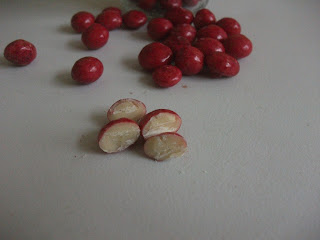 They reminded me a bit of M&M's, although the shells aren't crunchy like M&M's. Biting into one, I could first taste the tangy cherry coating, and then the creaminess of the white chocolate. It was very tasty. As the chocolate began to melt I got some bursts of the popping candy. I was expecting my mouth to be an explosion of popping candy, but it was actually quite mild. I was a bit disappointed because I love popping candy! I also love cherry flavour, so I managed to munch through a lot of these before the sweetness of the white chocolate became overbearing.

Overall these Thorntons Pop Bubbles were very tasty, if not a bit strange. They're like a mashup between a sweet and a chocolate, which might leave your tastebuds a bit confused. I think they're a great novelty product and kids will probably love them. Although in my opinion, adding some extra popping candy would make them even better.

If these are anything to go by, I'm looking forward to seeing what other new products Thorntons come up with. I might give their Lemonade Pop Bubbles a try next, I imagine the combination of lemon and white chocolate works even better than cherry.

Have you tried any of Thorntons Pop Bubbles range? If so what did you think?
Thorntons