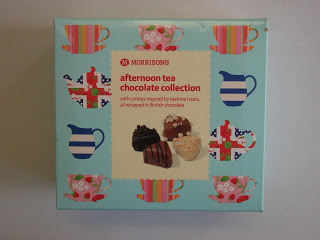 What's this? Tea flavoured chocolates... surely not? Well, not exactly. This Morrisons Afternoon Tea Chocolate Collection is "Inspired by teatime treats, all wrapped in British chocolate". And as usual, it's a load of marketing nonsense to get you to buy them. They usually cost £2.99 but had been reduced to £2 when I bought them. 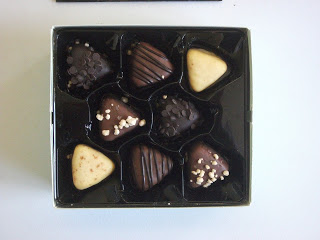 The flavours include Strawberry Shortcake, Chocolate Fudge Cake, Carrot Cake and Earl Grey. Sounds interesting, right? I thought so and was interested to see what an earl grey truffle would taste like. Well, turns out it's not that nice. I'll go through each flavour individually:

This was an okay chocolate. The filling was a mild tasting milky strawberry flavour, and tasted quite powdery. The little bits of shortcake added a nice crunch. Overall, okay but not great.

As expected, this didn't actually taste of fudge cake, it was just a piece of chocolate fudge coated in chocolate. Still it was very tasty, the fudge had a nice rich chocolatey taste and the 70% dark chocolate coating added extra richness. This was the best chocolate in the box.

Carrot Cake:
Described as: "Carrot cake flavoured truffle coated in white chocolate and finished with a dusting of ground cinnamon".

This was one I was the most intrigued by after the Earl Grey. I love carrot cake, so having it in chocolate form sounded like heaven. Unfortunately, it was horrible. The white chocolate was cheap tasting, and the truffle filling had an awful perfumed kind of taste that was very sickly. It certainly didn't taste anything like carrot cake. This was the worst chocolate in the box.

This was the one that intrigued me most, being a fan of earl grey tea. I guess I should have expected it to taste bad though, given that earl grey is such an acquired taste. To be honest, it wasn't as bad as the carrot cake flavour, but it wasn't all that nice either. It had a similar perfumey taste, and was a bit sickly to eat. The filling seemed to be a mass of milk powder and fat so there wasn't much to go on. It was just a weird perfumey lump that didn't resemble earl grey all that much.

Overall, I kind of like the concept of these chocolates, but they were very poor quality and badly executed. They're on the cheaper end of Morrisons price range, but still, I expected better. I can't see them lasting long on shelves and won't be surprised if they're discontinued. They're worth trying once to say you've eaten an earl grey or carrot cake truffle, but otherwise, I would avoid them.
Morrisons