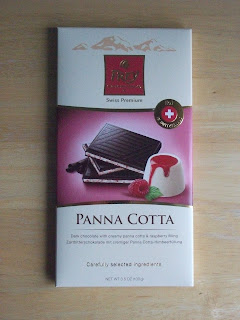 For my first review of 2013 here we have the Chocolat Frey Panna Cotta bar, which is described on the pack as "Dark chocolate with creamy panna cotta and raspberry filling". I discovered this in a discount shop whilst visiting family over the Christmas period, and being a fan of Swiss Frey products I was very excited to try it, even more so because panna cotta sounds like such an interesting flavour to pair with chocolate. And Frey are sure known for their interesting flavour combinations, haha!

I bought two of these bars for a pound, which seemed like a good deal as they were still in date for another 4 months. However when I opened the wrapper I started to worry as the chocolate had a lot of dusty white "bloom" on it, which didn't look very appetizing at all. Taste-wise, this bar was a let-down. The filling was quite milky, similar to those Lindt milk filled bars, but not as nice. I have never tried actual panna cotta so I can't say if this had a realistic panna cotta taste or not. There were little bits of dried raspberry in the cream, which tasted ok. Dipping a square of the chocolate into coffee improved the experience by making it all nice and melty, but it was still far from amazing. I think the filling would have been better suited to milk or white chocolate to be honest, as the creaminess jarred too much with the dark chocolate and the two flavours didn't really work together. 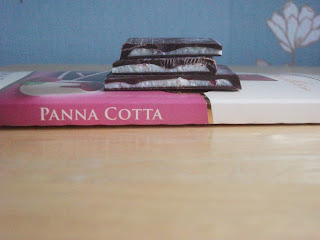 Overall I guess I shouldn't be too harsh on this bar as it was obviously heat affected from being imported. I'm hoping to find more bars from the Frey range in the future, so fingers crossed for that! And a belated Happy New Year to my followers!
frey