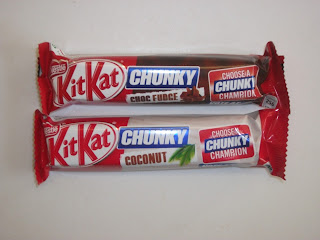 This is my final review for the new Kitkat flavours released as part of Choose a Chunky Champion. So far I feel all the flavours have been a bit lacklustre and haven't offered a great deal of excitement, including these two. When I opened them I was surprisingly more tempted by the smell of the Choc Fudge as it had a delicious fudgey smell going on. The coconut in comparison smelled quite artificial, and certainly didn't smell as nice as a Bounty bar that's for sure. Out of the two the Choc Fudge was also the only one to add something different - the chocolate fudge paste. The Coconut was just coconut flavoured chocolate and that's all. I feel Nestle could have put more effort into it and done some kind of creamy coconut filling or something. It's almost like they don't *want* it to win the Chunky Champion.
The Coconut  Chunky tasted alright, it was a nice change from the norm and had a decent coconut flavour, but it got a little bit sickly for me. Still it was nice enough. I think it will win the Chunky Champion because it's the most exotic sounding bar of the lot.

The Choc Fudge Chunky was a bit plain and overly sweet, with its layer of sweet chocolate fudge paste atop the crunchy wafer. Taste-wise it reminded me of the Caramel Kitkat Chunky from a few years back, although richer because of the chocolate influence. I don't think it will win the Chunky Champion as it's just not "special" or interesting enough.

Overall, the new flavours for Choose a Chunky Champion have been a very mixed bag this year, some were nice (ie. my previously reviewed Mint) whilst others were lazy and boring. I think mint or coconut will take the crown, but I can't see any of these bars lasting that long if they are made a permanent addition to the Chunky range.

Does anyone remember Kitkat Editions from years ago? The idea of them was that they would release new Chunky flavours seasonally. They did red berry, seville orange, tiramisu and mango and passionfruit flavours...now they were truly different indeed! Bring them back Nestle! Plus, who can forget the legendary Kitkat Caramac?

(Sorry for all the links...I just love reminiscing about old snacks!)
Kitkat Nestlé