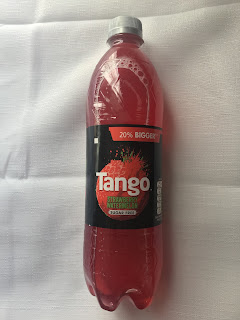 Tango has had a bit of a rebrand recently, and added two new sugar free varieties to its range: Tropical and Strawberry and Watermelon, which is today's review. People have been talking a lot about it over on Instagram - it seems that adding watermelon to drinks increases excitement levels by at least 50%! ;) Maybe melon will be the new Unicorn Trend, which might not be such a bad thing... 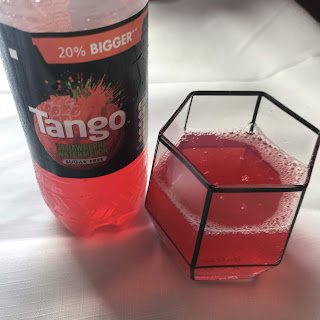 I bought this 600ml bottle from Poundland from the chiller section. There's also a can version there (along with Tropical, Cherry and Orange flavours) on the three for £1 deal, plus most supermarkets now sell multipacks of cans and large bottles.

I used my fancy Root 7 glass to drink it from - let's take a moment to appreciate just how cool this glass is! (I've lost count of how many times people ask me about it on Instagram). 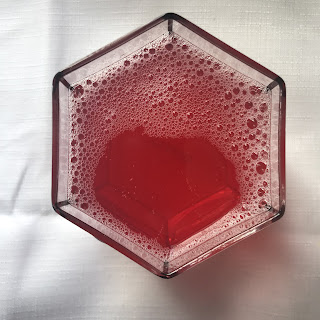 Being a sugar free drink this of course contains artificial sweeteners, which are acesulfame k and sucralose. Not the best things in the world - I do wish companies would use stevia or erythritol instead as at least they're more natural, but I guess the masses aren't  ready. The ingredients also list 4% watermelon juice and 1% strawberry juice from concentrate, so at least some of the flavours are authentic.

This is a pleasant enough drink, it's very sweet and refreshing and tastes of the flavours it's supposed to but...the sweeteners ruin it for me. Now maybe I'm just more sensitive than most folks but I can always taste them strongly and I really don't like 'em - they make what could be a nice natural tasting drink into something artificially sweet. Honestly, using a dash of real sugar would be preferable (or even lots of it aka Fanta Fruit Punch!). But then I guess these wouldn't be "diet" drinks anymore. Ho hum.

Overall, not a bad flavour if you like sugar free artificially sweetened drinks. I don't, so won't be buying this again - I'd rather stick with the full sugar or natural fruit sugar sweetened drinks.