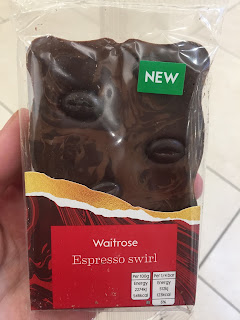 So there's been a big fight recently between Waitrose and luxury chocolatier Hotel Chocolat; the latter have claimed that Waitrose's new chocolate slab range are copying their famous Selector bars (see my #slabgate post for pics of the new range). They've even gone as far as taking legal action, but that hasn't stopped Waitrose who launched their new range this week. I thought I'd try one of the bars to see what all the fuss is about - would it live up to Hotel Chocolat's high standards?

I chose the Espresso Swirl bar as it appealed to me the most; these are currently on offer for £2 and this bar is described as "Marbled Belgian milk and dark chocolate delicately swirled with hazelnut praline and coffee, topped with chocolate mocha beans". Sounds delightful doesn't it? 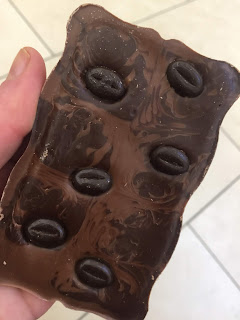 Opening the wrapper it was definitely reminiscent of Hotel Chocolat's slabs, the sides are curvy although less so than a HC bar. 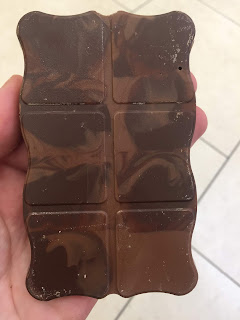 One side contains the coffee beans whilst the other is divided into blocks. It certainly looks aesthetically pleasing. 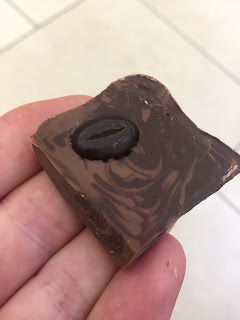 I broke off a few pieces and took a bite. The chocolate is pretty creamy, but in a standard "supermarket own brand" kind of way, it's not particularly distinctive. I couldn't really taste the hazelnut praline at all as it got a bit lost in the coffee flavour. The "mocha beans" (not actual coffee beans) are a nice touch but don't add much more to the bar. Overall it's a pleasant enough chocolate bar, but far from amazing and certainly not something I would buy regularly. In terms of quality it doesn't compare to Hotel Chocolat at all.

All in all, as my first try of this new range I can kind of see why Hotel Chocolat might be upset. The quality is nowhere near as good but no doubt Waitrose customers will buy these bars thinking they're similar to or even made by Hotel Chocolat.