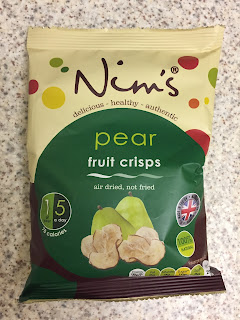 Recently I read an article in The Grocer about Nim's Fruit Crisps and how they've become so popular they're now being sold in Tesco stores. After spotting some in my local Tesco Express I thought I'd give them a whirl to see what all the fuss is about. They're described as 100% natural, with no added sugar or sweetener, air dried rather than fried and are made in the UK. They're gluten free, dairy free, suitable for vegans, and certified as one of your portions of fruit and veg per day. I can't remember the exact price these were, but it was around £1 or so which is quite a bit for 22g of crisps, so I was hoping they'd be worth it! 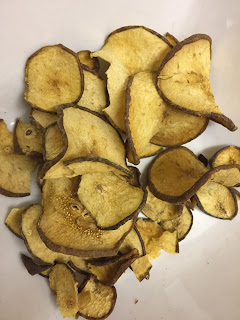 Opening the bag, I tipped them into a bowl. They looked a bit like fried courgettes, or maybe it's just me? 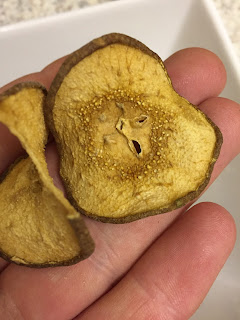 It was obvious these were 100% natural going by appearances - honestly, they didn't look so great haha!

I've tried things like this before - such as Morrisons Carrot Crisps - so with these being fruit I was expecting them to be nicer in comparison, but honestly I didn't like them at all. The texture is weirdly chewy, despite their crunchy appearance and the taste is mild and not particularly fruity. They just seemed a bit "nothing-y" and weren't a very filling snack.

Overall, I'm a bit at a loss over what else to say about these other than I didn't enjoy them much and probably wouldn't buy them if I needed a healthy snack. If they were crunchier that might be an improvement, or maybe apple crisps would have more flavour. I don't know if they do an apple version but I'll certainly keep my eye out to do a comparison. These are certainly very healthy, but not for me taste wise.

Have you tried Nim's Fruit Crisps? Let me know your thoughts in the comments!