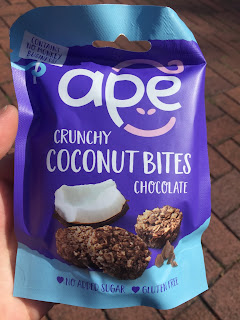 I'm a big fan of Ape Snacks Crunchy Coconut Bites. When I tried them initally I was a bit iffy but since then I've bought a fair few packs, in fact they're my go-to snack now when I'm looking for something healthy and low in sugar. So I was excited when I saw this new Chocolate variety appear in Sainsbury's Express stores recenelty. It's pretty much the same recipe as the original plain bites, but with the addition of coconut nectar and cocoa powder. 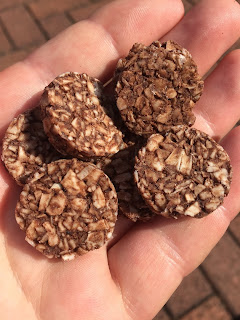 Like the original bites these are £1.50 and suitable for vegans, gluten free and the packs says "no added sugar", which I don't really agree with since they contain coconut nectar, which is pretty much a sugar. But hey ho, they're still healthy and lower sugar than most snacks of this nature.

They tasted pretty good, with a nice cocoa flavour and a subtle sweetness from the coconut nectar. I wouldn't say they were better than the original variety but they're a nice change and certainly a good addition to the range. I would personally like to see a chocolate coated variety - perhaps using unsweetened chocolate, which would be a real treat indeed for anyone avoiding sugar!

Overall, these a nice addition to the range and perfect if you want something with a chocolatey flavour that is still healthy. They're a great alternative to crisps or cereal bars.