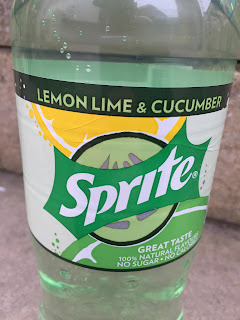 Whilst in Tesco recently I spotted a rather new and unusual flavour of Sprite and must admit I had to do a double take - "Does that say cucumber?!" I thought. Yes, indeed it did, and as a new flavour I had to give it a try in the name of snacks science!

This variety is available in multipacks of cans or large 2 litre bottles in both Tesco and Morrisons. I went for the bottle which cost a pretty reasonable £1. 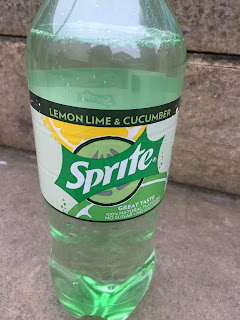 The ingredients consist of fizzy water, sweeteners, citric acid and natural flavourings. I'm not usually a fan of drinks like this due to the artificial sweeteners, but we can let that slide once in a while right?

Opening the bottle I was met with a cucumber aroma that wasn't really enticing...in fact my reaction was "ewww!" But nevertheless I took a sip, and after the initial faint cucumber flavour disappeared I was met with the traditional sweet lemon and lime Sprite flavour. It's actually not too bad at all and is rather refreshing - I certainly drank a fair bit. I've heard that it tastes better with gin, which I can't vouch for but I'm sure is true!

Overall, not a bad flavour once you get past the initial "ewww" factor. I don't imagine these will stick around for long so if you like the sound of this flavour make the most of them!