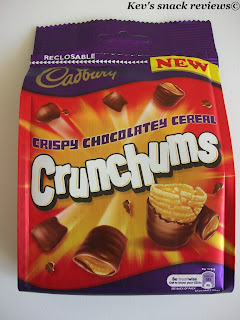 It's been a busy year for new Cadbury product releases. So far we've had Wispa Hot Chocolate, the Dairy Milk Marvellous Creations range, Pots of Joy, the soon-to-be released Dairy Milk Strawberries and Creme...and now these!

I spotted these Cadbury Crunchums on offer in Morrisons along with the rest of Cadbury's bagged range for 99p. They're crunchy maize cereal snacks coated in Cadbury chocolate, described as "crispy chocolatey cereal". Unfortunately the chocolate used isn't Dairy Milk but is Cadbury's sweeter, lower quality milk chocolate. It doesn't really matter though, because it works well with these snacks. 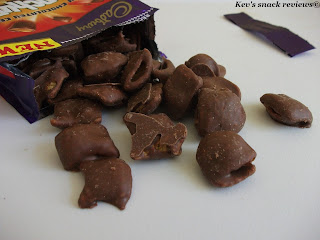 I wasn't sure what to think at first. Biting into one I was met with a slightly salty, savoury kind of taste, almost like crisps. The sweet milk chocolate provides a nice contrast which works surprisingly well, and after a few mouthfulls I was totally hooked and found them extremely moreish. They're quite light as well as being crunchy which makes it very easy to eat a lot at once. 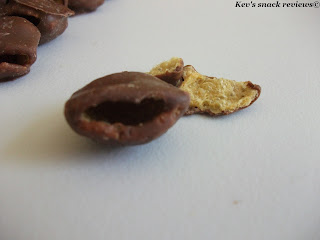 Overall, a tasty new product from Cadbury's which I'm sure will be very successful. I think they would make a great snack for taking to the cinema, which is a theory I plan on testing out. (All in the name of Science, of course!)