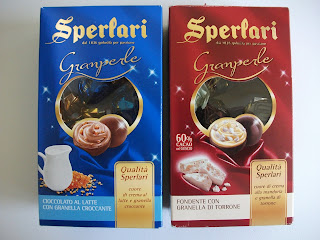 Whilst in Family Bargains recently I came across these Sperlari Granperle pralines. Family Bargains always seem to sell obscure European branded chocolates, such as the LaCasa Pineapple Praline and Pergale Coconut Centres I've reviewed previously. These Sperlari pralines caught my attention because they look a bit like Lindor truffles, and indeed they were very similar!

They're basically ball shaped truffles that contain different fillings. There were three different varieties at Family Bargains but I went for Milk Chocolate with gianduja and caramel crisp, and Dark chocolate with almond cream and nougat.

Dark Chocolate with Almond Cream and Nougat:
These weren't quite as nice as the milk chocolate version but were still very tasty. The chocolate contains 60% cocoa solids which made them much richer, and the almond cream filling was sweet and milky with a cinnamon hinted flavour. The nougat grains tasted of honey and almond, similar to the nougat in Toblerone. They were very tasty but I couldn't eat too many at once.

Overall, I think these Sperlari Granperle are fantasic value for the price as they're very good quality and unique, and the Milk and Caramel Granperle are very addictive! I hope to see them again at Family Bargains - next time I want to pick up the hazelnut praline variety I didn't get the last time. If you happen to see these in any discount stores I would definitely recommend them!

Price: £1 per 160g box.
Made by: Sperlari, who are an Italian company. Their website is www.sperlari.it.
Sperlari