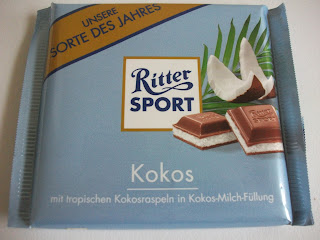 Thankyou to Monster Sweets who once again kindly sent me some Ritter Sport bars to review. Monster Sweets are currently stocking the new Ritter Spring Varieties Crema Catalana and Kakaosplitter that I've reviewed previously, plus Milka with Tuc & LU. You can check out their website here:
http://www.monstersweets.co.uk/

I was very excited when I first heard about this Ritter Sport Kokos/Coconut. Ritter Sport are great at making bars with creamy fillings, as I found with the Crema Catalana, so a bar with a coconut cream filling sounded amazing! It's quite hard to find coconut cream filled bars; I believe Lindt do one in Europe and even Sainsbury's used to do one in their Taste the Difference range. Lindt also recently launched their Coconut Lindor which are very, very tasty indeed. So how does the Ritter Sport Kokos compare?

Well, it was very delicious! The filling tasted very creamy as I expected, with rasps of coconut running through it, which added a nice bit of crunch. The milk chocolate was of Ritter's usual good quality, and combined with the creamy filling made this an indulgent tasting bar. If you're a fan of coconut chocolate I think you'll enjoy this a lot - it's much more luxurious than a plain old Bounty bar. Infact it reminded me a little of Coconut Lindor, although it's less sweet and more chocolatey than they are.
Overall, an indulgent and creamy bar of chocolate which I will definitely be trying again at some point.

The front of the pack says "Unsere sorte des jahres", which translates to "our sort of year" with google translate. I'm sure that can't be right - I think it's probably meant to be "Variety of the year" or something like that. If anyone knows please do leave a comment! 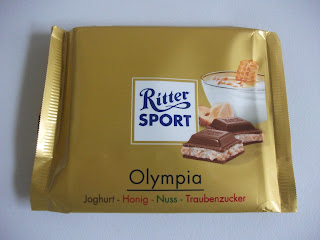 Ritter Sport Olympia:
I've wanted to try this bar for ages but could never get a hold of it. Apparently it was originally introduced as a limited edition flavour in Germany, discontinued and then brought back due to popular demand. The description translates as "milk chocolate with a yogurt filling containing honey, nuts and dextrose".

I have to say it took me a while to get used to the taste of the yogurt filling. It had a sharp and tangy flavour, which I'm not used to in chocolate bars. I presume yogurt is a more common chocolate bar flavour in Germany as several brands over there seem to have variations of it.

I warmed to the yogurt filling after a few pieces. It had a sweet honey flavour, as well as a nice savoury crunch from the nuts, and the dextrose added an extra sweet crunchiness. I liked the contrast between the crunchy nuts and dextrose pieces with the tangy, creamy filling. It's a unique combination and I can see why there was a demand to bring it back.
Overall, a unique bar of chocolate which I would recommend especially if you're a fan of yogurt.

These bars are available from Monster Sweets UK, who offer a large range of Ritter Sport bars and good value postage: