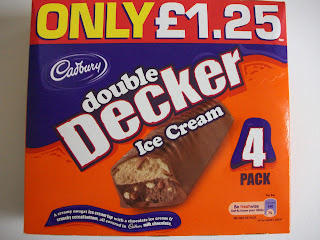 Incase you have never heard of a Double Decker bar before, here is an introduction thanks to Bible of the Internet, Wikipedia:

"Double Decker is a brand of chocolate bar currently manufactured by Cadbury. First introduced in 1976, its name derives from the double-decker bus, and these vehicles have invariably appeared in advertisements for the product. The chocolate bar is lightly flavoured with coffee and structured in two layers; an upper whipped nougat layer, with a lower layer of cereal 'crispies', these are then coated in milk chocolate. Originally the bar contained raisins within the base layer, however consumer research in the mid-1980s led to these being removed and the current formulation being introduced."
Source: http://en.wikipedia.org/wiki/Double_Decker_%28chocolate_bar%29

This ice cream version is significant because it's the first time Double Decker has ventured into ice cream (the brand, not the bus - it probably wouldn't be a good idea for a double-decker bus to venture into icecream!).

It's described as "A creamy nougat ice cream top with a chocolate ice cream and crunchy cereal bottom, all covered in Cadbury milk chocolate". 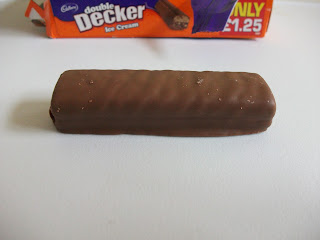 Cutting a bar in half, it certainly looked the same as a Double Decker, with the nougat ice cream layer on top and the crispy cereal and chocolate ice cream layer at the bottom. It was never going to replicate the exact same taste or texture as a real Double Decker, but it did a pretty good job. The upper layer tasted somewhat malty whilst the bottom layer was chocolatey and had a nice crunch from the rice cereal pieces. The milk chocolate coating had a familiar Cadbury taste and finished things off nicely, making for a tasty little ice cream bar. 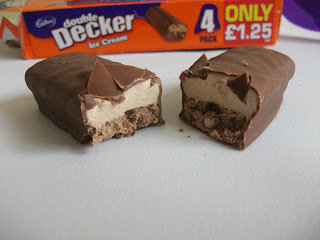 Overall, I thought these were a decent replication of Cadbury Double Decker, and a good snack for the price. I would recommend them!

Price: £1.25 for a 4 pack at Morrisons.
Allergy advice: Contains milk & soya, may contain nuts and wheat. Suitable for vegetarians.
Cadbury 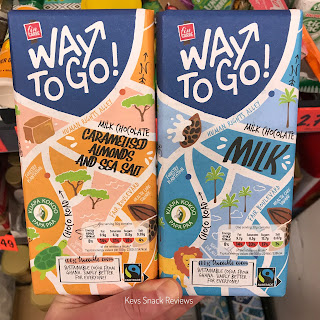