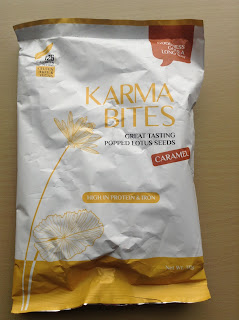 Today I'm reviewing something a bit new and innovative on the UK "healthy snacks" market, one that is truly a first: popped lotus seeds! Who knew such a thing even existed? I've heard of lotus seeds and roots before - I've tried fried lotus root in fact and it's rather nice, a bit like fried potato. But popped seeds is something I didn't think possible. Turns out it is and it makes for a tasty, light popcorn-like snack!

According to the pack Lotus seeds come from the Euroyale fox flower - a type of water lily. They contain protein as well as fibre and iron. They make a nice substitue for popcorn if you're grain sensitive or looking for something a bit lighter. 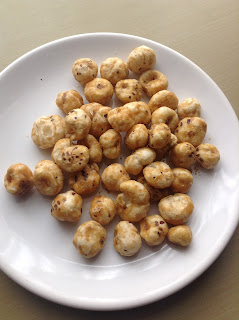 Being more of a fan of sweet rather than salty flavours, of course I went for the Caramel variety first. The flavour here is achieved simply through sugar and vanilla coating the popped lotus seeds. 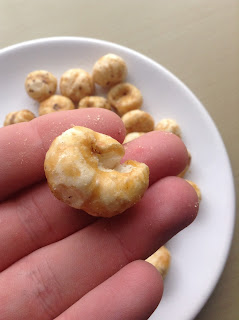 And they tasted rather nice indeed! The sweetness isn't too overpowering like what you get from caramel coated popcorn, rather it's gentle and subtle and works well with the texture of the seeds. They're nice and crunchy and super moreish, and somehow feel pretty substantial.

Overall, as my first introduction to the brand I was pretty impressed with these! 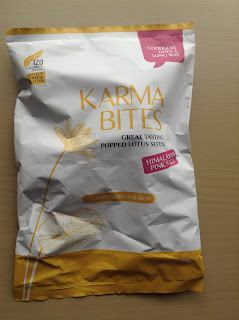 Saving the trendy Pink Salt variety for second, these had a slightly paler colour when I poured the bag onto a plate. 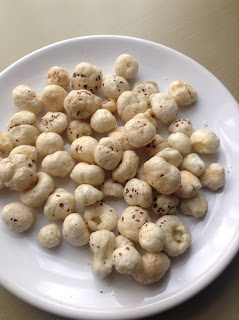 There were little specks visible on them which I presume is part of the lotus seed kernal. They tasted very nice, again they were light and puffy like the Caramel version, but also crunchy and rather moreish. They're very easy to eat!

Overall, for a healthier snack Karma Bites are a great alternative for anyone avoiding grains like corn or gluten, or if you're vegan or dairy free. I'd definitely buy a bag of these again if I see them in shops, it's always nice to have alternatives to regular old potato crisps!


For more information on Karma Bites and to buy online, check out their website: https://www.karmabites.co.uk/