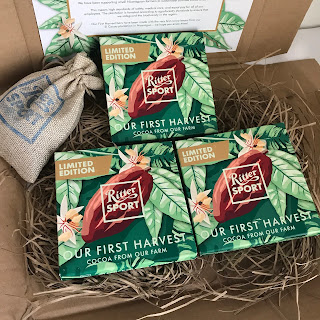 I've reviewed a number of Ritter Sport bars over the years and I have to say, it never gets old, I always look forward to any new varieties they come out with, and today's review is no exception. This is their "Our First Harvest" bar, of which there is only a limited amount, but you can be in with a chance of winning one if you head over to Ritter Sport UK on Twitter or Instagram. Good luck! I'm so glad to try these and that Ritter Sport UK are making their range more widely available here. 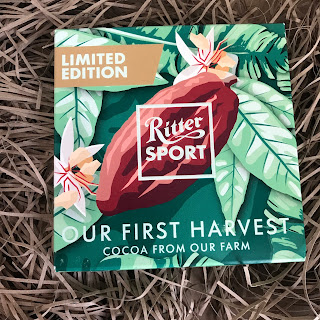 This is a particularly special bar because it's made with first harvest cocoa beans, from Ritter Sports very own farm that supports sustainable cocoa production. 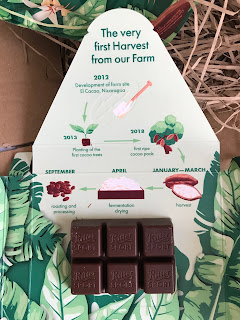 In 2012 Ritter purchased land in the eastern part of Nicaragua and are now actively involved in the sustainable cultivation of cocoa, which is important because it supports biodiversity and good working conditions for farmers. As well as that, it means tasty chocolate!

I didn't realise quite how long cocoa takes to grow - according to the box the first cocoa trees were planted in 2013, and the first ripe cocoa pods were dried, fermented, and formed into chocolate in 2018. Mind blown! 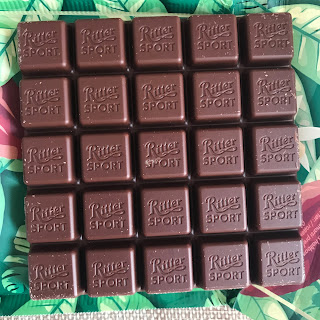 All that effort in the growing is thankfully reflected in the taste. The bars are in the same thick block design as regular Ritter Sport, but in smaller chunks, which is great because it means you can focus on appreciating the taste more. As you should do with special chocolate! Ritter Sport chocolate is always nice; it has that good quality rich flavour whilst also being creamy, but it's taken up a level with this bar. The cocoa solids are 54% so it's a lot richer than their standard milk chocolate, whilst the 14% milk solids is enough to give it a creamy palatable edge. They've got the balance just right - you can taste the unique flavoursome cocoa beans, whilst the milk mellows the flavour and makes it creamy. Very rich, something to savour and enjoy rather than gobble up quickly! 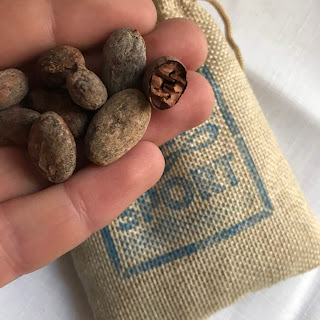 As well as the bars Ritter also sent me a little bag of real cocoa beans which are presumably from the first harvest. Wow! I've never seen a cocoa bean "in the flesh" before, so to speak! I'll certainly be keeping the bag as a little mememto. I bit into one of the beans (I like to live dangerously!) and the innards tasted like cacao nibs. Very strong, a bit like coffee beans - if you've ever tried cacao nibs you'll know what I mean!

Overall, a massive thankyou to Ritter Sport for these bars, this is such a good incentive and I am so greatful to have tried these. Ritter really is a great company in combining quality chocolate with ethical principles. This is how companies should operate, and hopefully over time others will follow suit!