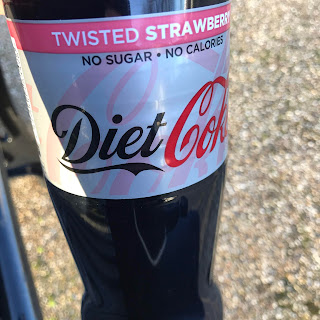 Today's review is a face-off between the new Diet Coke Twisted Strawberry and Coca Cola Zero Raspberry. Both are new for 2019 in the UK and presumably are replacing the Mango and Peach flavours from last year. The Twisted Strawberry seems to be exclusive to Tesco and is rather hard to find at the moment - it's been appearing in some Tesco Express stores so far but not larger ones. Raspberry seems to be an Asda exclusive currently. 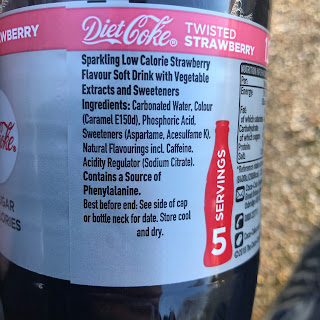 I'm not a huge fan of artificial sweeteners; I'd rather have full sugar coke, but still I had to try this for snacks research purposes. Ha! It costs £1.25 for a 1.25 L bottle and is described as "Sparkling low calorie strawberry flavour soft drink with vegetable extracts and sweeteners". I found this in a small Tesco Express store so if you're on the hunt, that's your best bet.

Taking a swig, at first I was overwhelmed with a super strong strawberry flavour - wow this stuff is potent! Think strawberry laces or strawberry sweets from Pick & Mix and you'll get an idea of it. Super sweet and super artificial...but nice. The problem though is that the strawberry is so overpowering it almost drowns out the coke taste. So it's nice if you want some strawberry flavour pop with a hint of cola, I guess. As for the "twisted" bit? Who knows. I don't think you can twist a strawberry very effectively...

Overall, this makes a nice change from the norm and is better than the flavours from last year, but I think it could have been better. 8/10. 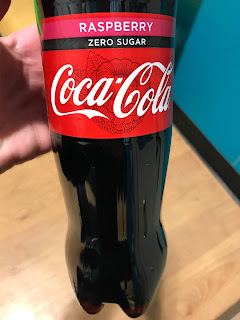 The Coca Cola Zero Raspberry was one I wasn't so interested in initially, however I finally caved out of curiosity and bought a bottle. These are available in Asda currently in all sizes - small bottles, large bottles, 1.25 L bottles and cans. Weirdly, the smallest bottles cost more than these 1.25 L ones! (These are £1 whereas the smaller ones are £1.25). Obviously it was a no-brainer which one to go for...

I had a swig of this after a hectic shop and I have to say, it surprised me! It's lovely. A nice fresh zingy raspberry flavour, that reminded me of those raspberry flavour drinks that came in little pots, where you puncture the lid with a straw. Who remembers 'em? (leave a comment if you do!) Anyway the flavour reminded me of childhood and compliments the coca cola taste rather than overpowering it. I imagine this would be a great mixer with alcoholic (or non alcoholic!) drinks, and should definitely be chilled with lots of ice.

Yes, we have a winner, it's Coca Cola Zero Raspberry! This is one I would buy again regularly, and I suppose it's one that adults would enjoy whereas the strawberry one is more for kids. I rate this 9/10.

Have you tried either of these new Coca Cola flavours yet? If so which is your fave? Let me know in the comments!