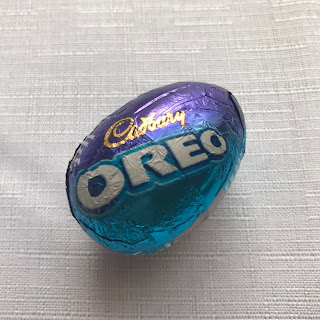 When this new "Oreo Crème Egg" was announced last year everyone got just a wee bit excited. It's not surprising, since the original Crème Egg still reigns supreme as the Number 1 Easter Egg in the UK (although the Reese's Peanut Butter Eggs available at Tesco could rival it!). So add to that another popular food item and you've got a winner, right?

I was a bit sceptical about how this would work - surely the cookie pieces would get soggy inside the goo? Luckily it didn't take too long to find out - these were available in shops just before Christmas Day, along with a variety of other Easter treats. I swear it gets earlier every year... 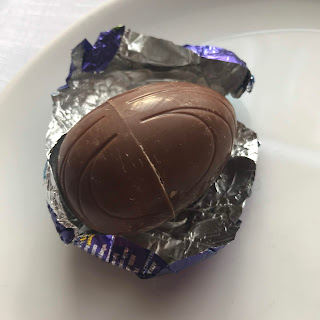 You can find these in most supermarkets now, and they're particularly prominent in Sainsbury's Express stores. Opening the wrapper, the egg has the classic Crème Egg design, but with a rather prominent section in the middle. I guess these are produced differently to regular Cadbury Crème Eggs. 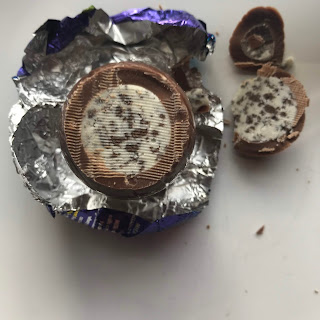 Cutting the top off with a knife revealed the Oreo cookie and crème filling below. And rather than being gooey like a crème egg, it turned out to be firm! Boo, what a disappointment. I suppose it shouldn't be a surprise really though, since gooey fondant would probably ruin the cookie pieces. 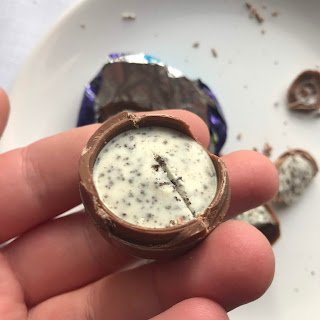 It's basically the Cadbury Dairy Milk with Oreo bar, but in egg form. Which means it's very tasty and moreish, and perhaps even more addictive in this form. It seems firmer in texture than the Oreo Egg N' Spoons that are also now available.

Overall, there's not a great deal to say about these, other than they're yet more tasty and moreish sugar bombs to ruin your January diet! I predict these will be very popular, although I do wish Cadbury would just bring out a White Chocolate Crème Egg - the competition to find one seems like such a tease!